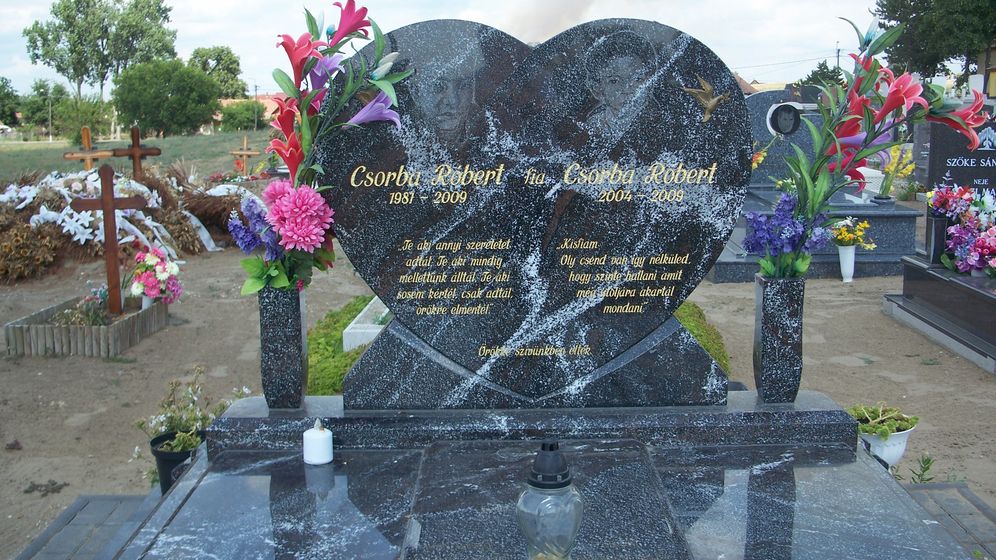 The murders happened just a few meters away. Each time she steps out of the door to her house, Erzsébet Csorba sees the burnt out ruins of the house where her son, her daughter-in-law and her grandchildren used to live.

Every day Csorba thinks about how she found her son Róbert bleeding in the snow, and how, later, her grandson Róbi was carried into the house, the four-and-a-half-year-old's lifeless body riddled with buckshot. "I wake up with the memories and go to sleep with them," says the 49-year-old. "How could they do they do it -- simply kill innocent people?"

The isolated village of Tatárszentgyörgy is located 55 kilometers (about 34 miles) south of Budapest. On the outskirts, several Roma families live in run-down houses. The Csorbas live in the last house before the edge of the forest. On Feb. 29, 2009, right-wing extremists set fire to Róbert Csorba's house and shot the family when they tried to escape. Father and son died. Both mother and daughter survived. The mother sustained minor injuries, while the daughter was more seriously wounded.

Six months later, in August 2009, the alleged perpetrators were apprehended: four fanatical right-wing extremists from the southeastern Hungarian city of Debrecen. Since 2008, they are thought to be responsible for murdering six Roma and severely wounding another 55 people, nearly all of them Roma -- a series of racist, terrorist killings the likes of which is unprecedented in Hungary's postwar history.

Over the next few days, after two years and 170 days of court proceedings, the trial against the four suspects will come to an end. On Wednesday, brothers István and Árpád K., as well as Zsolt P. and Isvtán Cs. will give their closing statements. The verdict is due by the beginning of August. There is little doubt as to the guilt of the accused: They have admitted their presence at the crime scenes, but they deny having committed the murders.

'No One Has Paid Their Respects'

As brutal as the deeds were, however, the public reaction in Hungary has been minimal, and hardly any wider debate has arisen from the conclusion of the trial. "These murders were crimes against humanity, yet they didn't shake Hungarian society," says Aladár Horváth, a Roma politician and civil rights activist. "On the part of the government, of the political elite, no one has paid their respects to the victims and their families. No one has taken responsibility, neither symbolically nor legally nor politically, and the family has not received any significant financial aid."

Indeed, former President László Sólyom, who was in office when the murders occurred and the suspected perpetrators were arrested, uttered not a word of sympathy for the victims. Even the socialists, who were in power during the Roma murders in 2008-2009 and put much stock in their anti-fascist image, offered only the standard clichés.

Now, the current conservative-nationalist governing coalition under Prime Minister Viktor Orbán wants nothing to do with the topic. They wouldn't want to scare their constituency, which extends far into the right wing of the political spectrum. Only the culture minister, Zoltán Balogh, recently managed to make a gesture: His ministry paid for the funeral for Erzsébet Csorba's husband Csaba, who died in February of this year after being overcome by grief about the murders.

The lack of public concern is also evident in the investigation of the "Roma Killers," and in the trial itself. It has become clear that that the far-right terrorists had the help of at least one more person and probably had several accomplices. Yet they are missing from the courtroom and it is unclear whether investigators are still looking for them. The trial is being kept secret for reasons of national security.

It's even possible that some of the murders could have been prevented. Two of the defendants had been monitored by intelligence agents because of right-wing extremist activity until 2008, shortly before the killing spree began, but then the officials shelved the operation. Another defendant was working as an informant for a military intelligence unit. But Hungary's intelligence community remains silent about its role in the murders.

There were also outrageous scenes that played out when authorities arrived at the crime scene. In Tatárszentgyörgy on the night of the murder, for instance, police tried to dissuade the Csorba family from reporting an attack and urinated on evidence at the crime scene.

Observers of the trial like liberal former parliamentarian József Gulyás, who was permitted to see secret investigation files, accuse the Hungarian authorities of sloppiness at the very least -- and Gulyás doesn't rule out a cover-up. He also criticizes the fact that the suspects were only charged with murder, not for terrorist offenses. "It seems as if the Hungarian government and the Hungarian authorities want to bring an end to the embarrassing affair while drawing as little attention to themselves as possible," says Gulyás.

Journalist and filmmaker András B. Vágvölgyi, who attended nearly every hearing, criticizes the "technical conduct" of presiding Judge László Miszori. "Political questions played hardly any role in the trial," he says. "A court has an obligation -- especially in a country like Hungary, which is entrenched in ideological and moral confusion -- to act with a certain moral weight."

Erzsébet Csorba, for her part, hopes that the accused "never again see the light of day." She, too, is convinced that there are more perpetrators who still walk free. But she, her children and her grandchildren continue to live in fear in their house at the edge of the woods. What she would like most is to build a high fence all the way around her property, but she doesn't have the money. Sometimes her teenaged sons and young grandson awake terrified in the night because they hear noises. "Go back to sleep," says Erzsébet Csorba, "it's only the shrubs and trees rustling in the wind." But she wonders silently if killers lurk outside once more.