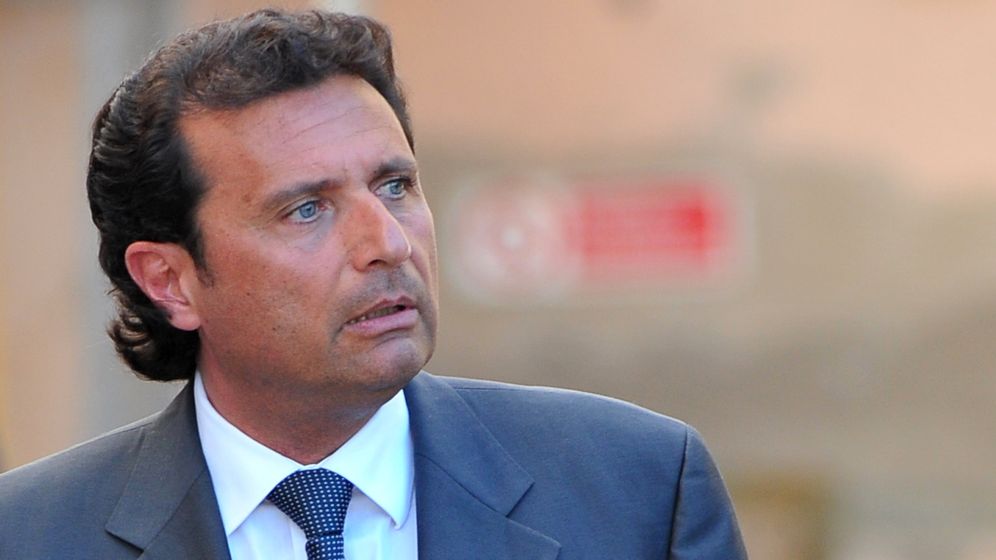 Francesco Schettino is wearing a poorly fitting gray suit, a tie that's too long and his eyes are an impressive cornflower blue. As always, he's also sporting a deep tan.

He's not a very tall man, and sometimes it seems like the captain of the Costa Concordia may even have shrunk a little bit from all the hateful accusations aimed at him from all sides. Thirty-two people died when the cruise ship under his command ran aground near the island of Giglio, Italy, on Jan. 13, 2012, including 12 Germans. On Wednesday, Schettino's trial finally began in the Tuscan town of Grosseto.

"I have come here because I want to understand what really happened," he told SPIEGEL ONLINE during a break in the proceedings at the Teatro Moderno, a theater that has been converted for the purposes of the trial. "I would like to do my part to ensure that the shipping industry learns from such disasters."

While that may sound noble-minded, it is likely to come off as a mockery to the families of the victims. Schettino is accused not only of having caused the accident by deviating from the normal route and navigating the ship through perilously shallow waters, but also of abandoning ship and manslaughter. A court official reading the charges on Wednesday said Schettino had abandoned the ship with "hundreds of passengers and crew still aboard, unable to care for themselves or in need of coordination as the ship's list increased." The ship was carrying around 4,200 passengers and crew when the accident occured.

Refused to Drop the Charge

Recordings of phone calls prove that Schettino left the sinking ship even though there were still passengers stuck on it and despite calls by port authorities for him to return to help them. Schettino's attorneys had called for this charge to be dropped. They claim Schettino didn't abandon ship and that he involuntarily fell into a lifeboat. But prosecutors have refused to drop the charge.

Shortly before the start of proceedings on Wednesday, the defense sought once again to secure a deal with prosecutors in which Schettino would admit his guilt and receive a sentence of three years and five months in exchange. However, it is very likely the plea bargain will be rejected by the public prosecutor and that Schettino will remain the sole target of prosecutors in the Costa Concordia disaster.

Schettino's former employer, cruise ship company Costa Crociere, agreed to a one-time compensation payment of €1 million ($1.31 million) to avoid prosecution. In return, prosecutors closed their investigation into the company. Prosecutors accepted plea bargains from five others, including helmsmen and other ship officers who were on the bridge with Schettino when the accident occurred. A judge is expected to rule Saturday on requests by the men for lenient sentences as part of their plea bargains.

Given the severity of the allegations against him, Schettino has little alternative but to cooperate and hope for the best. "Schettino is responsible for his actions," said his lawyer, Donato Laino. "But he can't take responsibility for errors made by others." If convicted of manslaughter and other charges, Schettino could face up to 20 years in prison.

Giovanni Puliatti, the head judge, seemed confident and assertive despite muggy heat during the hearing. He left no doubt that he wants the trial to be an expeditious one. Prosector Francesco Verusio said the goal is to rule in the case by spring or summer of 2014 at the very latest. "There is no doubt about Schettino's responsibility," he said. "This is just a question of the sentence."

After a strike by lawyers delayed the originally scheduled first day of proceedings, fewer members of the media were present on Wednesday. Some participants in the trial also dressed for that part of proceedings being held in the theater, coming in lime- and salmon-colored cocktail dresses and high heels as if it were a film premiere.

Witness Domnica Cemortan, a Moldavian dancer on board the Costa Concordia at the time of the shipwreck reads through legal documents before the start of the trial.

Domnica Cemortan, the Moldovan woman who was allegedly Schettino's lover and was reportedly on the bridge -- an area for which she didn't have authorized access -- at the time of the accident, was also present at the proceedings. She's one of 250 co-plaintiffs in the case. Schettino discreetly peered over at her several times, but they didn't otherwise appear to have any eye contact. "The captain isn't the only person guilty," she said. "I want the truth."

But the truth is always tricky, and it is now incumbent upon the court to cast light on this confusing puzzle of opinions, evidence, claims and memories relating to the night of the accident. Some 400 witnesses have been called to testify in the coming weeks.

Cruise line company Costa Crociere, a subsidiary of Anglo-American company Carnival, is also represented as a co-plaintiff. Turin-based layer Giuseppe Gallenca, also attending the proceedings, is calling for the company to be removed as a co-plaintiff. "Costa Crociere can't be allowed to pay damages and yet at the same time demand them," said the lawyer, who is representing two Italian families affected by the disaster.

"There is absolutely no doubt that we have suffered damages through the loss of the ship," an attorney representing the company countered in court. She said that while one could debate harm to the company's image, the material and economic damage is a fact. "We have every right to demand these damages," she said.

The court saw no conflict in the shipping company's dual role -- of being liable for civil damages on the one hand and as a co-plaintiff in the trial against Schettino on the other.

While the captain straitens his tie in the dock, co-plaintiff Herbert Greszuk has a different set of worries. The 64-year-old owner of a flower shop in the western German city of Recklinghausen, Greszuk is about to embark on a several week long therapy program. Since the night of Jan. 13, 2012, he has suffered from acute insomnia, plagued by nightmares and fears that even the strongest medications have been unable to alleviate.

"It is intolerable that Costa Crociere can buy itself free with a million euros," he says, furiously. When asked what he expects from the trial in Grosseto, he answers, "I would like to have faith in the Italian judiciary." 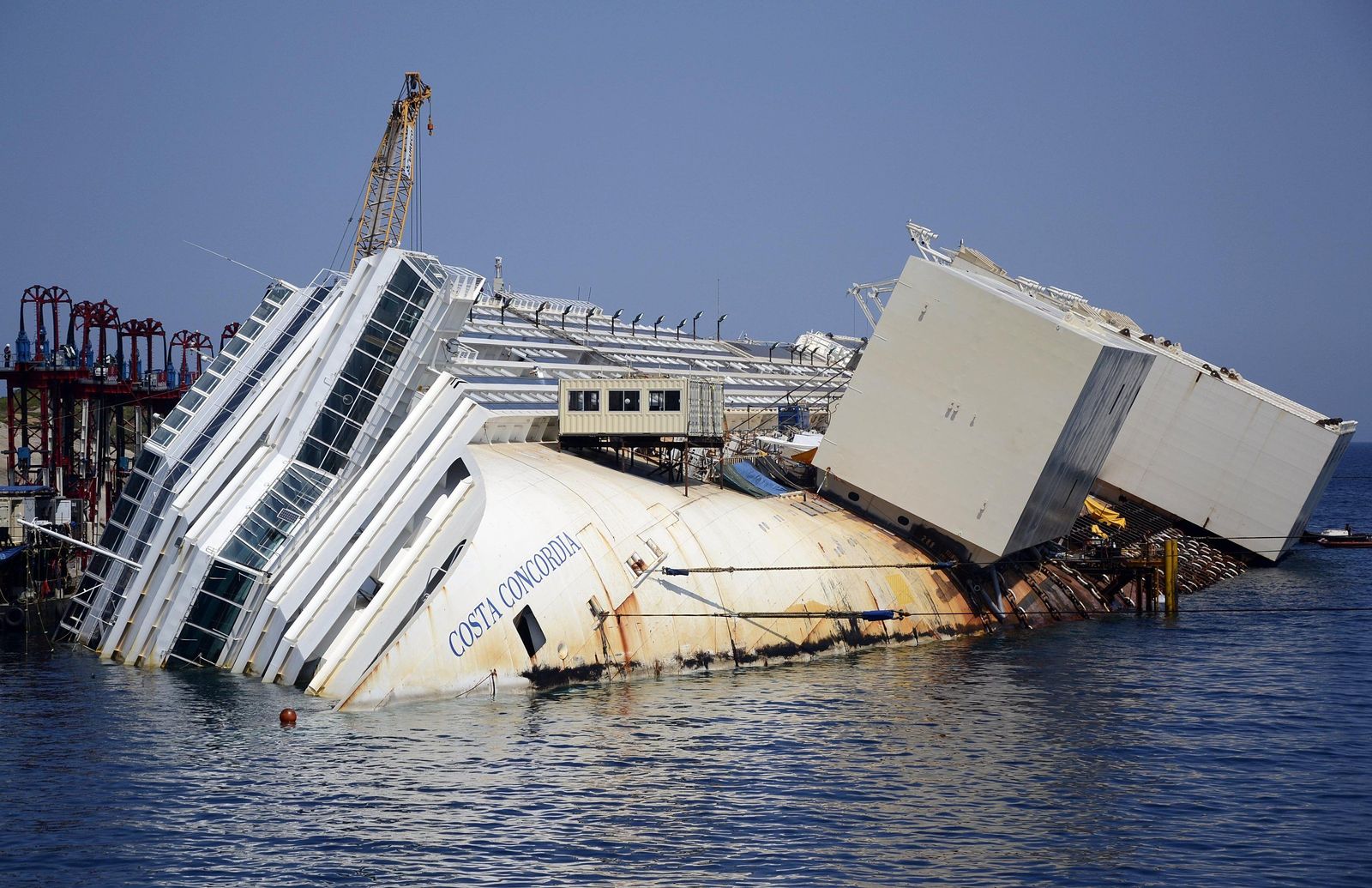 Some 100 engineers, 24 divers and roughly 100 additional specialists are working to extract the Costa Concordia. The plan is to make the ship float again so it can complete its final voyage. Never before has such a colossal cruise ship been raised to an upright position.