Across the 17-member euro zone, government heads had a hunch April 17 might not be a very good day for the future of Europe. The strong ballot box performance of the euroskeptic True Finns means it is very likely the party will be part of the next government. It appears that a country long seen as an EU anchor may soon become a source of irritation for Brussels and in capitals across the bloc.

During the election campaign, True Finn party head Timo Soini lashed out repeatedly against the European Union and bailout plans for debt-ridden euro-zone members. Bolstered by an election that saw the party more than quadruple its standing, with 19 percent of the vote, an emboldened Soini remained vocal on Monday, saying it was unacceptable that Finland "must pay for the mistakes of others." And that "the content of politics must change. We have been too soft on Europe."

Does the party represent a threat to the common European project? Do Finland's right-wing populists truly have the power to bring the euro to its knees? Or does it merely have the capacity to create a threat to the euro's stability and thus protract the current currency crisis?

If the party becomes part of Finland's next government, that answer could come within a matter of weeks. A coalition between the conservatives, who drew the most votes, the opposition Social Democrats and the True Finns is one viable option currently being discussed.

Will Remainder of Euro Zone Be Left to Foot the Bill?

Under current euro-zone rules, all 17 members must approve bailout packages for countries in need -- and next month, an €80 billion package for Portugal is up for approval. During the campaign, Finland's major parties said they wouldn't form a governing coalition with the True Finns if doing so would create a threat to the future of Europe's common currency. As such, it seems likely that, should the True Finns join the government, the party's euro-critical positions will be watered down. It remains possible, however, that a future Helsinki coalition could refrain from vetoing a bailout package for Portugal, but would then refuse to provide funding.

Were Finland to back out of any future rescue packages, it would have a significant impact on the common currency. The timing is bad, too, given that Europeans are currently faced with three euro-related problems that need to be solved at the same time:

Within the framework of the temporary rescue fund, all 17 euro-zone member states are providing credit guarantees valued at a total of €400 billion ($579 billion). In order to preserve the highest possible credit rating for the fund, however, a maximum of €250 billion from the fund can be lent to troubled euro-zone countries. Euro-zone leaders are now discussing nearly doubling the sum of money that is actually lendable as quickly as possible so that €440 billion can be disbursed in emergencies. That will be crucial if, following Ireland and Portugal, larger EU countries like Spain require bailouts in the future.

Looking ahead to elections in Finland, EU leaders in March delayed a final decision on the expansion of the existing bailout fund until June, well after Finns would go to the polls.

Finnish Pullout Would Be 'Politically Uncomfortable'

It is now possible that if the right-wing populists with the Real Finns party join the government, that a deal will be blocked by Finland or that the Finns place additional hurdles before passage. Helsinki is currently responsible for providing credits valuing €7.9 billion, representing a share of about 1.8 percent of the EFSF. Under the current deal, Finland would also have to increase its credit guarantees in proportion to its shares in the EFSF. By comparison, Germany is covering around 28 percent of the total sum. At €119.4 billion, that figure is almost 15 times greater than Finland's.

If the Finns decide not to take part in the expansion of EFSF, then other countries would have to plug the gap. Daniel Gros of the Brussels-based Center for European Policy Studies, however, says this wouldn't be a major problem. Still, he says "it would then be politically uncomfortable" because if one country decided to stop supporting the rescue program, others might soon follow suit.

Nevertheless, throughout its history, individual countries have demanded exceptions on a number of issues and the European Union has still managed to get by. Slovakia and the other new EU member states, for example, have been given a sort of discount on the amount they are required to put up for the permanent ESM rescue fund. The countries had complained because they felt they were being overly burdened by the bailout.

A Finnish 'No' Could Get Expensive for Germany

But the effect of a Finnish withdrawal would be greater on Germany than it would be on most other euro-zone member states. Germany and Finland, together with France, the Netherlands and Austria, are the only countries in the euro zone that possess the best possible rating, Triple A, from the ratings agencies. If one of these countries with the best credit ratings ceases to participate, the additional burden would likely fall on the other countries with Triple A ratings and not on countries with lesser ratings such as Estonia or Malta.

It could also create problems for the permanent European Stability Mechanism (ESM), which is expected to replace the temporary rescue package in 2013. ESM is intended to be able to loan a maximum of €500 billion. In order to be able to loan that much, the euro-zone states would have to put €700 billion into the fund. And in order to obtain the highest rating from ratings agencies, ESM would have to include credit guarantees totalling €620 billion. As security collateral, it would also have to include €80 billion in cash.

That would mean the first infusion of actual cash from taxpayers into a rescue fund since the start of the euro crisis. All of the bailout measures undertaken so far have been covered with credit guarantees, with the exposure to taxpayers existing only on paper -- at least until a country fails to repay its loans. But whereas Germany will have a share of 27.1 percent of the ESM, meaning €168 billion and €22 billion in cash reserves, Finland's share is also relatively small. The government would have to provide €11.1 billion in guarantees and €1.4 billion in cash. If the True Finns party becomes part of the coalition, it is conceivable that the Finnish government would either not participate in EFSF or ESM or that it will want to reduce its participation.

Close attention is being paid by the financial markets to the political tug o' war. "So far, there has already been a tendency towards palpable skepticism about further aid in the donor nations," analysts at Germany's Commerzbank have written. With the election victory of the euro critics, the bank's analysts write, the risk has increased "that a donor country will pull out of the rescue mechanism." They add: "A pullout by the Finns would mean more than a termination of solidarity because the agreement of all 17 euro-zone members is required to approve aid."

The analysts are referring to an important means of pressure the Finns have at their disposal. In order for the ESM to go into effect, the Treaty of Lisbon, which governs the workings of the EU, must be modified. The change would not require countries to cede sovereignty on any additional issues to the EU, but it would nevertheless require ratification by the national parliaments of member states, including the Eduskunta in Helsinki.

So the future Finnish government actually does have the ability to block the increased funding of the EFSF and the creation of the ESM. But that remains speculative at this stage. Ognian Hishow, an expert on EU integration at the German Institute for International and Security Affairs (SWP), doesn't believe that Finland would withdraw from the currency union or the EU. "Finnish companies wouldn't tolerate that," he said, adding that the financial risks would be too great. "Finland has so far done well with the euro," Hishow said. "Reason will prevail in the end."

Nonetheless, the Finns could stir up trouble in terms of disbursing financial aid for Portugal. A unanimous decision is required by all euro-zone finance ministers in order to disburse loans under the current EFSF agreement. This is expected to take place in May. In the worst-case scenario, this would provide the Finnish finance minister with an opportunity to strike. He could demand that Finland would only agree to the bailout if Helsinki didn't have to participate financially.

Given the relatively small, single-digit billion volume of Finland's share of the bailout, this quasi veto power probably wouldn't threaten Portugal's bailout. But economist Gros at Center for European Policy Studies argues that the political symbolism of a pullout would be important, especially if other countries followed suit -- particularly countries that have been leaders in a united Europe until now. Gros says it could create huge problems if sentiment like that crossed over into Germany.

"The overall political picture in Europe has worsened," Gros said. 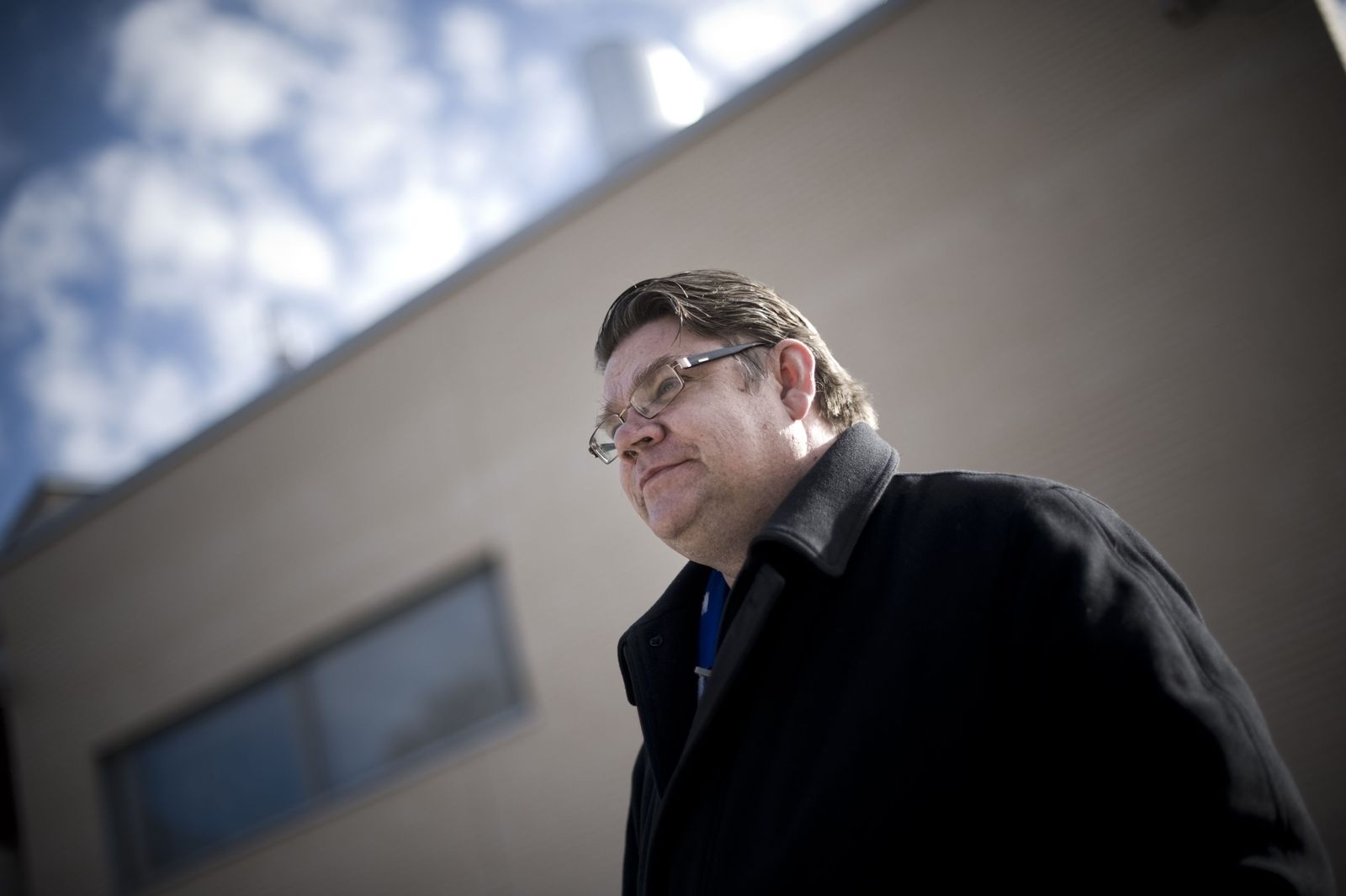