The good news is that Greece is not going to go bankrupt -- at least not this month. Despite Athens facing a €3.2 billion ($3.96 billion) bond repayment in August and rapidly running out of cash, the European Central Bank (ECB) last week rubber-stamped a request from the Bank of Greece, allowing it to boost the amount of money it can loan to the Greek government. The move should keep the country's head above water at least until September.

After that, though, all bets are off. The country's international creditors, represented by the troika of the European Commission, the ECB and the International Monetary Fund, left Athens on Sunday, but not before getting the government of Prime Minister Antonis Samaras to agree to push forward far-reaching reforms and further savings measures -- all of which promise to be difficult to push through in the face of increasing weariness on the part of Greek voters.

Furthermore, there are new indications that the euro zone's biggest paymaster, Germany, is rapidly losing its appetite for footing the bill and that Chancellor Angela Merkel will have difficulties keeping her coalition together in the face of difficult currency challenges to come.

"According to my forecasts, Greece should leave the euro zone by the end of the year," said Bavarian Finance Minister Markus Söder, a member of the Christian Social Union (CSU), the Bavarian sister party to Merkel's Christian Democratic Union (CDU) and a crucial part of her governing coalition.

That, though, wasn't all. "Each new aid measure, every easing of the demands, would be the wrong path," Söder said in comments to the Sunday tabloid Bild am Sonntag. He added that "Athens must become an example demonstrating that this euro zone also has teeth." Just in case his message hadn't quite gotten through, he added: "At some point, everyone has to move away from mommy. For Greece, that time has come."

A Pattern of German Skepticism

Reaction to the comments has been prompt. Social Democratic Party deputy floor leader Joachim Poss noted that "Markus Söder has always been an unprincipled rowdy." His counterpart with the CDU, Michael Meister, told the Berlin daily Tagesspiegel that a Grexit debate is damaging and unhelpful. Even German Foreign Minister Guido Westerwelle threw his hat in the ring, saying in a statement that "attempts to raise one's domestic political profile cannot be the benchmark of our actions in Germany or in any country in Europe."

Nevertheless, Söder's comments fit it well with an increasing pattern of German skepticism regarding Greece. Indeed, Horst Seehofer, the head of the CSU, also said recently that aid to Athens had reached "the limit of what is acceptable." It is a stance that have some concerned that the CSU, facing a tough state election next year, might turn to anti-euro populism in an attempt to get votes -- an eventuality that could be extremely damaging for Merkel's coalition.

But its not just the CSU that has been increasingly hostile to Greece recently. Indeed, Söder received instantaneous support from the Bavarian economics minister, Martin Zeil, who is a member of the Free Democratic Party (FDP), Merkel's junior coalition partner in Berlin. "Those who are not able to fulfil the regulations that apply to all should leave the euro zone," he said.

His comments echo controversial statements made by Philipp Rösler, who heads the FDP and is Merkel's deputy chancellor. "If Greece no longer meets its requirements, there can be no further payments," Rösler said on German public broadcaster ARD. "For me, a Greek exit has long since lost its horrors."

For now, at least, Greece's detractors in Germany are going to have to wait. The Samaras' government reached an agreement with the troika on Sunday on further austerity measures aimed at eliminating some €11.5 billion in spending by 2014. "Talks went well, we made good progress," IMF mission chief Poul Thomsen said on Sunday.

'Nobody but the Greeks Can Be Blamed'

The troika's verdict is crucial because it will determine whether Greece can continue to draw on the €130 billion bailout package that is currently keeping the country afloat. Samaras had asked the troika for two additional years to meet austerity and reform obligations due to a worse than expected economic situation and political turmoil resulting from two general elections this year in the space of just a few months.

International appetite for such a delay -- particularly in Germany -- is limited, however. Now Athens has promised to move forward on significant structural changes aimed primarily at liberalizing the labor market in addition to further public sector cuts. Domestic opposition, though, promises to be significant and unions in particular have signalled their resistance to reform efforts. Samaras may be in for a difficult political battle.

Söder, for his part, doesn't seem to care. "Any further assistance for Greece is like pouring water into the desert," he said on Sunday. "Nobody but the Greeks can be blamed for the problems in Greece." 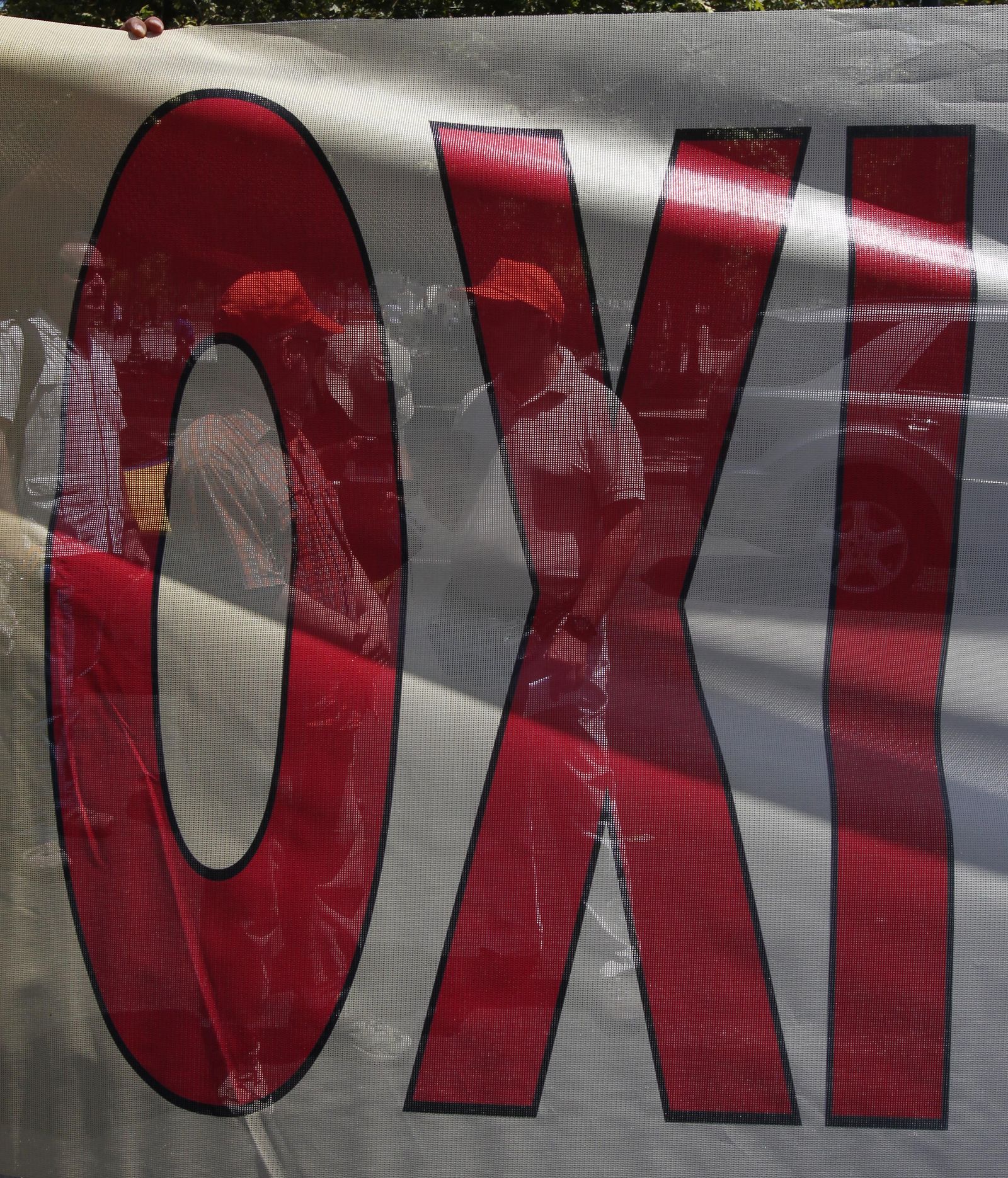 Greek civil servants protesting behind a sign reading "NO!" in late July.