It may be just nine pages long, but the report by the European Commission, European Central Bank (ECB) and International Monetary Fund (IMF) packs a punch. According to the keenly awaited report, which has been obtained by SPIEGEL ONLINE, it is unlikely that Greece will be able to return to borrowing money on the capital markets in 2012 as previously foreseen -- meaning European taxpayers will probably have to prop up Greece with billions in payments for much longer than was originally planned.

The troika's prognosis is bleak. Although there is some evidence that "the rebalancing of the economy is ongoing and the quarter of deepest contraction (has) already been passed," the report warns that "a further contraction in real GDP is still expected in the second half of 2011." The real GDP growth rate for 2011 is now protected to be minus 3.8 percent, the authors conclude, adding that positive growth rates are not expected before 2012. Even then, they will only be "moderate."

The current negative outlook presents the troika with a major challenge. The IMF's statutes stipulate that the organization can only lend a country money if it is certain that the state will be able to meet its payment obligations for the next 12 months.

The new report has now made it clear that Greece is not in a position to guarantee that, meaning that the IMF cannot transfer any more money while there is still a chance of Greece defaulting within the coming 12 months. "Given the remoteness of Greece returning to funding markets in 2012, the adjustment program is now underfinanced. The next disbursement cannot take place before this underfinancing is resolved," the report concludes.

This in turn means that Europe will have to come up with a new rescue package. German Finance Minister Wolfgang Schäuble estimates that Greece will need €90 billion ($132 billion) to cover its funding needs between 2012 and 2014, according to government sources quoted by the news agency DPA on Wednesday evening. Luxembourg Prime Minister Jean-Claude Juncker, who is head of the Euro Group, has also mentioned the same figure. On Wednesday, following a telephone conference of euro-zone finance ministers, Juncker said that Athens' privatization plans should bring in €30 billion, covering one-third of the needed funds.

But a new bailout for Greece could be a tough sell for the euro-zone member states, which will have to get their national parliaments to approve a new package. The German government will find that especially difficult, given domestic resistance to providing Athens with more funds.

Fears of another Lehman

In May 2010, the European Union and the IMF put together a €110 billion rescue package for Greece. The original bailout plan foresaw Greece returning to capital markets in 2012. Until then, the so-called troika of the European Commission, ECB and IMF needs to transfer money to the highly indebted state at regular intervals. Without this support, Greece would effectively be bankrupt. Presently, few investors are willing to lend the country money, and those who are would demand a staggeringly high interest rate of 15 percent. Investors consider the risks to be too great.

Many experts believe that a Greek default could have horrendous consequences, with some even fearing it would cause the breakup of the euro zone and lead to turmoil in the financial markets. The fallout might even exceed the impact of the Lehman Brothers bankruptcy in 2008, which triggered the global financial crisis.

According to the troika report, it will be difficult for Athens to regain the necessary investor confidence that would allow it to borrow money on the capital markets. "The recession appears to be somewhat deeper and longer than initially projected," the report reads. The country's gross domestic product (GDP) shrunk by 4.5 percent in 2010, the authors write, more than had been assumed at the start of the rescue efforts.

The EU-IMF aid is paid out in tranches, with each new installment dependent on Athens meeting certain conditions in sorting out its finances. But reforms aimed at reducing the country's huge levels of public debt -- which currently stands at around €350 billion -- have stalled. Although the Greek government made a "strong start" in reducing its macroeconomic and fiscal imbalances, the implementation of necessary reforms has come to a "standstill" in recent quarters, the report reads. Greater efforts are needed to combat the country's rising public debt, the troika says, arguing that structural reforms that would underpin the economic recovery need to be stepped up.

In 2010, Greece's budget deficit was equivalent to 10.5 percent of GDP -- way over the 3 percent allowed under euro-zone rules. But Athens is struggling to reduce its debt burden, because tough austerity measures are hindering the economic growth that is necessary to generate tax revenues. "If no action was taken, the government deficit in 2011 would remain close to the 2010 level," the report reads.

Meanwhile, the German government, which had said it would wait for the publication of the troika report before deciding how to proceed, has been trying to win support for a new rescue package for Greece. On Wednesday, Chancellor Angela Merkel and Finance Minister Schäuble argued in favor of a new bailout during a meeting with the parliamentary groups of the governing parties -- the conservative Christian Democratic Union, its Bavarian sister party the Christian Social Union and the business-friendly Free Democrats -- according to participants quoted by DPA. Merkel also expressed her support for Schäuble's initiative to involve private creditors in a new rescue package.

The only problem is that there are fewer and fewer private creditors to involve. Private institutions are selling off Greek government bonds on a large scale amid fear of a default or a so-called haircut. It is mainly public institutions such as Germany's state-owned regional banks and the European Central Bank who still hold Greek bonds.

According to a report in the German daily Die Welt, German insurance companies now only hold €2.8 billion in Greek debt, down from a total of €5.8 billion just a year ago. Similarly, German banks have sold off around a third of their Greek debt since May 2010, according to new Bundesbank figures quoted by the Financial Times Deutschland on Thursday. German banks only held around €10.3 billion in Greek bonds in January and February 2011, compared to €16 billion in April 2010. 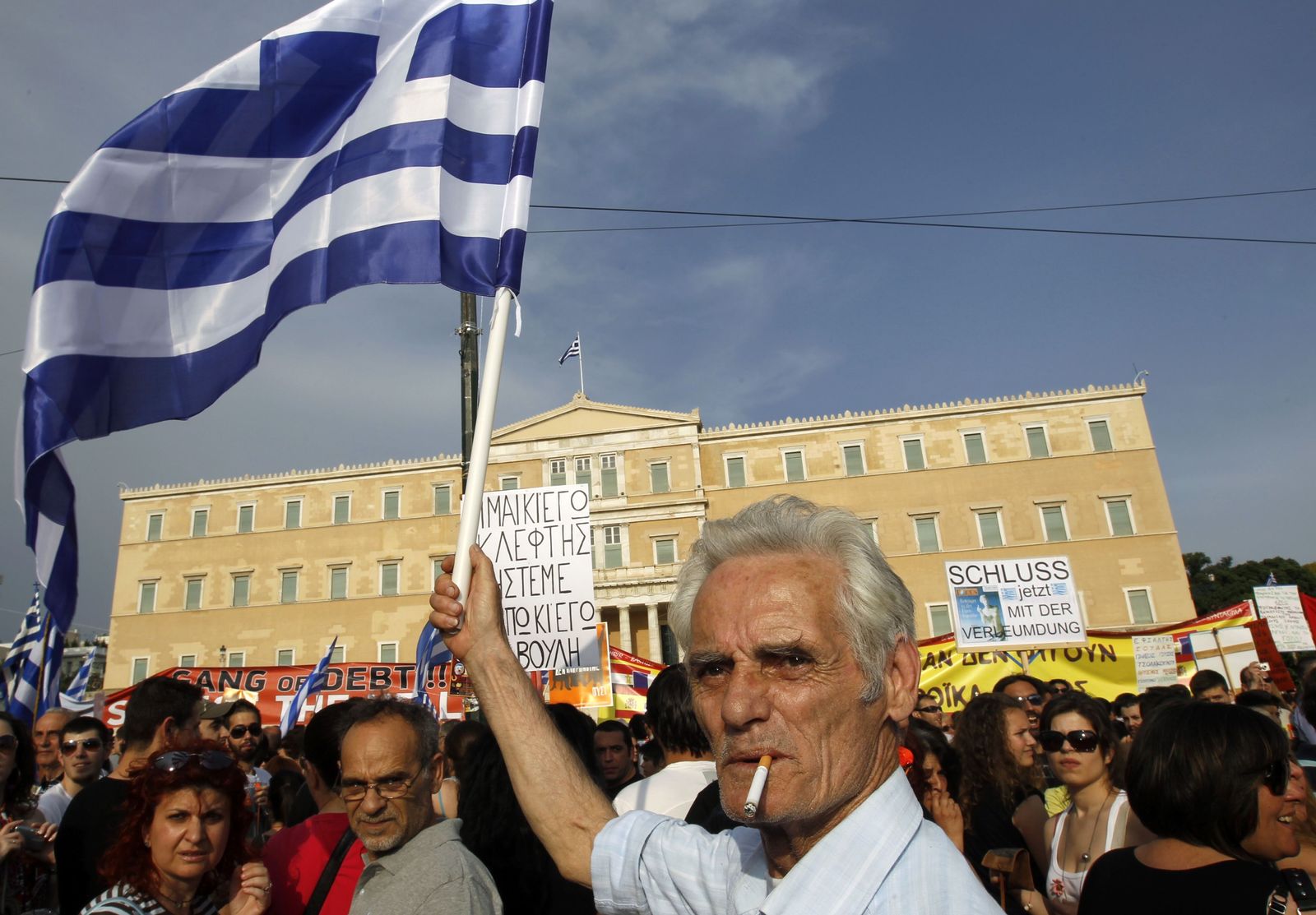 Greeks protest against austerity measures outside the parliament in Athens on June 5.