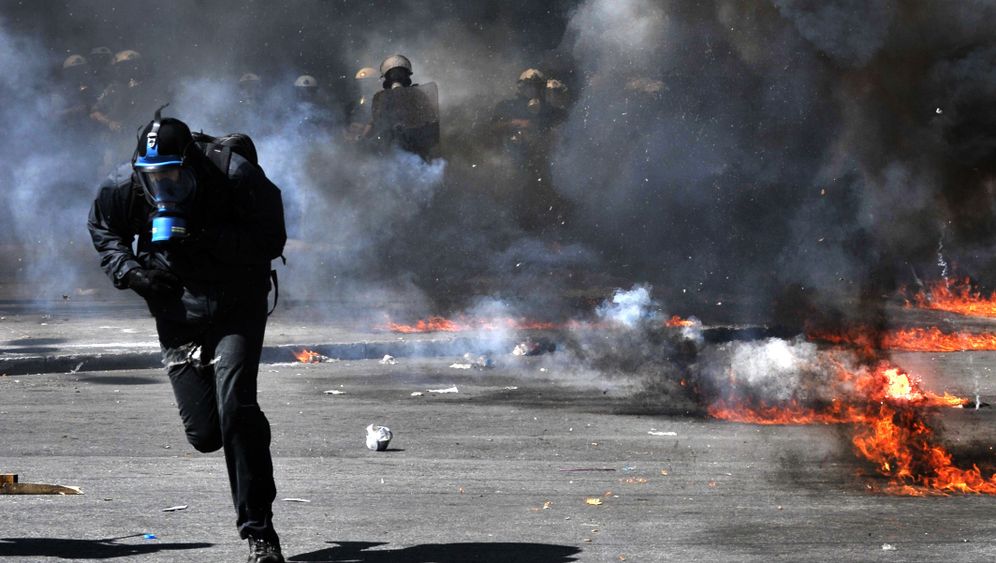 They're at odds, once again. The recent standoff in Athens between Poul Thomsen, chief envoy of the International Monetary Fund (IMF), and Greek Finance Minister Yannis Stournaras was, by all accounts, rather heated. Stournaras even threatened to resign rather than implement the cuts Thomsen was calling for, reported the New York Times.

"It doesn't matter to me," the IMF envoy allegedly replied, and then left.

On Friday, Sept. 21, it was time for the "Men in Black," as the Greeks call them, to depart once again -- without having accomplished anything. The troika, consisting of representatives of the IMF, the European Commission and the European Central Bank (ECB), had had enough.

It isn't the first time that Thomsen and his colleagues have ended their visit prematurely, and it's also nothing new that they are unable to agree with their Greek counterparts over what is to be done. At the moment, the effort to rescue Greece is mainly characterized by one thing: a gloomy sense of déjà-vu.

Despite his words, of course it matters to Thomsen whether or not he and the Greeks reach an agreement. The goal, after all, is to rescue the country and make sure it stays in the euro zone, no matter what the cost -- which is why the three envoys from the troika returned to Athens on Sunday. They want to finally conclude the negotiations over a package of austerity measures designed to save more than €11.5 billion ($14.7 billion). It was supposed to have been concluded in June and is a condition for the second loan agreement. The government also hopes to collect €2 billion in additional tax revenues.

The measures have yet to be adopted by the government or ratified by parliament, but the country has nevertheless been wracked by new protests. Tens of thousands took to the streets in Athens alone, and a demonstration on Syntagma Square in the capital turned violent last Wednesday when protesters threw bottles and rocks, while police used tear gas and stun grenades to disperse the crowd. Nevertheless, the troika and the government will almost certainly come to an agreement once again. And the burden of the cuts will be borne, once again, by those who already have little left to lose: workers and retirees, the sick and the disabled.

Their rage is understandable, especially in light of the fact that more affluent Greeks, and not just ship owners and construction magnates, have already safeguarded their assets. A list currently making the rounds in Athens contains the names of 33 politicians who have amassed unusually large sums of untaxed assets in their accounts. The speaker of the Greek parliament has stepped down in the wake of corruption allegations.

Still the EU seems determined to push forward with its strategy. For Thomsen and his colleagues from the European Commission and the ECB, Matthias Mors and Klaus Masuch, this makes the mission difficult if not virtually hopeless. Their task is to write a report that permits the creditors to disburse the next €31.5 billion tranche of aid money to Greece so that the near-bankrupt country can remain in the euro zone for the time being. This is what the politicians want.

At the same time, however, the troika representatives have been tasked with finally compelling Greece to move forward with the reforms they have been announcing for the last two-and-a-half years but have yet to implement.

'Greece Is Not Alone'

The motives for rescuing Greece are transparent: The euro zone is in such bad shape, with the potential for serious meltdowns in Spain and Italy, that politicians are determined to avert a "Grexit." The consequences of a Greek withdrawal from the euro zone seem incalculable, and the rest of Europe is terrified at the prospect. The domino theory is no longer being discussed as a possibility, but rather as a likely scenario. Europe's leaders are determined to avert a total collapse of the euro zone.

"France and Italy will not support a withdrawal from the euro," says a representative in charge of helping the Greeks with administrative reform. It is his fourth visit to Athens since the new government of Prime Minister Antonis Samaras came into office. He says that he is "not optimistic" about the success of the reform, and that only one thing is clear: "We will continue to pursue our current course."

This is somewhat surprising, given that it is not even clear how the foreign experts sent to assist the government with its reforms will be paid in the future. The envoys' home countries are currently paying them, while the European Commission is reimbursing them for travel costs.

Initially, it was expected that Greece would shoulder the costs, using the €400 million at their disposal in the so-called social fund. But the government has neglected to claim the money, says a European Commission official. This explains, for example, the lack of progress in reforms at the municipal level, for which Germany is responsible. Experts with the Agency for International Cooperation, working on behalf of the German Economics Ministry, spent six months developing a roadmap with the Greeks. But none of it has been put into practice yet, because the funding remains unclear.

There is a similar dilemma in the healthcare sector, where Germans and Swedes are helping the Greeks with hospital management and transitioning to an electronic prescription system. After having already spent several million euros on the program, Germany and Sweden are irritated over the Greeks' inability to collect the necessary funds in Brussels.

Worse, no one believes any more that Greece is capable of managing their reform on their own. Cuts alone are not structural reforms. But the somewhat aimless status quo will continue, as recent statements made by IMF Managing Director Christine Lagarde suggest. Lagarde, who expressed more sympathy for African children than for the Greeks in the spring, can now "easily imagine an extension of the Greek adjustment program."

Her mood change cannot be the result of any Greek eagerness to implement reforms. In fact, it would be generous to refer to the Greeks' approach to reforms as sluggish, no matter how gracious the troika has been about the new government.

"The ministers are now proving to be more cooperative," says one member of the task force. Some of them are even familiar with the numbers that are stake, says another member, who sounds genuinely surprised.

The lack of reforms is still the main sticking point. The crisis has not improved the Greeks' attitude to taxation, but some of the blame also lies with the government, which owes the private sector about €7 billion. For years, it used services and awarded contracts, for everything from air-conditioner repairs to rents, without paying for them.

In what was billed as the "biggest privatization scheme of all time," the government was originally expected to raise €50 billion through the sale of state-owned assets. In January, however, the head of the privatization agency admitted that the target number had been chosen largely at random.

He resigned in June. Since then, government agencies have continually revised their targets downwards. So far, Greece has only managed to collect €1.5 billion from the sale of state-owned property. In light of the difficult situation, the World Bank is now expected to join the rescue effort. Experts from Washington hope to make the country more business-friendly and create incentives for investors. This is something of a last-ditch effort, says a senior EU intermediary who commutes between Brussels and Athens and works closely with both the troika and the Greek ministries.

It seems unlikely to help. After all, Greece is already getting a prodigious amount of international expertise. But it doesn't seem to be helping. There is every indication that the country will continue to be dependent on financial aid after 2014. Greece's debt burden is overwhelming and will remain so for as long as the country remains in the euro zone, the recession is alarming and growth is insufficient, no matter how many envoys are sent to Greece.

Another debt restructuring would be one way of liberating the Greeks from their burden. But this would require the country to be streamlined to the point where it wouldn't immediately take on new debt. It would have to be able to provide basic services to its citizens using the revenues it has available.

Greek politicians have not shown much of an ability to achieve such a thing on their own. And Greeks don't trust them anyway. According to a recent survey, 79 percent of Greeks are dissatisfied with the job their government is doing. Nevertheless, about the same percentage still believes in Europe and the euro.

Antonis Manitakis, a former professor of constitutional law and now the country's minister for administrative reform, has an office on upscale Vassilis Sofias Street. The international envoys like him and he is one of the politicians on whom they are pinning their hopes. He is not a partisan politician, but rather one of those who are familiar with the numbers. Together with French administrative experts, Manitakis has determined that the government bureaucracy will shrink by 184,000 people by 2015 without requiring any job cuts. Under the troika's objectives, government jobs would have to be reduced by 150,000.

His number will be reached through retirement and early retirement alone, says Manitakis. Public service is no longer as attractive as it used to be, now that wages have been cut. The troika has checked and confirmed his estimate, and it will be mentioned in a positive light in its report.