Ewa Wieczorek knows she will face sharp criticism when she prints the report in her magazine. It is about female guards at the Stalin Museum in Gory, Georgia. By day, the guards watch over the shirts and pipes of the dictator and, by night, they dream that he will come to their beds.

Stalin had close to 200,000 Poles killed and the story is bound to trigger floods of letters to the editor. But Ewa Wieczorek, a girlish 43-year-old woman with a short haircut, is used to criticism. She says that she wants to know what motivates these women to continue their worship of a mass murderer today. 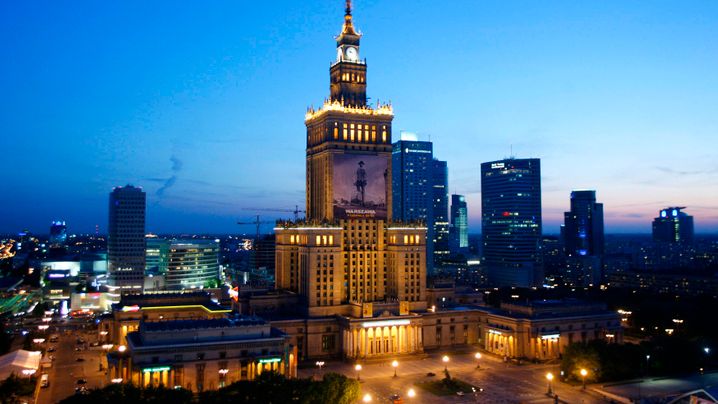 Wieczorek is the editor-in-chief of Wysokie Obcasy (High Heels), Poland's leading women's magazine. The magazine, published Sundays as a supplement to Polish daily newspaper Gazeta Wyborcza, can be described as a cross between a high-brow cultural magazine and Cosmopolitan. Gazeta Wyborcza, with a circulation of about 500,000 copies, was the first uncensored newspaper in the Eastern bloc in 1989.

Eight female editors write for Wysokie Obcasy, touching on subjects that were long taboo in Poland. Articles describe people cheating on their spouses and women taking on traditionally male professions. They are about abortion, pornography and sex during pregnancy. They write headlines like "A Woman is Not a Lamp," an opinion piece in which the writer argues that women should not have to respond to demands of sex, like a light being switched on.

They are the kinds of subjects that still shock many in a deeply Catholic country like Poland.

The editorial offices are housed in a minimalist steel-and-glass building in the Mokotów neighborhood of Warsaw. Wooden blinds hang in front of the windows and expensive mountain bikes are parked in the hallways. The success of Wysokie Obcasy is a sign of the enormous social change in Poland since the fall of communism. In the last 20 years, Polish women have achieved as much as women in the West took many decades to achieve. For women in Poland, the end of communism translated into a sort of turbo-emancipation.

Statistically speaking, Polish women are among the most modern women in Europe. They are behind one in three new business startups, putting Poland ahead of many other European Union countries. They occupy more than a third of positions in middle management, a record which is only beaten by France, Latvia and Lithuania. And the Polish birth rate, long one of Europe's highest, is now one of its lowest, at 1.4 children per woman. "We are no longer willing to be tied down to the mother role," says Wieczorek.

Wysokie Obcasy chronicles the change that Wieczorek herself symbolizes. She has a 22-year-old son from her first marriage who plans to attend the university. She divorced his father after the Soviet bloc collapsed, scandalous behavior by Polish standards at the time.

The communists did little to change the traditional image of women in Poland. After the war, women were expected to have children, and after that the communists sat them on tractors, sent them to universities and had them work in mines. "It had nothing to do with self-realization, but a lot to do with duty," says Wieczorek. "The Polish woman has to work, and yet she carries the main burden in caring for the children and in the household."

When the Soviet bloc collapsed, the old order fell apart, while the transition back to capitalism destroyed the previous role models completely. Nowadays, very few families with more than one child can survive on only one salary. As a result, many women are forced to create their own companies, from translation agencies to hairdressers to shops. These are the kinds of businesses that are most compatible with children, an important factor in a country like Poland, where preschool and kindergarten places are rare.

But women also occupy key positions today. Since 1999, the Polish Confederation of Private Employers has been headed by a woman, Henryka Bochniarz. Warsaw Mayor Hanna Gronkiewicz-Waltz, a law professor, ran the country's national bank during eight difficult years of transformation.

A woman is also in charge of Evip, one of the country's most successful management consulting firms. The company's achievements have included introducing Coca-Cola, Shell and Saudi Arabian investors to the Polish market. Only 10 years after the fall of communism, a group of successful women developed their own network, the "Club of the 22."

The up to two million Poles who emigrated in past years have played an important role in this revolution. Most worked in Scandinavia, Great Britain or Ireland, and now more and more are returning to Poland. They include women who learned to make it on their own while abroad.

Dr. Irena Eris, 60, an icon of all independent women in Poland, leans back in a leather chair in her office on the top floor of her villa on Pulawska Street. The walls are painted the color of champagne, and the furniture is made of expensive wood.

Eris wears her hair in the style of US Secretary of State Hillary Clinton, and she is wearing a grey sweater with a knee-length skirt. "Many women here believed for a long time that they didn't have the right to succeed," she says, adding that Polish women long had an inferiority complex.

Today she owns Poland's most successful cosmetics company, and the Wall Street Journal named her as one of the 10 most effective female business executives in Central and Eastern Europe. The company is named after her, and jars and tubes with the words "Dr. Irena Eris" printed on them can be found in millions of Polish bathrooms today. She exports to 20 countries, and her Eris skin creams will soon become available in a few Rossmann drug stores in Germany.

Eris earned a doctorate in pharmacology at Berlin's Humboldt University at the beginning of 1978. When she returned to Poland, General Wojciech Jaruzelski, the country's communist head of state, ordered the Solidarnosc movement crushed. The deeply disappointed Poles retreated into private life.

Eris, however, rented two rooms in Piaseczno, a suburb of Warsaw, and quit her secure job with a government-owned pharmaceutical company. She says: "I wanted to produce something special, and to apply all of my knowledge to it." The result was her first Dr. Irena Eris face cream.

From Suspicious Woman to Role Model

When she introduced her product to the market, there was little more than pickles and "Sport" cigarettes on the shelves of Polish shops. Her husband transported the products from store to store in the trunk of his Polski Fiat. She had 12 employees by 1989, and today she employs more than 800 people. Eris produces creams and shampoos, and she supplies drug stores and cosmetic studios. The company also owns two spa hotels, including Poland's first five-star spa in Mazuria, with 35 treatment rooms, Ayurvedic treatments and Cleopatra baths.

"Suddenly I was a successful businesswoman," she says. "I went from being a businesswoman hounded by a suspicious government to a role model -- because I give people jobs and because I'm a woman." But even Eris is the first to admit that even though the old gender roles are a thing of the past, Poland is still a long way from equal rights for women.

The Catholic Church and the majority of Poles living outside major cities still see the new role of women as an affront to the divine and national order. Catholicism remains a key ingredient of Polish identity. Ninety percent of Poles are baptized in the Catholic Church, and many are convinced that the only reason their country still exists is that faith alone has allowed it to prevail against foreign rulers like the Germans and the Russians.

Poland's abortion laws, among the strictest in Europe, are also one of the legacies of Catholicism. They permit abortion only in a few exceptional cases, including rape, severe deformities and danger to the life of the mother. Nevertheless, an estimated 80,000 to 200,000 abortions are performed illegally each year. Women from areas near the German border travel to Germany, and in Poland many doctors terminate pregnancies in return for cash. A documentary film on the subject is currently doing very well in Polish cinemas.

Author Agnieszka Graff, one of the mentors of the Polish women's movement, is a slim, attractive woman who speaks quickly. She is used to being interrupted by men, which she hates.

She says that she was shocked when she returned home in 1995, after studying in the United States and Great Britain. "Even in the academic world, Polish men conversed with women exclusively at the flirtation level. Serious conversations were impossible." In those days, says Graff, Poles played down domestic violence by pointing out that at least Polish men still greeted women by kissing their hands -- an indication, they insisted, of a level of refinement lacking in the Germans.

Graff decided to take her opposition to these circumstances to the streets. The first protest took place 11 years ago when, on March 8, International Women's Day, 200 women marched on Warsaw's New World Boulevard. Last year's march attracted 6,000 women. According to Graff, Poland's accession to the European Union in 2004 was an important step, because it forced Poland to add language opposing discrimination and sexual harassment to its labor laws.

Graff is pleased with the successes of recent years. Much of what she still deplores today also applies to the rest of Europe. For instance, women are still paid less on average than men for the same work, and they rarely reach the highest levels in their chosen careers. But Graff also knows that there are still influential forces in Polish society that see the new role of women as a threat and want to prevent any changes to abortion laws in the near future.

This has prompted Graff and many other women to demand a stronger say in politics. They want a quota system, under which political parties would be required to reserve at least half of the slots on their election lists for seats in local parliaments and the lower house of parliament in Warsaw, the Sejm, for women. Activists have already collected close to 150,000 signatures to support their movement.

The Polish right wing sees efforts like these as a threat to national harmony. Bishops argue that the Polish mother has safeguarded the continued existence of the nation for centuries, and that she should not challenge men for new rights now.

"Parity," as the quota is called in Poland, "divides society into even more groups," says a concerned commentator with the Warsaw newspaper Rzeczpospolita.

But pollsters note with surprise that the majority of the population -- 70 percent of women and 52 percent of men -- favors a quota. Sociologists attribute this to the fatal reputation of members of the Polish parliament, which has been dominated until now by men, who are considered corrupt and power-hungry. Many Poles are apparently counting on women to improve the political culture.