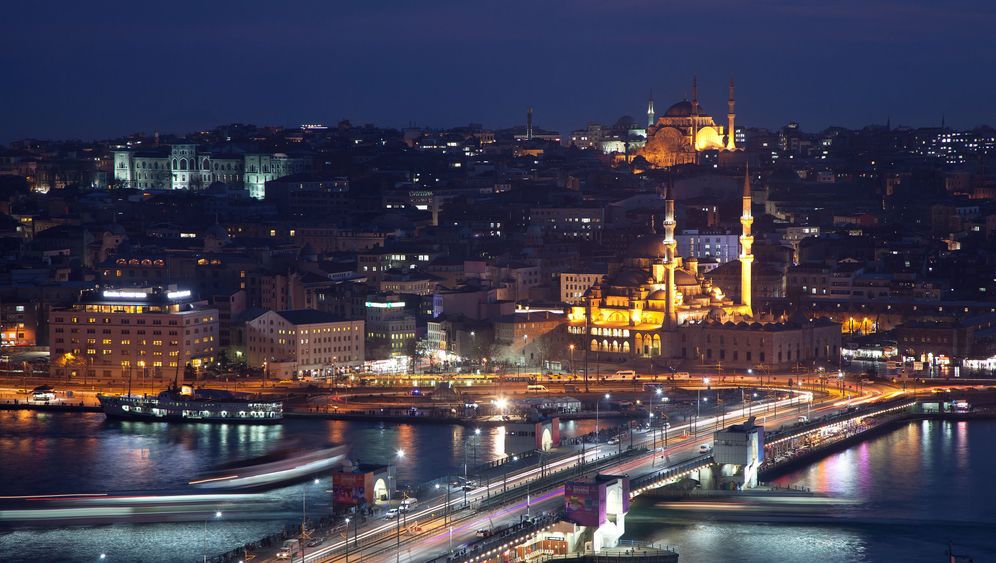 Newspaper seller Menderes is beaming: "Everything is great!" His newsstand is located at the Kadiköy ferry landing on the Asian side of Istanbul. Business is going well these days -- and not just for Menderes. The Turkish economy is booming, registering the second-fastest growth rate in the world last year at 8.5 percent. The country has a young population and the consumer culture is robust.

Menderes doesn't shy away from making comparisons to Europe when it comes to the economy, either. "There is no crisis in Turkey," he says. "Our Prime Minister (Recep Tayyip) Erdogan is doing a good job!" When asked what he thinks of Turkey's long-standing bid to become a European Union member state, the 30-year-old says he is no longer interested in the subject. "We don't want to be dependent on others," he says. "We are stronger on our own."

Menderes is far from alone in this thinking. In 2004, shortly before the start of accession talks with Brussels, polls showed that 75 percent of Turks still wanted their country to become a member of the EU. Now that figure has plunged to less than 50 percent. "Public enthusiasm for the EU began to wane years ago," explains Istanbul-based political scientist Cengiz Aktar. "The euro crisis has strengthened that trend."

For years,Turkey had been forced to wait at Europe's gate, but now the country has found a new self-confidence. The government in Ankara has said that EU membership remains a long-term goal, but that it won't come at any price. "We still believe that Turkey should join the European Union," Turkish Finance Minister Mehmet Simsek said in the fall of 2011, but he added that joining the euro would not be a very attractive option even if, "with its healthy economy and reasonable budget policy, it would certainly be more on the side of Germany than on that of the euro countries" in Southern Europe.

Still, despite its more than respectable growth, Turkey hasn't been entirely unscathed by the euro crisis. At the beginning of 2012, the Turkish economy grew by only 3.2 percent -- a relatively modest figure for an emerging economy. Growth had been hampered by the crisis consuming the EU, Turkey's most important trading partner by far. More than one-third of all Turkish exports go to the EU. And around 80 percent of all the foreign direct investment made in Turkey comes from the EU.

This has all contributed to an oddly ambivalent attitude towards the euro crisis in Turkey. Seemingly boundless pleasure over the country's own strength compared to a weakened Europe is mixed with the knowledge that Turkey is ultimately also economically reliant on the EU.

Within the ranks of Turkey's economic elite, there are few illusions about any sort of independence. Ali Bilaloglu, the CEO of the Dogus Otomotiv, a major automobile importer, describes himself as a "dyed-in-the-wool European." Doing trade with Europe is part of his daily agenda, too. Bilaloglu's some 2,000 employees import car brands like Volkswagen, Audi and Porsche to Turkey.

The company has been indirectly touched by the crisis. Turnover of Turkish products in the EU is falling and that, in turn, is weakening the Turks' purchasing power. "We don't have negative figures, but there is less growth," Bilaloglu says. "If Europe were healthier, then Turkey could grow faster."

But Dogus Otomotiv has also directly felt the pressures of the crisis through a joint venture it created with two other companies. The firms were conceived in 2006 to export Turkish-made trailers and dump trucks to the EU. Nothing ever came of the plan. "The European market collapsed and we had to find alternatives," he says.

Ultimately, executives at Dogus Otomotiv, like many other Turkish firms, sought new markets in Africa and the Middle East instead. But political scientist Aktar notes that "these regions have neither the importance nor the purchasing power of the EU market. They are unstable and unpredictable." He warns that Turks cannot lose sight of Europe economically, but should also stay connected for political and social reasons.

Turkey isn't dependent on Europe for economic reasons alone. Many people fear that the country's social and political reforms will only progress if the prospect of EU membership remains in place.

Derya, a 42-year-old elementary school teacher who asked for her last name not be published, says she fully supports EU accession for Turkey. "In Turkey, much still remains to be done when it comes to issues of human rights, standards of living and education," she says. "We can only achieve these reforms with the EU."

In fact, Erdogan's conservative-religious Justice and Development Party (AKP) has used the EU accession process to transform Turkey into a more democratic and just country. But more recently, and particularly after the AKP's recent landslide re-election in June 2011, the desire for reforms has stalled. And even as Prime Minister Erdogan likes to position his country in the Arab world as a role model for Muslim democracy, thousands of Kurds, students and more than 100 journalists are sitting in jail in Turkey based on what are sometimes absurd charges. It's a development political scientist Aktar views with concern. "There's a real tendency among Turkish politicians toward excessive self-confidence," he says. "That's very dangerous."

It is also clear to Aktar as well as entrepreneur Bilaloglu that EU accession shouldn't be an issue that is dependent on everyday politics. "That is a long-term, strategic direction," says Bilaloglu. "Turkey made a clear decision that it wanted to belong to the EU decades ago." The EU would also profit from Turkish membership, he says. It could, for example, help solve the issue of Europe's ageing and shrinking population. He also adds, nevertheless, that the EU needs to move ahead and finally make a decision over whether it is going to accept Turkey. "Because if the EU's problems get more urgent, then Turkey, as a partner that can help solve Europe's problems, may start to make a fuss."

For now, it seems, Europeans are going to have to start getting used to this new Turkish self-confidence.