During his stay in Europe, everybody seemed eager to be President Barack Obama's friend. Italian Prime Minister Silvio Berlusconi threw his arm around the US leader. French President Nicolas Sarkozy seemed to be on Obama's heels wherever he went during the G-20 meeting in London, the NATO summit in Strasbourg and the EU get-together in Prague. Even Russian President Dmitry Medvedev seemed to be enjoying his proximity to the American superstar.

Now that Obama is in Turkey, however, some political camps -- particularly in Germany -- have discovered the political efficacy of Obama bashing. While in Ankara, Obama reiterated his support for Turkish membership in the European Union, a position he first voiced on Sunday in Prague. That doesn't sit well with some.

"Turkey is bound to Europe by more than bridges over the Bosporus," Obama told the Turkish parliament on Monday. "Centuries of shared history, culture and commerce bring you together. And Turkish membership would broaden and strengthen Europe's foundation once more."

It is a sentiment not universally shared in Europe. On Monday, a number of politicians, particularly in Germany, went on the offensive. "It is a meddling in the internal affairs of Europe," Bernd Posselt, a member of the European Parliament from Bavarian's conservative Christian Social Union (CSU), blustered in an interview with SPIEGEL ONLINE. "The EU is not Obama's plaything. ... He should accept Turkey as America's 51st state instead," he continued.

Markus Ferber, the CSU's lead candidate in European Parliament elections set for early June, echoed his party colleague. "There is no question that the US has a voice in NATO. But when it comes to membership in its own club, the EU decides by itself," he said. "We don't need any tutoring from abroad."

Party head Horst Seehofer said that Europe's "internal harmony" is dependent on "common cultural and spiritual roots." He went on to say that "Turkey, as self-proclaimed representative of the Muslim world, clearly doesn't fit in."

The reason for the intensity of the reaction from Bavaria is not difficult to pinpoint. The CSU has had a rough year and Seehofer, who only took over the party's reins last October, needs an electoral success ahead of general elections this autumn. June European elections seem the perfect opportunity, but currently, there is a real danger that his party could fail to clear the 5 percent hurdle necessary for representation in the European Parliament -- a debacle to be avoided at all costs. Obama's demand merely provides a convenient opportunity to produce headlines. 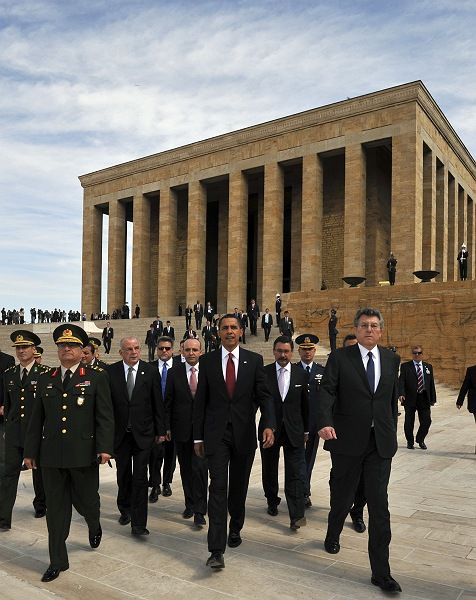 Obama leaves a wreath-laying ceremony as he is flanked by officials at the mausoleum of Mustafa Kemal Atatürk, founder of modern Turkey, in Ankara.

But the vexation at Obama's support for Turkish membership is real, particularly following Turkey's truculence at the NATO summit in Strasbourg. There, Ankara almost torpedoed attempts to name Danish Prime Minister Anders Fogh Rasmussen as the next secretary general of the alliance because of the Muhammad caricatures published in a Danish newspaper in 2005. Turkey could only be budged from its position following concessions offered by Obama and European leaders during last-minute telephone diplomacy.

Indeed, Sarkozy was quick to reject Obama's support for Turkish EU membership. Speaking after the US president said in Prague on Sunday that membership for Turkey would "ensure we continue to anchor Turkey firmly in Europe," Sarkozy said: "I have been working hand in hand with President Obama, but when it comes to the European Union it is up to member states  to decide."

German Chancellor Angela Merkel, whose own conservative Christian Democratic Union is likewise skeptical of Turkish membership -- preferring a "privileged partnership" for the country -- spoke of "differing opinions" when it came to Turkey's EU ambitions.

The Wall Street Journal quoted an unnamed diplomat familiar with the NATO back-and-forth as saying "more and more EU countries have doubts about Turkish accession. The mood at the table was grumpy."

Adding to the concern were media reports indicating that, in return for Turkey's support for Rasmussen, Ankara was promised that two sections of EU accession negotiations that had previously been frozen would be reopened. European Commissioner for Enlargement Olli Rehn has denied the reports, telling the Financial Times Deutschland that there is "no connection" between the NATO summit and Turkey EU accession talks.

Still, the CSU isn't buying it. "Rehn is a fanatic supporter of Turkish EU accession," Posselt told SPIEGEL ONLINE. "We as a parliament have to look into whether unfair business was made at the NATO summit."

The US has long been a supporter of Turkish membership in the EU. Obama's predecessor George W. Bush likewise encouraged the accession of the predominantly Muslim country.