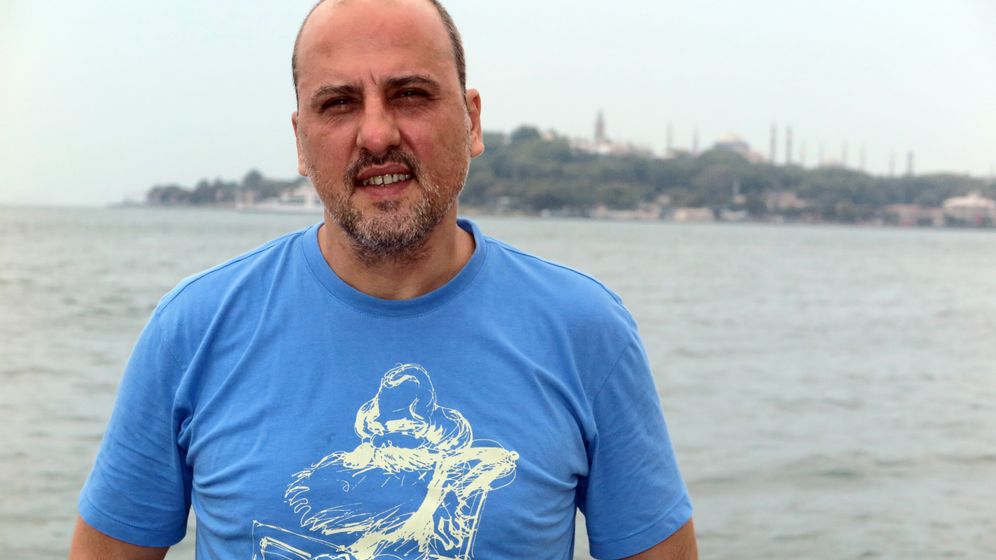 They arrived early in the morning from across the country and have spent hours waiting in the cold, and now they are running out of patience. The demonstrators, many journalists among them, pushed against the barricades set up in front of Istanbul's Caglayan Justice Palace and chanted "we want justice!" and "journalism is not a crime!"

On Wednesday two weeks ago, one of several terrorism trials against the journalist Ahmet Sik began. The government under President Recep Tayyip Erdogan had promised that observers would be allowed to observe the proceedings. Now, though, those outside are being told that the courtroom is too small. "The government wants to keep the public out," says Erol Önderoglu, a representative of Reporters without Borders and a friend of Sik's. "They are ashamed of themselves for this trial."

Ahmet Sik, 46, is considered one of the best investigative journalists in the country and has been awarded the UNESCO Press Freedom Prize for his work. In 2011, Sik uncovered the practices of the Islamist cleric Fethullah Gülen; in his book "The Imam's Army," he described how Gülen followers, with the help of Erdogan, who was prime minister at the time, infiltrated state institutions, enriched themselves and persecuted their opponents. The manuscript was confiscated by the police and Sik was locked away in prison for 12 months as an alleged terrorist. Now, six years later, Sik is once again behind bars. This time, though, he stands accused of disseminating propaganda on behalf of Gülen. And his case has become a prime example of the capriciousness with which the Turkish government is now treating journalists.

The repression is now even being visited upon critics from abroad. The Turkey correspondent for the German daily Die Welt, Deniz Yücel, 43, has been in police custody in Istanbul since Feb. 14. The authorities initially accused him of membership in a terrorist organization, disseminating terror propaganda and the misuse of data. Now, he is in pre-trial detention, but the first charge has been dropped. Yücel's offense was writing about emails that the hacker group RedHack had pilfered from the email account of Energy Minister Berat Albayrak, Erdogan's son-in-law. That's it.

Ahmet Sik was lying in bed when the authorities arrived at his Istanbul apartment at 7:30 a.m. on Dec. 29, 2016 and took him to the police station. For 24 hours, Sik was prohibited from calling either his wife or his lawyers and was interrogated by prosecutors about tweets he had written that were critical of the government and about articles of his, some of which were two years old. In a later statement, Sik said: "The focus of the investigation is my professional activities. In other words: journalism."

A Fight for Democracy

One-and-a-half months after her husband's arrest, Yonca Verdioglu is walking across Istiklal Caddesi, a shopping street in central Istanbul, wearing a winter coat, jeans and trainers. Verdioglu is a project leader for the Istanbul branch of the Heinrich Boll Stiftung, a political foundation associated with Germany's Green Party. Her voice is hoarse and her eyes tired. The fight she is leading on behalf of her husband is also a fight for democracy in Turkey.

Sik and Verdioglu got to know each other in Istanbul in the 1990s. Sik was working for the liberal daily Yeni Yüzyil at the time, while Verdioglu was assisting at a human rights foundation. Both saw themselves as secular leftists and were unhappy with the political situation of the time. Turkey was governed by a secular, center-right coalition, but true power lay with the military and the security apparatus. The jails were full of human rights activists, journalists and academics.

On Jan. 8, 1996, a friend of Sik's, the journalist Metin Göktepe, was tortured to death by security personnel following a demonstration. The police claimed that Göktepe had taken a fall, but Sik and his colleagues didn't believe the story and began searching for the truth. In the ensuing trial, police officers admitted to having beaten Göktepe with batons and kicking him.

Elif Ilgaz, who worked with Sik on the Göktepe campaign in the '90s, says that Jan. 8 was a wake-up call for the public. Afterwards, Sik and Ilgaz joined together with other journalists to create a kind of union for independent journalism, which then fought for democratic rights. Some of those rights also benefited religious politicians, who used them to wrest power away from the generals. One particular beneficiary was the man who would later go on to arrest Sik on two different occasions: Recep Tayyip Erdogan.

Together with several friends - writers, journalists and artists - Yonca Verdioglu is trying to get Sik released from prison. They have made a video showing scenes from Sik's career. "Ahmet has never allowed himself to be corrupted, neither with power or money," says Can Atalay, one of the founders of the Gezi protests. Sik became known in the late '90s as a journalist who was unafraid of the taboos in Turkish society by reporting on the oppression of the Kurds and on torture in Turkish prisons.

But it was his book on the Gülen movement in 2011 that brought him the most attention. In the volume, Sik traced how Fethullah Gülen, who had been living in U.S. exile since 1999, was able to create the most powerful Islamist group in Turkey. Gülen, he wrote, had installed followers in key business, media and administration positons, where they pursued the sect's interests to the detriment of the public. Erdogan, Sik wrote, made a deal with the cleric following his election victory in 2002, promising to promote the Gülen movement in return for its support in his conflict with the secular establishment.

Together, Erdogan and Gülen managed to break the military's grip on power, but Erdogan failed to subsequently democratize state institutions. Sik revealed how Gülen followers in the police and judiciary used phony evidence to persecute hundreds of opposition members as alleged members of the ultranationalist terror organization Ergenekon.

In 2011, the journalist was arrested and brought to the high-security prison in Silivri on the outskirts of Istanbul. According to the state prosecutor, Sik himself was a member of Ergenekon. Nedim Sener, a journalist who shared a cell with Sik for a year, says that Sik kept his spirits up despite the difficult conditions he encountered in prison, despite isolation and despite harassment from the guards. "He was convinced that the truth cannot be suppressed forever," Sener says. In many Turkish media outlets, both Sener and Sik were denigrated as "terrorists" and "traitors."

The narrative only changed when Erdogan and Gülen had a bitter falling out in 2013. Suddenly, the public learned of the illegal methods employed by the Gülen sect and President Erdogan has since been portraying himself as a victim of the movement. Gülen, Erdogan insists, was the driving force behind thefailed military uprising on July 15, 2016.

Most Turkish media outlets went along with Erdogan's shift. Journalists who had just a few years previously venerated Gülen as a cleric now condemned him as a terrorist leader. For Sik, however, that was too simplistic. After his release from prison, he issued a steady stream of reminders that it was the Erdogan government that had promoted and covered up the Gülen sect. "Fethullah Gülen and Recep Tayyip Erdogan should appear together in court for creating and leading an organization," he wrote.

'Takes My Breath Away'

The headquarters of Sik's employer, the daily newspaper Cumhuriyet, looks not unlike a fortress these days. Security personnel patrol the entrance. Tora Pekin, one of the paper's lawyers, is sitting in a stuffy, top-floor office shaking his head. "I have been following numerous unfair trials in recent months, but the Sik case takes my breath away," he says.

Sik's book is now being used as evidence in trials against the Gülen movement. But the government has nevertheless accused him of being a Gülen supporter. At the same time, the trial against Sik for the 2011 allegations that he was a member of Ergenekon is continuing. Despite the fact that all the police officers who arrested him back then are now in jail for being alleged Gülen supporters, Sik is being forced to appear in the Caglayan Justice Palace to face the court. "In the case of Sik, the government isn't even trying to preserve the impression of due process," says Pekin.

Since July 2016, 170 media outlets have been closed down and 162 journalists have been arrested. The Cumhuriyet, one of the country's last remaining independent newspapers, has been hit particularly hard by the reprisals. The paper's editor-in-chief and 11 of its journalists are behind bars, some of them for over 100 days. Cumhuriyet lawyer Pekin now finds himself visiting the high-security wing at Silivri every other day for meetings with clients. "The equation is simple," he says. "Either you support Erdogan. Or you are a terrorist."

On a Thursday in February, Sik's wife drove to Silivri for the hourlong visit with her husband that she is allotted each week. She says that her visits always feel like déjà-vu, like a nightmare from the past. There was a crowd of people at the prison entrance, a function of the facility having been expanded significantly from the two buildings it included back in 2011. The government is having difficulties finding enough space for all its prisoners. Last summer, the Justice Ministry released 38,000 convicts to make room for alleged putsch supporters.

Sik is locked away in high-security wing 9. He isn't allowed to read any books aside from those in the prison library and he isn't allowed to see any other prisoners or to receive visitors beyond his immediate family and his lawyer. When Verdioglu and Sik speak during her weekly visits, they are separated by a pane of glass. Verdioglu uses the visits to update her husband on their daughter, relatives and friends.

Neither Sik nor his wife know when he might ultimately be released. In April, Turkey is voting on the introduction of a presidential executive system that would concentrate power in Erdogan's hands. But despite the looming vote, Sik's wife repeats the works that her husband recited into the cameras in 2012: "From all this oppression and tyranny, a new life will arise which those in power fear but which we dream of and for which we shall continue our struggle." 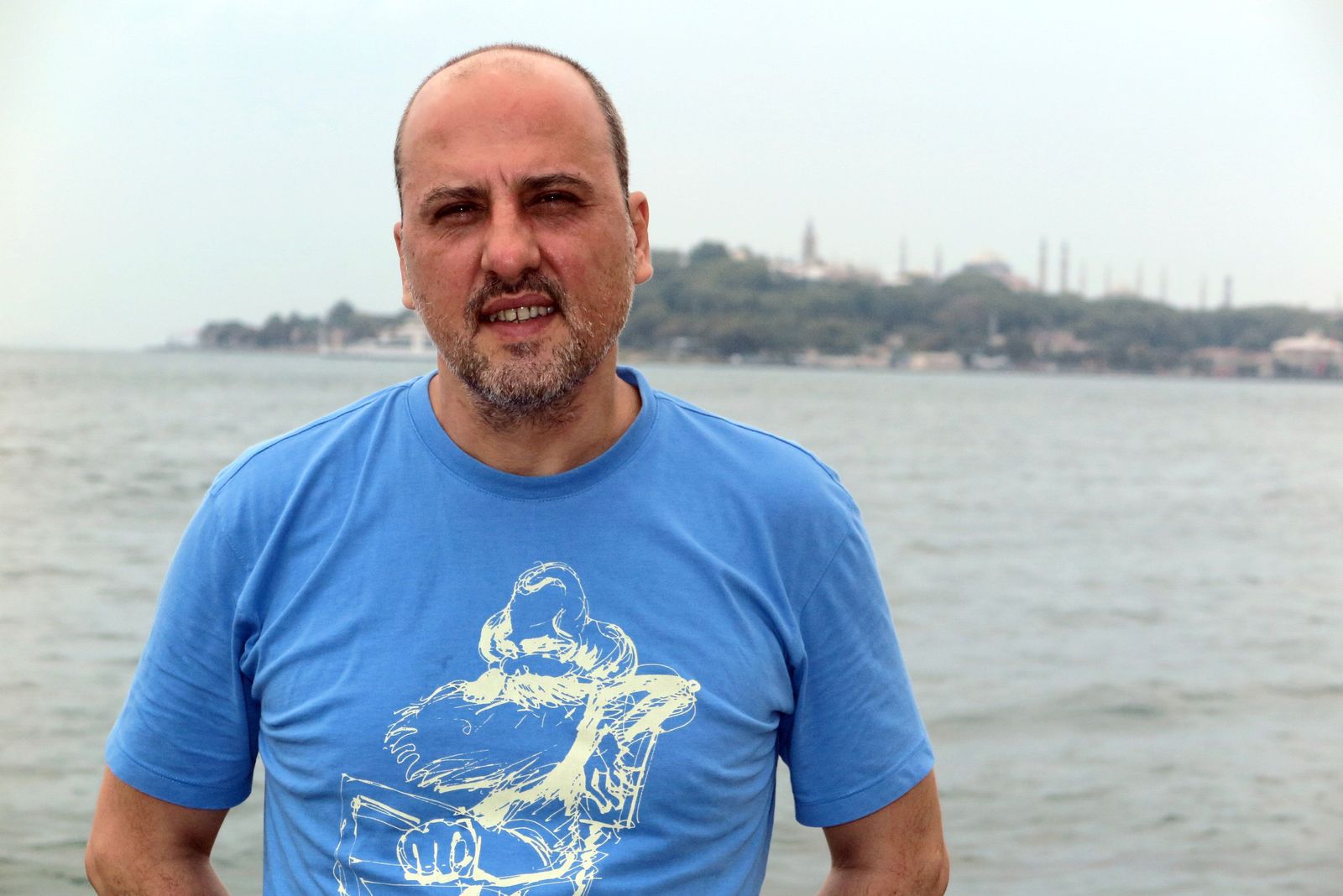 Ahmet Sik, an investigative journalist in Turkey, was arrested in Turkey for his critical coverage of the Gülen sect in 2011. Now, he is in jail again, this time accused of being a member of Gülen. His trial is indicative of the capriciousness of the Turkish judiciary under President Recep Tayyip Erdogan. 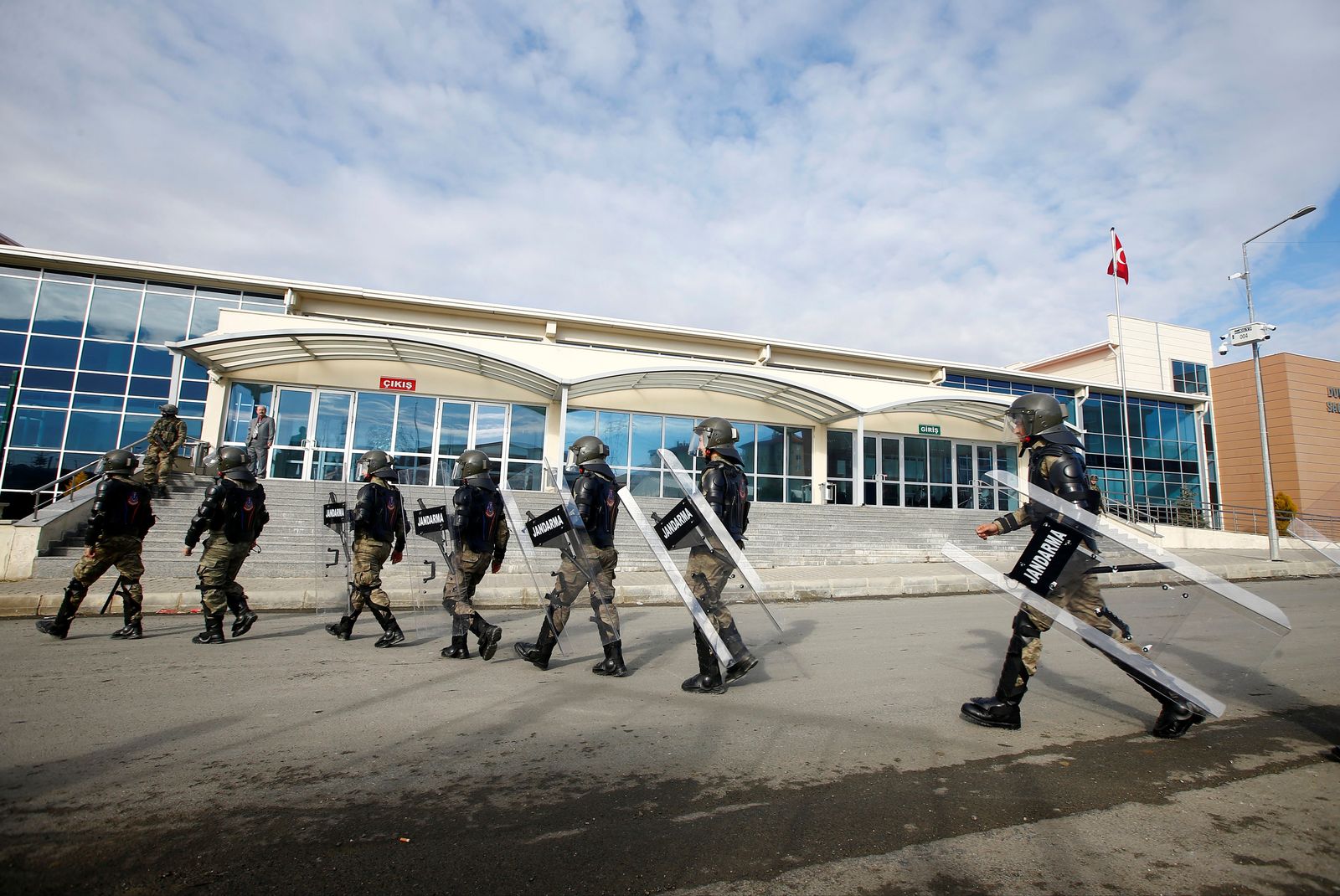 Sik is being held in a high-security wing of Silivri Prison, on the outskirts of Istanbul. His wife is allowed to visit once a week and he is able to talk to his lawyer. But otherwise he is largely isolated. 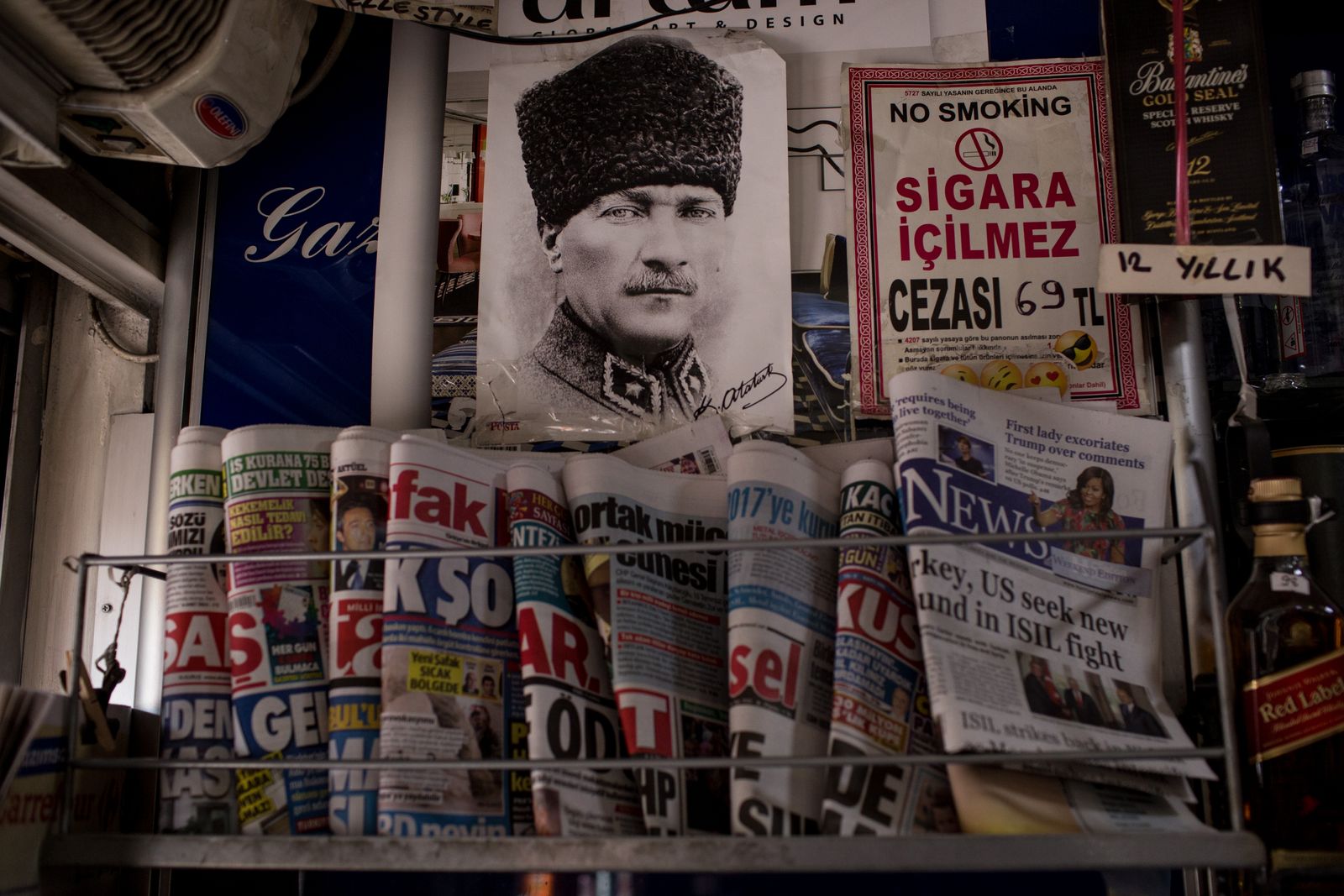 A portrait of Mustafa Kemal Atatürk at a newspaper stand in Istanbul. Since last summer's attempted coup, Erdogan has cracked down on the media and the opposition.