Murat Karasu still has a very clear memory of the day that he rejected an order for the first time. The Turkish army officer had studied in the United States and flew fighter jets. His superior had already assigned him several times to highly desired NATO posts -- most recently in Germany. Following orders and obedience had been as important to Karasu as his love of his country.

After parts of the military conducted a coup attempt against Turkish President Recep Tayyip Erdogan in July, Karasu continued serving in the military until, at the beginning of September, his superior suddenly placed a letter in his hand. The order stated that Karasu must leave the military and return to Turkey.

"My termination came out of the blue," Karasu, a purposeful man in his mid-40s, says four months later. "No reason was given." Karasu is sitting in a pastry shop in a small town in western Germany. "I want to stay in Germany," he says. The former officer, who had, until recently, been responsible for the surveillance and defense of NATO air space along the border to Russia, has applied for political asylum in Germany.

Karasu, his wife and their children are victims of Erdogan's purges, as are around 40 other mostly high-ranking Turkish NATO soldiers in Germany. For months now, they've been living more or less inconspicuously near NATO facilities in places like the town of Geilenkirchen in North Rhine-Westphalia, in Uedem or the area near the U.S. air base in Ramstein in Rhineland-Palatinate. In interviews with DER SPIEGEL and German public broadcaster ARD, they are now going public with their stories for the first time. They want to make clear that they had nothing to do with the coup attempt and yet they are still unable to return to their home country. "This is about our reputations," says Karasu. He wants to defend his honor.

The conditions set for the interviews were the product of lengthy negotiations. Karasu and his colleagues did not want their real names to be used and they also requested that their faces not be shown in photos or videos. The meetings took place in cafes and in a broadcasting facility. The soldiers fear reprisals by Erdogan supporters, and not without reason. Turkish television stations have been inciting against the soldiers, who they have described as "terrorists" and "traitors to the motherland." The fact that Germany is home to 3 million people of Turkish descent is another factor.

The cases are also highly sensitive for Germany in diplomatic terms. When NATO soldiers apply for political asylum in another NATO member country, it becomes an issue that is not be decided by the usual immigrant and asylum authorities alone.

There is very little doubt that the soldiers cannot expect fair trials back in Turkey. Indeed, two soldiers were recently sentenced to life in prison for their alleged participation in the putsch attempt. But the last thing German Chancellor Merkel needs right now is renewed tensions with Turkey. Merkel doesn't want to jeopardize the European Union's fragile refugee deal with Ankara, which has halted the mass influx to Europe from Syria. The tensions that broke out over a resolution passed almost unanimously by the German parliament in June recognizing the murder of up to 1.5 million Armenians at the hands of the Turks as genocide already demonstrated just how thin-skinned Erdogan can be to criticism.

German Interior Minister Thomas de Maizìere of Merkel's conservative Christian Democratic Union (CDU) is aware of the efforts by the Turkish officers to obtain asylum in Germany, but he has recused himself from the matter. Merkel is currently on a trip to Turkey and it is possible the topic will be broached during her Feb. 2 visit.

Karasu had been at home with his family when, on the night of July 15, he received an SMS from Turkey. "Have you seen what is happening?" Karasu thought to himself that it might be another terrorist attack, a bomb. But when he turned his television on, he could see how Turkish tanks were rolling toward people. "I didn't think something like that was possible," he said. "I was afraid." Karasu tried to get information out of Turkey, flipping through the Turkish television channels until he got in touch with his superior at the NATO base. Then he slept for a bit. "Whoever was responsible for this coup should be punished," Karasu says. He also wants to prove his own innocence. He has submitted a petition to a Turkish military court. "I will fight until the very end, even at the European Court of Human Rights if I have to."

'They've Branded Me a Traitor'

Karasu's mobile phone rings. His daughter isn't feeling well and he finds someone to pick her up at school. Karasu is trying to ensure that things remain as normal as possible for his children, that they have friends and go to school, but normalcy isn't something he will be able to enjoy himself. Karasu has exchanged his uniform for a black suit, but many other aspects of his life have also been upended since the coup attempt. "I was expecting that I would be promoted to the level of general in the next few years," he says. "Now they've branded me a traitor."

Karasu is puzzled over why he and his colleagues became the subjects of the purge actions. He says he's now certain that his career in the West led to his becoming a target. "The soldiers who have been effected by the purges have one thing in common," he says. "We are successful, oriented toward the West and stand for a secular state."

In Turkey, politicians and the media alike are openly trying to stir public sentiment against NATO and the Turkish officers. Karasu believes that Erdogan and his supporters are seeking to prepare the public for Turkey's eventual withdrawal from the military alliance. In a report that is now being reviewed by the state office of criminal investigation in Rhineland-Palatinate, a Turkish reporter with the TV magazine show "Yaz Boz" described the NATO base in Ramstein as a safe harbor for "terrorists." He also claimed, without providing any evidence, that "they managed the coup attempt from here that night." The camera then cut to a string of duplexes in the neighboring village of Mackenbach, which the Turkish television station depicted as the epicenter of the insurgency against Erdogan. The reporter claimed that the putschists "continue to live here in luxurious villas."

Karasu says he considers broadcasts like that to be tantamount to appeals for lynch justice. He still has his diplomatic passport, but it no longer provides him with any protection. Instead he pulls out the thin piece of paper that is the only thing preventing his extradition to Turkey -- the document confirming that his asylum application is currently being reviewed in Germany. "If I go back to Turkey, I risk arrest and possibly torture," he says. The apartment of his parents, who are in their seventies, has already been searched by police hoping to find Karasu.

But as clear as their case appears to be, the officers have been waiting in vain for decisions on their asylum requests. "This will get decided at a high level," says one official at the Federal Office for Migration and Refugees (BAMF). Officials at the Interior Ministry and BAMF say that the NATO officers aren't being given special treatment with their asylum applications. But in smaller circles, top officials admit that the issue has been temporarily placed on the backburner in the hope that the situation in Turkey will quiet down and that the matter will resolve itself.

At the moment, however, it appears that a return to law and order will not happen any time soon in Turkey, and pressure to make a decision on the asylum applications is mounting. "Germany cannot be allowed to become Erdogan's henchman in the fight against his critics," says Sevin Dagdelen, a member of parliament with the Left Party who is the daughter of Turkish immigrants. "There is no doubt that we cannot send these soldiers back to Turkey," says Stephen Mayer, a domestic policy expert with the conservative Christian Social Union. "They will land in jail there." Norbert Röttgen, who chairs the Foreign Affairs Committee in parliament as a member of Merkel's conservative CDU, also considers diplomatic concerns on the issue to be misguided. "Asylum procedures are purely legal in nature and political considerations are not and will not play a role."

The uncertainty is also taking its toll on the officers. They haven't been receiving their military salaries since September and are forced to live off their savings. Neighbors have sought to be helpful. After learning that Karasu had been fired by the military, his neighbors dropped by with a loaf of bread. "They thought we could no longer afford to buy food," says Karasu. His wife cried -- the present had been brought over with the best of intentions, but it still symbolized the fall they had just experienced. "We are devastated," says Karasu. "Believe me, I have no sympathy for the putschists."

Update: Following the original publication of this story in German on Friday, Turkish Defense Minister Fikri Isik requested that the German government hand over the soldiers in question. 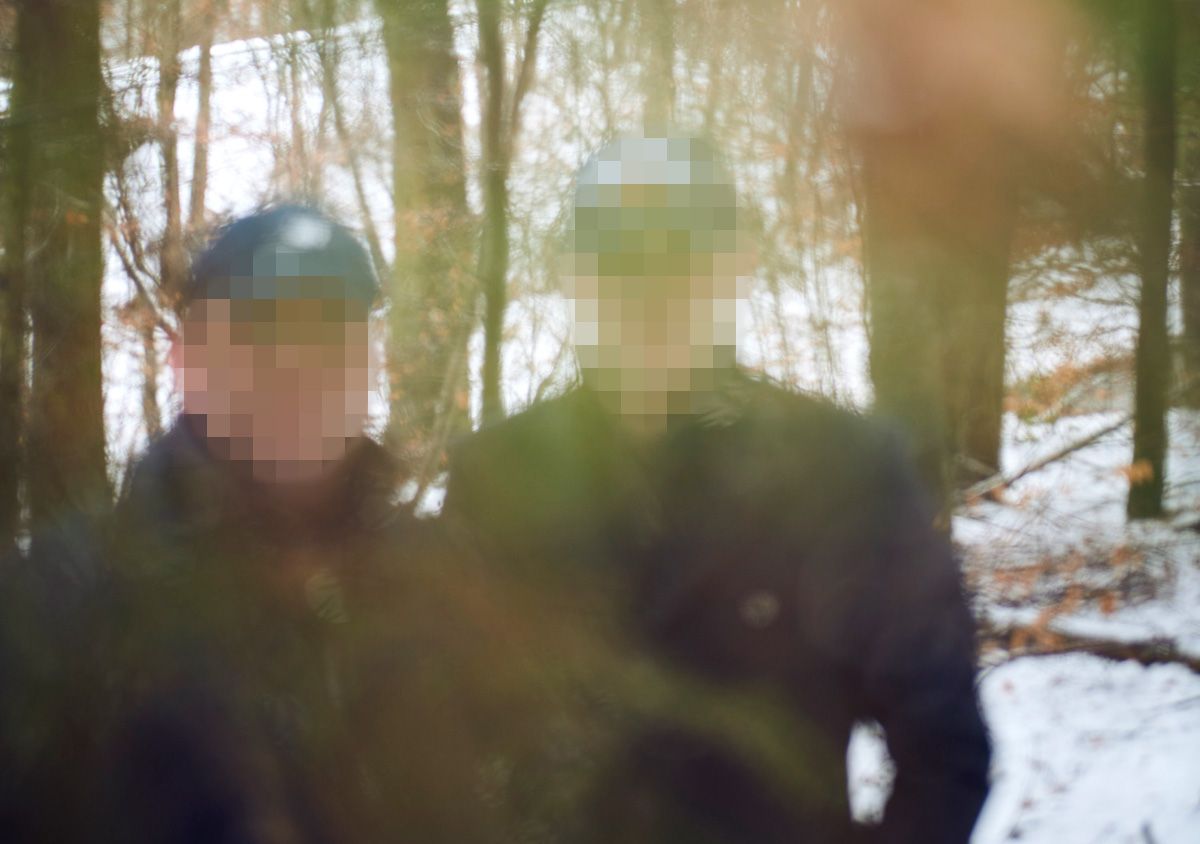