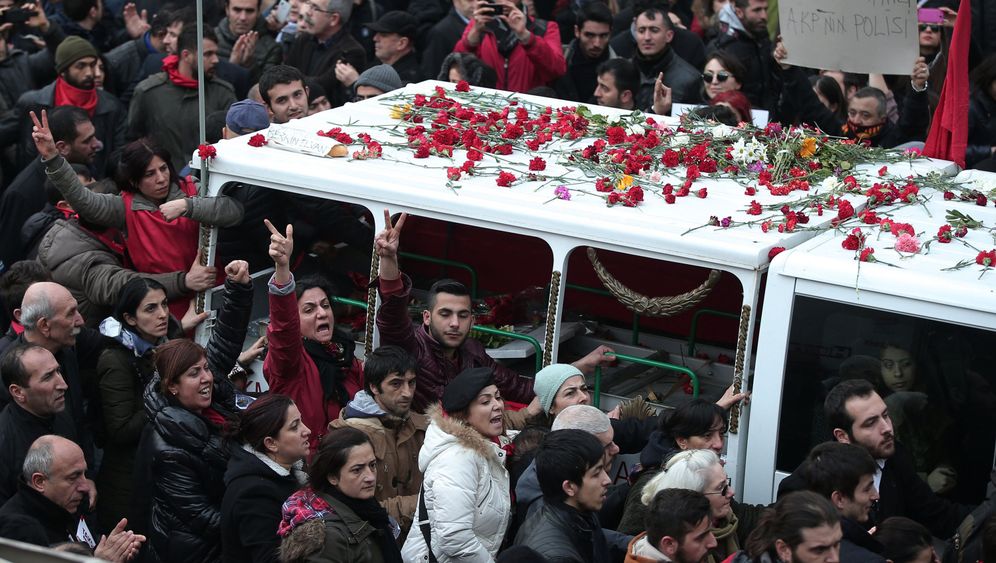 It took a while before the surveillance cameras in Mehmet Baransu's office became apparent. But the audio bugs remained elusive. Perhaps they are hidden behind the electrical outlets, or above the windows that offer a view of the Bosporus. They are definitely there, Baransu believes. He is, after all, the most hated journalist in Turkey at the moment.

"I installed the cameras myself. They are my only protection," he says. "A few weeks ago, they documented two men trying to load incriminating documents onto my computer." He recognized the pair immediately: They were the bodyguards made available by the state for his protection. Baransu recounts how they also tried to deposit papers in his home, snooped around in his private life and uploaded films about him to YouTube. He complained to the Istanbul governor and asked for replacement bodyguards. But they never came.

Until recently, Baransu had long been a favorite of Prime Minister Recep Tayyip Erdogan's government. The 37-year-old investigative reporter, who writes for the small daily Taraf, was instrumental in uncovering an alleged military conspiracy targeting the government in 2010. Hundreds of officers were convicted and the Kemalist elite disempowered as a result.

But today, Erdogan's party, the AKP, scorns him. Baransu is currently reporting on corruption accusations that have been levelled against Erdogan and members of his cabinet. The prime minister has even mentioned the journalist at campaign events, calling Baransu a traitor as he spits his name out. State prosecutors are currently investigating him for "high treason" and the "disclosure of state secrets."

Important local elections, set for March 30, are less than two weeks away, and Turkey is anything but tranquil. When 15-year-old Berkin Elvan died last Tuesday, hundreds of thousands of people took to the streets across the country. It wasn't a redux of the mass protests from last year, but it reflected society's significant amount of pent-up anger.

A Symbol of Resistance

Elvan was hit in the head by a teargas cartridge last June; his parents say he was just going out to buy bread. The teenager was in a coma for nine months before his organs failed. He wasn't just the eighth person to die as a result of the so-called Gezi protests of last year; he is also a symbol of the resistance against Erdogan's government.

Two more people died in the street battles that erupted following Elvan's funeral last week: a policeman who suffered a heart attack in a cloud of tear gas and a young man. Erdogan callously referred to the demonstrators as nut cases and even called Elvan a terrorist during his election campaign. An investigation has never been made into why police fired a tear gas canister at him and Erdogan's former minister for EU affairs, Egemen Bagis, referred to mourners as "necrophiliacs."

The mood is tense because much is at stake for Erdogan in the coming vote. The AKP is currently ahead in the polls, but after 12 years at the helm the prime minister's power is on the wane. Not only has his credibility been damaged by the corruption scandal, but his battle with the religious Gülen movement has divided his own camp. Furthermore Turkey's weakening economy could cost him supporters. A close victory or the loss of Istanbul or Ankara could very well mark the beginning of the end for Erdogan, with AKP infighting one possible result, or even a party split.

The current situation is one of the most difficult Erdogan has encountered in his political career. His goal of remaining president until the country celebrates the 100th anniversary of the republic in 2023 looks more illusory than ever. Still, he is doing what he can to demonstrate his power: He is threatening to block YouTube and Facebook because they are used for "all kinds of immorality, all kinds of espionage and spying;" he wants to give more power to Turkey's secret service and introduce heavy penalties for journalists who publish classified documents; and he has been vehemently criticizing his opponents, critics from abroad, "conspirators," the "lobbies" and the "dark powers" that are trying to prevent Turkey's ascent.

The latter is a reference to the network of the Muslim preacher Fehullah Gülen, a former AKP ally in the struggle against the Kemalists but now a bitter rival. Without the Gülen supporters in the judiciary and police, Erdogan would never have been able to break the power of the Turkish military. But ultimately, they became too powerful for Erdogan's taste. He instructed the secret service agency MIT to monitor members of the Gülen movement and as early as 2004 began discussing potential measures against the group in the National Security Council.

All of that is now public knowledge thanks to Mehmet Baransu. "The prime minister has declared war on the Gülen movement," the journalist says. "But the war isn't going well for Erdogan at the moment."

He points to corruption investigations currently being led by state prosecutors who are close to the Gülen movement -- investigations which led to the arrest of several sons of cabinet members and AKP businesspeople last December. But intercepted telephone calls between Erdogan, his son Bilal, ministers and close confidantes -- sound files which have been appearing on the Internet in recent weeks -- have also damaged the prime minister. The phone call recordings are intended to prove that he is corrupt and that he tries to influence both the judiciary and the media. Erdogan himself has confirmed that some of the recordings are authentic.

"But I can't say who leaked the recordings," Baransu says. "They are definitely real. Everybody knows that the government is extremely corrupt."

Five groups play a role in the current crisis: The Gülen movement, which has turned its back on the AKP and now supports opposition parties; the Kemalists, some of whom have just been released from prison and are quietly out for revenge; the Kurds, who feel cheated by Erdogan's government; and the young Gezi demonstrators, who want a Turkey free of turbo-capitalism, machismo and Islamism. And then there is the largest block, the one made up of AKP supporters, a coalition of the religious, nationalists and economic liberals. The party's grassroots live in rural areas and in emerging industrial cities. Cities like Bursa.

Located roughly three hours south of Istanbul by car, Bursa provides clues as to why many AKP supporters are apparently unconcerned by the scandals currently buffeting the government. Traditionally, the city is not a conservative one and its population is mixed. But since Erdogan has been in power, the AKP has always won big in Bursa.

That is primarily a result of economic growth. More than 100,000 jobs have been created in the city since 2002, Mayor Recep Altepe gushes. In addition, the city's unemployment rate of 5.2 percent is far below the national average of 9.1 percent, despite the fact that tens of thousands of people move to Bursa every year. "In the last 15 year, Bursa's population has more than doubled" to well over 2 million, Altepe says.

The AKP mayor is particularly proud of the streetcars that are built in his city and which will soon be exported. "We want to become a cosmopolitan city and a global industrial hub," he says. "Bursa is a Turkish success story."

The shopkeepers in the city's traditional market are not quite as enthusiastic. "It is true that Bursa is booming, but only a few are benefiting from the prosperity," one says. "If it is true that the prime minister is stuffing his pockets full, then I can't vote for him anymore," says another.

In Bursa too, several thousand people took to the streets last Wednesday to mourn the death of Berkin Elvan, but the march remained peaceful. In Bursa, tranquility is preferred -- at least as long as there is enough work.

But that might soon no longer be the case. "There is no economic miracle anymore. Future rates of growth will no longer be enough to create jobs for the youth," says Istanbul-based political scientist Cengiz Aktar. Even more problematic is the fact that most of the growth was the result of a construction boom in recent years. But as Spain has shown, a boom based on the construction sector alone is not enough to carry an entire economy in the long term, Aktar says, adding that private household debt has climbed in Turkey just as it did in Spain. Turkey has one of the lowest household savings rates in the world, at around 12 percent, and for years experts have been saying that Turkey's credit and real estate bubbles are at risk of bursting.

The AKP doesn't want to hear it. Instead, the prime minister talks unceasingly about his enormous construction projects and orders his people to consume even more. "More streets, more bridges, higher towers, more power plants," says Aktar. "That is Erdogan's only vision."