At the end of the news conference Angela Merkel narrowed her eyes and pursed her lips. Her face seemed to say: What's he talking about? Next to her, Turkish Prime Minister Recep Tayyip Erdogan was talking about Cyprus. It was a mistake, he said, to allow "South Cyprus" into the European Union, and he added that the chancellor shared that view.

It's a claim Erdogan has made before, most recently on Tuesday evening at the opening of the new Turkish Embassy in Berlin. That doesn't make it any truer, say officials close to Merkel. Some might say it's not especially diplomatic of him to repeat the statement in her presence. But perhaps the prime minister really believes it. Merkel is wise enough not to contradict him in public. She prefers to direct him to the side for the obligatory photo in front of the flags of their two nations. A handshake, smiles, and off they go.

The little incident shows that German-Turkish relations are rocky at the moment, and not just regarding Europe. They're finding it hard to conceal their differences on a range of other topics such as the Syrian conflict, in how to deal with the banned Kurdistan Workers' Party PKK, on the integration of the 3 million people of Turkish origin living in Germany. The two leaders stressed their close and friendly ties on Wednesday, but there was no evidence of great warmth between Merkel and Erdogan. They ticked off Erdogan's program of engagements politely, but without smiling much.

The dispute over Cyprus, divided since a Turkish invasion in 1974 triggered by a brief Greek-inspired coup, is only one of several obstacles to Turkey's accession to the EU. Turkey formally applied to join the the club in 1987 and negotiations began seven years ago, but there has been no progress since mid-2010. The EU's latest progress report on Turkey wasn't particularly flattering: It complained about breaches of freedom of speech and the right to free assembly, and said Turkey's democratic reforms had come to a standstill. Nevertheless, Merkel on Wednesday assured Erdogan that accession negotiations would be "honest."

Erdogan said he regretted the lack of progress. He made plain how honest he thought Europe was being with Turkey on Tuesday evening at a conference on Europe when he accused the EU of engaging in delaying tactics. Asked if Turkey would become a full member of the EU by 2023, he said: "They won't keep us waiting that long, will they?" If they did, he added, "then the EU will lose, at least it will lose Turkey."

It was meant as a warning to Europe's leaders. Turkey's eagerness to join the EU evaporated a long time ago. The Turkish economy is continuing to boom and Erdogan and his conservative-Islamic AKP party feels too strong and self-confident to wait for the Europeans. The country is refocusing and trying to boost its influence in the Muslim world. It's a twin strategy: Turkey wants to enhance its position as a regional power and signal to Europe how important it is to the West as a bridge to the Islamic, Arab world.

Against that backdrop, the Syria conflict represents a special challenge. Turkey has firmly positioned itself on the side of the rebels in the neighboring country and is demanding a tougher approach against the Assad regime by the international community. Addressing the situation in Syria, Merkel spoke of a "true burden" for Turkey, praised Ankara's level-headedness in view of the recent missile strikes against a Turkish village that originated from Syria and pledged further support for NATO partner Turkey. But Ankara is also asking for considerably more support than it has obtained up until now -- especially in light of the continuing flight of refugees from Syria into Turkey. According to the UN Refugee Agency, Turkey is currently providing aid to 101,834 Syrian refugees who have fled their homes and crossed the border into Turkey.

Ankara also wants greater assistance on the PKK issue. Shortly before he departed for Berlin, Erdogan complained that the German government is doing too little to assist in efforts to stop the terrorist activities of the organization, adding that PKK front organizations in Germany, which is home to the largest Turkish population outside Turkey, are able to raise money in the country to be directed at the armed conflict "without any trouble." It's a statement the government in Berlin strongly denied. Merkel said that Germany is "helpful in every area" in regard to terrorist activities by the PKK. But Erdogan also thanked Merkel for the support and avoided any harsh rhetoric -- an obvious attempt to ensure that good appearances were preserved in Berlin on Wednesday.

It was also fitting that Erdogan saw nothing of the around 2,500 people who were protesting against his policies about 500 meters away from the Chancellery in front of the Brandenburg Gate. A broad coalition of leftist groups, Kurds and Turkish religious minorities accused the prime minister of pushing the country in the direction of further Islamization and human rights violations. As the peaceful protest slowly dispersed early in the afternoon, Erdogan's motorcade was already headed towards the airport. 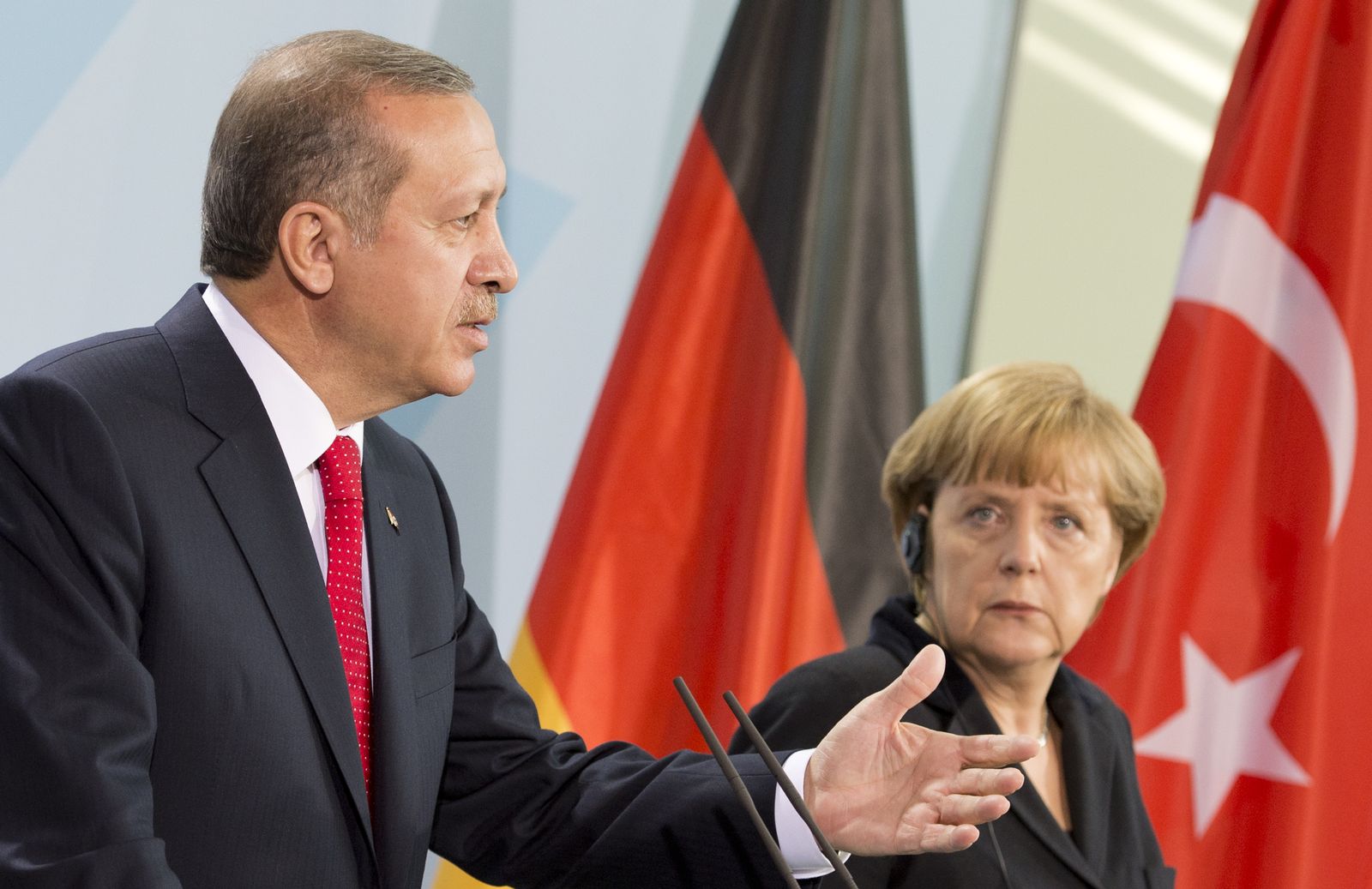