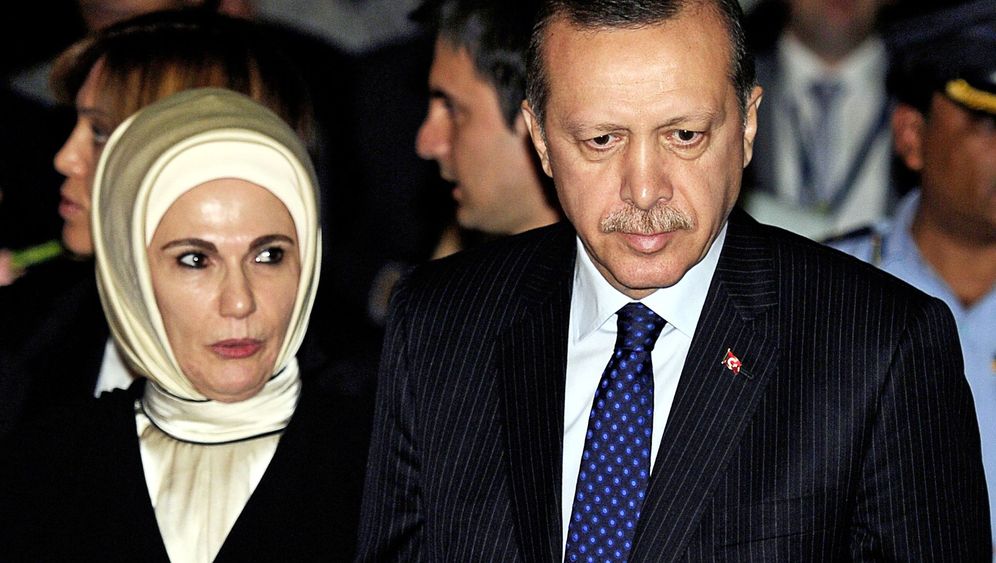 Six letters, each a few centimeters tall, written onto her naked skin -- that was Madonna's contribution to Turkey's culture wars. Anyone who saw the words "No fear" written on her back during her June 7 concert in Istanbul understood her message, which was to encourage the Turkish people to have no fear of the enemies of freedom, and of patriarchs, philistines and the morality police. The singer also exposed one of her breasts on stage, apparently as a gesture of solidarity.

For weeks, thousands of women have been protesting against the government of Prime Minister Recep Tayyip Erdogan, 58, after he announced his intention to crack down on abortions and Caesarean section births. Since then, a debate on the role of women in Turkey has erupted -- but not for the first time.

'I Don't Believe in Equality'

It's hard to say when exactly Erdogan threw away his opportunity to gain the support of the women's movement.

In 2010, he invited representatives of women's organizations to the Dolmabahce Palace in Istanbul and confessed: "I don't believe in equality between men and women."

A year later, on International Women's Day in 2011, Erdogan talked about violence against women and statistics stating that so-called honor killings had increased 14-fold in Turkey from 2002 to 2009. But that, said the premier, was only because more murders were being reported, and that there are basically few acts of violence against women.

A member of the audience says that she was "incredulous." Erdogan's speech was "simply misogynistic" and "intolerable window dressing," she says.

There is no doubt that the Turkish premier is a deeply conservative man. His view of women is traditional and his notions about family policy are patriarchal. The employment rate among women in Turkey is currently at 29 percent, the lowest among all 34 member countries of the Organization for Economic Cooperation and Development (OECD).

The Turks, who voted Erdogan into office for a third term last year, knew what they were letting themselves in for. Hadn't Erdogan, when he was mayor of Istanbul in 1994, told a female employee that women should never be allowed to enter the innermost circles of political leadership, because this was "against human nature?"

A politician who dismisses female self-determination as "feminist propaganda" is nothing special in Turkey, and enjoys support among broad segments of the voting public, not just among conservative Muslims. Nevertheless, Turkey is still the most modern country among majority Muslim nations. It's a country where GDP has increased by more than half, and per-capita income by more than a third, since Erdogan came into office. And it's a country that has become a motor for growth and a regional power -- and all of that since a supposedly reformed Islamist took power in March 2003.

At the time, many liberal Turks entered into a pact with Erdogan, because they had a common enemy: the fossilized establishment consisting of the military, the judiciary and the government bureaucracy. In return for their support, Erdogan promised to respect the liberals' lifestyle.

But now there are growing signs that the prime minister hasn't kept up his end of the bargain. "It isn't a matter of Erdogan wanting to transform Turkey into a theocracy," says Istanbul-based sociologist Binnaz Toprak. "It's about what the Americans call social engineering, the modification of social structures."

Take, for example, education. "We will raise a religious generation," the prime minister said in the spring, just as his government was approving a new education reform. It increases compulsory school attendance from eight to 12 years, but this only seems progressive at first glance. Under the reform, parents can move their children to vocational schools, a category which also includes the religious Imam Hatip schools, after only four years. In fact, the last four years of compulsory education can even be completed in the form of correspondence courses.

Erdogan's "religious generation" can already be pleased about a well-established infrastructure of faith today. His party, the AKP, has transformed the Presidency of Religious Affairs, the Diyanet, into a massive agency. Its €1.3 billion ($1.6 billion) budget is larger than the combined budgets of Turkey's European Union, foreign, energy and environment ministries combined. There is now one mosque for every 350 people in Turkey -- and one hospital for every 60,000.

Art is another example. At the end of April, Erdogan had another of his notorious outbursts, this time raging against the "despotic arrogance" of the intellectuals. "What gives you the right to express an opinion on everyone and everything? Do you have a monopoly on theater in this country? Is art your monopoly? Those days are gone."

Actors had demonstrated against an order to remove a play from a theater's season schedule that the authorities felt was "too vulgar." Erdogan then announced that all government-owned theaters were to be privatized.

The prime minister already had a score to settle with the actors. His daughter Sümeyye had tangled with an actor in April 2011, after the man had winked to her from the stage and imitated the way she chews gum. The young Erdogan stormed out of the theater and promptly complained to her father. The actor was later subpoenaed.

Erdogan's authoritarian treatment of artists has almost sultanesque overtones, so much so that one false word can spell an artist's demise.

"It's becoming increasingly difficult to think and live the way one wishes in Turkey," says the world-famous pianist Fazil Say. "Turkey is getting more and more religious," says author Nedim Gürsel. "This policy is leading the country toward totalitarianism," says sculptor Mehmet Aksoy, whose sculpture "The Statue of Humanity," dedicated to peace among Turks and Armenians, was torn down because the premier didn't like it.

The government is also settling a score with pianist Say. An avowed atheist, he had quoted a verse from a poem by the medieval Persian poet Omar Khayyam in a tweet: "You say wine will flow from its rivers. Is heaven a pub? You say two women per believer. Is heaven a brothel?"

The pianist was eventually prosecuted for "insulting religious values." It didn't surprise him, says Say. In fact, he adds, nothing surprises him any more in a country whose prime minister, Erdogan, once wanted to abolish the ballet.

And now the premier has discovered the abortion debate. This was unexpected, given that abortion has not been a subject of significant public discussion until now. A relatively liberal rule that permits abortions until the 10th week of pregnancy didn't offend anyone, not even Islamic scholars. The prime minister shouldn't behave as if he were the "guardian of the vagina," angry female protesters shouted.

What prompted Erdogan to take on abortion? Was it to deflect attention away from perhaps the biggest scandal of his term in office? In December, the Turkish Air Force killed 34 innocent civilians during an attack on presumed fighters with the PKK Kurdish separatist organization. Many media outlets pretended that the massacre, which took place near the town of Uludere, never happened.

When Erdogan's critics rebuked him for the air strike, the prime minister defended himself in his own way, saying: "You always talk about Uludere. Every abortion is like an Uludere." But many would argue that one aborted fetus can not be compared to 34 dead Kurds.