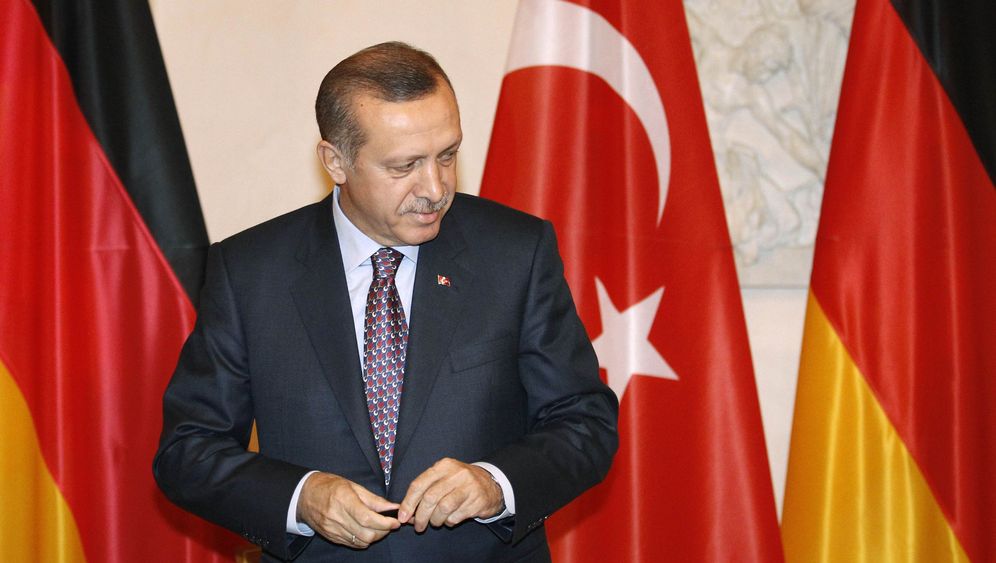 Photo Gallery: How Turkey is Booming Under Erdogan

When Angela Merkel and Recep Tayyip Erdogan meet today at the Foreign Ministry in Berlin, the pictures of two important world leaders should be nice, friendly ones; the German chancellor and the Turkish prime minister shaking hands as they cement the friendship between their two countries. The ceremony is being held to mark the 50th anniversary of the first 'guest workers' arriving in Germany from Turkey, and ahead of the prime minister's visit, Merkel praised the migrants, saying they had become part of the country.

The reception for Erdogan laid on by German President Christian Wulff on Tuesday evening was also a harmonious affair. But the kind words and grand gestures between the two countries cannot cover the fact that serious tensions exist between them -- tensions underlined by inflammatory comments made by Erdogan in an interview with German daily Bild on Wednesday.

Turkey is one of the world's up and coming nations, and its economy is booming. At the same time, Erdogan is pursuing a new, aggressive foreign policy which is viewed with the utmost concern not only by Turkey's immediate neighbours, but also in Berlin.

After the ceremony in the Foreign Ministry, therefore, the leaders are likely to talk turkey, so to speak. Erdogan and Merkel will meet for a frank exchange of opinions in which sensitive foreign policy issues will be on the agenda -- including the situation in North Africa and the Middle East, the conflict with the Kurds and bilateral relations.

But the tone emanating from Ankara has intensified significantly in recent weeks against Germany. Ahead of his visit, Erdogan fanned the flames even more in his interview with Bild. "German politicians do not give engough recognition to the integration of the three million Turks in Germany," he told the paper. There are already 72,000 Turkish employers in Germany employing 350,000 people, he said. "The guest workers of yesterday are slowing becoming employers, academics, artists," the prime minister added.

Relatively few of the three million Turks are German citizens, though. While many are fully integrated, others speak German poorly and tend to stay within large Turkish-speaking communities. Erdogan called for them to be allowed to hold dual citizenship, something Germany does not generally allow -- a position underlined by the country's Interior Minister, Hans-Peter Friedrich. "I think that those who say, yes, we want to stay in Germany -- with all the consequences, with all the need for integration, should apply for German citizenship," he told broadcaster ZDF. "And then they are not Turks any more -- I think one must make the decision at some point in one's life, and I think that's right."

But in his Bild interview, Erdogan criticised Germany's opposition to dual citizenship and laws which oblige any Turks moving to Germany to speak good German before arrival, saying this infringed their human rights. "If a young Turkish man loves a woman in Turkey and wants to marry her, this is seen as a mistake, as Germany demands that she first learn German. But what is the language of love?" he said.

"It cannot be that the love of young people is only allowed to exist in German by decree," he added.

The issue of integration has long been a source of discord between Germany and Turkey. Just in the past year, Chancellor Merkel had promised to tackle the "obvious existing problems" as the 50th anniversary of the arrival of Turkish guest workers in Germany approached. Erdogan, however, had taken to the stage in front of Turkish audiences in Germany to warn of "assimilation," and demanded Turkish schools in Germany -- something which caused much irritation among German politicians.

There is also the question of Turkey's bid to join the European Union. Erdogan complained that Turkey feels let down by Germany as it pursues the slow-moving bid, which faces broad scepticism. Merkel has argued for Turkey to be granted "privileged partnership" rather than full membership. Erdogan, however, claims that German politicians "should do much more for Turkey's EU accession, because it would massively encourage the integration" of Turks in Germany.

"Because we Turks feel so many positive things about Germany, we feel let down here," he added.

Some in Germany fear that, rather than accept a privileged partnership, there is a risk of Turkey turning away from Europe altogether. In fact, the economically-thriving country has lost interest in the crisis-stricken EU in recent months. With economic growth of around ten percent and a tripling of per capita income since 2002, Ankara is hardly dependent on securing closer economic relations.

German industry figures have long warned of losing Turkish business; Turkey is an extremely important export market for Germany. Even Foreign Minister Guido Westerwelle has said: "We must open the door to Europe wide for Turkey, rather than constantly build new obstacles until one day Turkey turns away from us."

Erdogan's call for regulations to be eased for Turks coming to Germany could also prove uncomfortable for Merkel. The chancellor had announced some time ago that there conditions for Turkish business people in particular would be improved, but nothing has yet happened.

Yet another problem between the two countries is the PKK conflict, with Turkish politicians repeatedly attacking the German government and accusing Berlin of indirectly protecting the Kurdish terrorists. "Twice as many PKK members live in Germany as in the Qandil mountains in northern Iraq," claimed Cemil Cecik -- speaker of the Turkish parliament and a party colleague of Erdogan -- according to the Süddeutsche Zeitung. The prime minister himself has criticized German foundations and accused them of funding the PKK.

One thing is certain: As a regional power, Turkey is starting to flex its muscles. Erdogan was hailed during a visit to the region following the Arab revolts in Tunisia and Egypt and became the symbolic head of the freedom movement. The moderate Islamists who were victorious in the recent Tunisian elections model their Islamic political framework on that of his governing Justice and Development Party (AKP). Erdogan recently made his country's opinion of its own power unmistakeably clear: "Our interests range from the Suez Canal to the Indian Ocean," he said.

Particularly difficult for the Germans is the Israeli question. In the Middle East conflict, Turkey is invariably on the side of the Palestinians, and has called on the UN to recognize a Palestinian state. Germany, however, voted against Palestinian membership of UNESCO. The relationship between Ankara and Jerusalem has fallen to a low point since the incident on the Gaza aid ship "Mavi Marmara" in May 2010, when nine Turkish activists were killed as the Israeli navy stormed the flotilla.

This summer, the Turks threw the Israeli ambassador in Ankara out. Erdogan has promised to provide an escort of warships the next time an aid convoy sets off for the Gaza Strip. During a visit to South Africa a few weeks ago, the Turkish prime minister described Israel as a "threat" to the Middle East.

Israel also plays a role in Turkey's dispute with Cyprus. The situation there is complex: Turkey has occupied the northern part of the island since 1974 and does not represent the Republic of Cyprus -- that is, the larger Greek southern part. The Republic of Cyprus, an EU member state, has claimed the huge gas and oil reserves in the waters around the island and has accordingly signed an agreement with Israel on the demarcation in the Mediterranean Sea. But Ankara was angered because Turkish northern part of Cyprus, recognized only by Turkey, was not taken into consideration. Erdogan announced that the Turkish navy would show its presence there "very often" and would send warships out on patrol. Ankara has also announced a freeze on relations with the EU when Cyprus assumes the rotating presidency next year.

11 Bilder Photo Gallery: How Turkey is Booming Under Erdogan 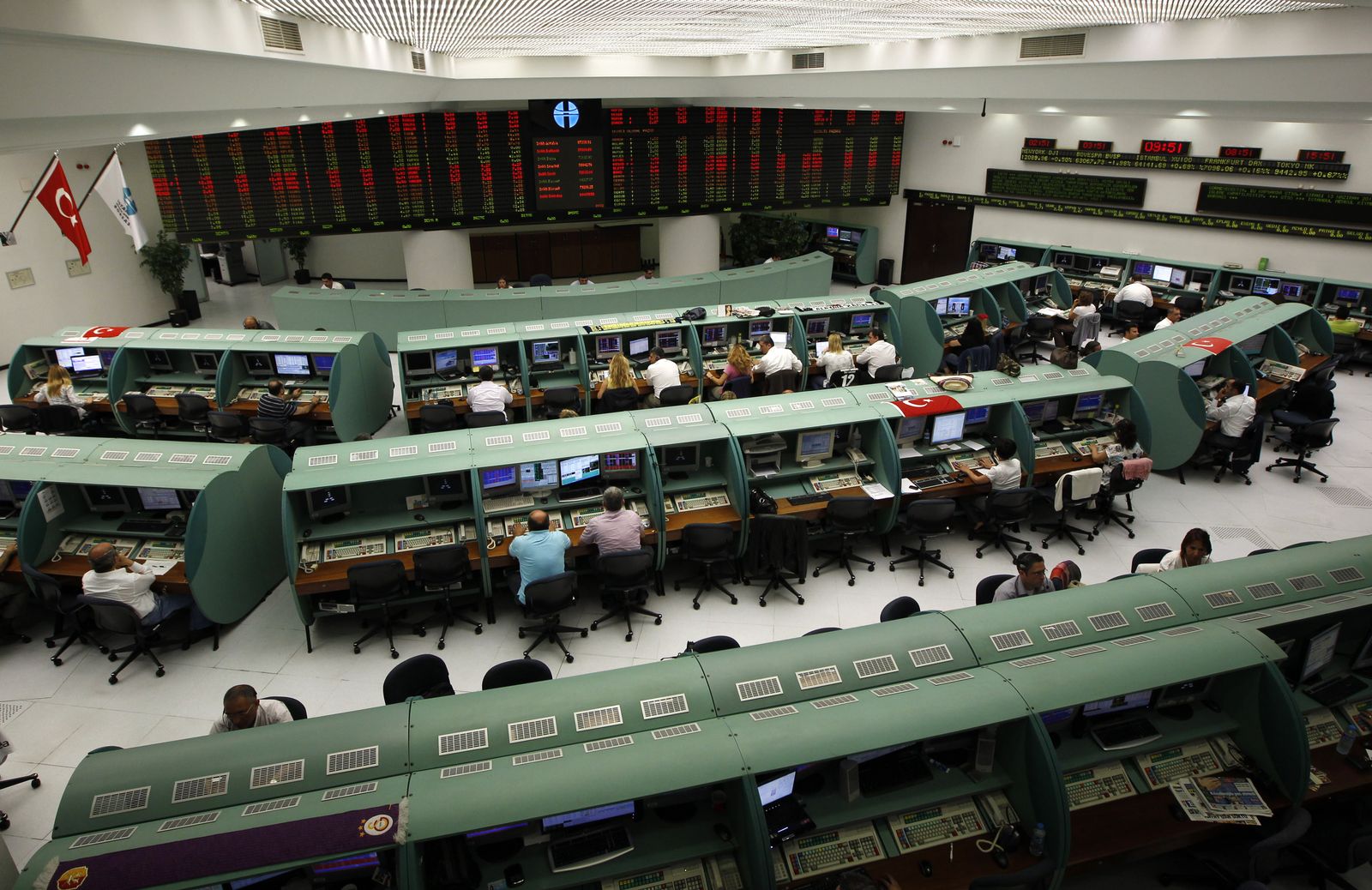 The stock exchange in Istanbul, where share prices have risen sharply.