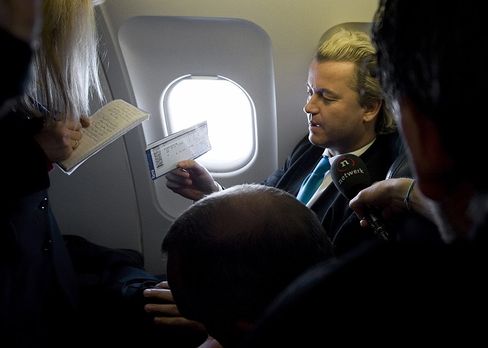 Geert Wilders talks to reporters during his flight to London on Thursday.

Earlier this week, Gerdi Verbeet, the chair of the Dutch parliament, wryly stated that the fact that Britain had closed its borders to Geert Wilders wasn't worth another war with Britain. Still, she added that she firmly disagreed with the British government's decision to refuse the anti-Islam politician entry into the country.

A majority of Dutch politicians feel similarly indignant and resigned about the British ban on Wilders. But there's little they can do about it. The ban is legitimate under British law.

After the 2005 suicide attacks in London, Britain tightened its laws to bar people who promote extreme ideas that pose a threat to national security from entering the country. This ban has been applied 270 times since July 2005.

Regardless whether Wilders treatment was legal or not, most Dutch politicians are at odds with Britain's decision. "Churchill would turn in his grave," said Hans van Baalen, a right-wing liberal (VVD) member of parliament.

Nevertheless, most Dutch people hope the incident won't escalate into a major diplomatic row. Relations with Britain are too important too them. Less than a week ago, Dutch Prime Minister Jan Peter Balkenende visited his counterpart Gordon Brown at 10 Downing Street where they had "a good conversation," according to a spokesman. The prime ministers amicably agreed to halt growing protectionism caused by the economic crisis.

When it comes to free trade policy, Britain and the Netherlands, who were rivals in four naval wars in the 17th and 18th centuries, are now in agreement. Britain is one of the Netherlands' most important trading partners, with roughly 10 percent of Dutch exports (some €31 billion euros) going to the United Kingdom. The relatively large Dutch financial sector is furthermore strongly represented in the city of London, and companies like Shell and Unilever are co-owned by the two countries.

Relations with Britain are valuable, particularly in these times of economic meltdown, and the interests of the trader currently weigh more heavily than those of the clergyman. This is perhaps why protests against Wilders' treatment have mainly been verbal. Dutch Foreign Minister Maxime Verhagen thought he'd gone far enough last Tuesday, when the Wilders ban was announced, in expressing his displeasure to his British counterpart David Milliband. Verbeet did the same at the parliamentary level. She sent a letter to her counterpart at the British upper house and the chairman of the lower house, requesting that they do everything possible to change Britain's ban on Wilders.

All the "common" diplomatic channels have been exhausted. The Netherlands could have decided to recall its ambassador or to suspend diplomatic relations with Britain, but those would have been far-reaching steps with potential consequences.

Besides, although this was never publicly acknowledged, the Dutch Foreign Ministry only leaped to Wilders' defense reluctantly. Wilders' controversial film "Fitna" has already created a lot of extra work for the ministry, not to mention very serious safety risks for Dutch embassies in some Islamic countries.

For his part, Wilders has little appreciation for the so-called "silent diplomacy." That, at least, has been the experience of Dutch Foreign Minister Verhagen. Last summer, when Verhagen wanted to speak with Jordan's foreign minister about the impending prosecution of Wilders in that country, the populist politician immediately went public with information that talks were going to take place.

At the same time, Verhagen, a natural politician, knows that any issue concerning Wilders is sensitive in Dutch politics. His decision to dispatch Dutch Ambassador to the UK Pim Waldeck to Heathrow airport to assist Wilders upon his arrival on Thursday should also be viewed in this light. Because the ambassador was there, Verhagen will be able to say the Netherlands did its utmost when he answers questions about the latest Wilders scandal in the Dutch parliament next week.

"The Netherlands deeply regrets the fact that the United Kingdom did not revoke its decision to refuse Mr. Wilders' entry into the country," a statement issued by the Dutch Foreign Ministry on Thursday read.

In diplomatic terms, "regrets" is code for "don't rock the boat."