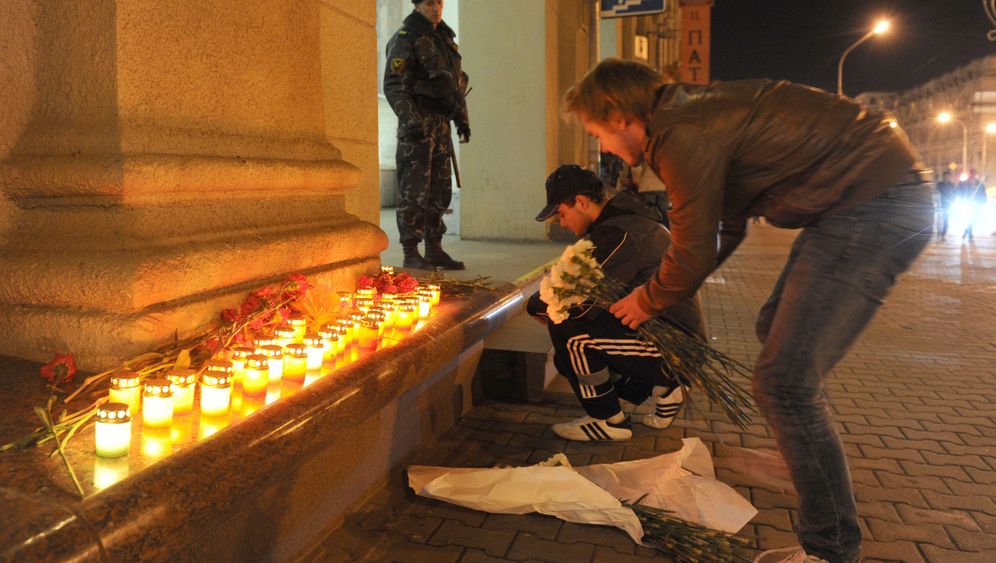 The Belarusian capital Minsk has been shaken by a deadly explosion in the city's subway system. According to the Belarusian intelligence service, 12 people were killed in the blast on Monday evening and 149 injured.

The Belarusian regime swiftly condemned the incident as an act of terrorism. President Alexander Lukashenko said he could not rule of the possibility that forces "from outside" were behind the explosion. Deputy public prosecutor Andrei Shwed described the event as a terrorist attack, without providing further details.

Eyewitnesses reported hearing a muffled bang in the Oktyabrskaya metro station, a busy transfer station which connects Minsk's two subway lines. Belarusian bloggers wrote of two detonations, claiming there had been one explosion on the platform and another on an escalator.

Initial photos after the attack showed people with faces covered in blood. Some of the injured "have no hands left, some of them have no legs," a medic told the Russian tabloid Komsomolskaya Pravda.

The blast happened during the evening rush hour. The subway station is located right in the center of Minsk, just a few hundred meters away from President Lukashenko's residence.

The Belarusian dictatorship has justified its heavy handed rule with the need to provide security and stability for its citizens. Just recently, the president said in an interview with journalists from Russia that he was "obliged to ensure the safety of the people." His popularity was based largely on his promises of peace and modest prosperity.

Lukashenko visited the affected subway station on Monday evening just hours after the explosion. Dressed in a black suit and black tie, he examined the scene, accompanied by his young son Kolya.

The president made a point of showing resolve. Addressing the security forces, he said: "Men, we are facing a very serious challenge. Who are the perpetrators? I ask you to hurry in finding the answer to this question."

The despot also posited a theory of his own. He said he would not "rule out that this gift was brought to us from outside" -- in other words, from abroad.

Fears that Regime Could Expoit Attack

After the presidential elections in December, Lukashenko had accused foreign forces of deliberately trying to destabilize the country. The president claimed at the time that Poland and Germany had financed opposition plans to stage a coup in Belarus.

The motives for the apparent terrorist attack in Minsk remain unclear. The explosion was not preceded by any warnings or threats. Unlike its neighbor Russia, Belarus is not engaged in any armed conflict with Muslim rebels, which would appear to rule out an Islamist motive.

The democratic and pro-European opposition now fears that Lukashenko could try to exploit the deadly incident as a pretext for a crackdown against dissidents. "There are fears that this will be exploited by the state in order to tighten the screws," the Belarusian opposition politician Andrey Kim told the Russian online newspaper Gazeta.ru.

For months, the Lukashenko regime has been trying to portray the democratic opposition as enemies of the people. Belarusian state television described the critical journalist Oleg Bebenin after his suicide as a hired mercenary from abroad and claimed that Bebenin had probably fallen victim to an "act of revenge within opposition circles." Lukashenko himself recently spoke of "bandit groups" that he claimed hunted down unarmed traffic police and broke their legs.

Lukashenko brutally suppressed demonstrations by opponents of the regime after the December 19 election. Several opposition leaders are still being detained and could face long prison sentences.

In Minsk, however, very different rumors were circulating regarding the real perpetrator of the apparent attack. In the Internet, anonymous bloggers wrote that "the picture of the true killer hang in every official office in Belarus" -- a reference to Lukashenko, whose portrait adorns the walls of government institutions and authorities. There is speculation within opposition circles that Lukashenko or the security agencies close to him could have organized the attack themselves in order to divert attention from domestic problems.

Indeed, Belarus is currently facing serious economic problems. In March, the Economics Ministry raised the price of bread by up to 5 percent, a serious blow to pensioners and the poorer rural population.

The wage and pension increases that the government distributed before the election have fueled inflation. Belarusians, however, seem not to trust the regime's generosity. Since then, people have been hoarding foreign currency and precious metals. The demand for gold has increased fivefold in the country in recent months. In Minsk, lines form in front of currency exchange offices. The government has now introduced restrictions on the exchange of currencies.

The country's economic downslide is continuing, however. In early April, the rating agency Moody's lowered the ratings of six Belarusian banks. "If nothing happens," complains Victor Margelov, head of an employers' confederation, "then our economy will not survive until July."