The arrest warrant, dated Jan. 28, 2009, carries the seal of the Republic of Austria. Page four is significant: It accuses the suspect of nothing less than murder. The European arrest warrant is issued for a Russian citizen with the name Lecha B., born in March 1975, with his last listed address being Unterhimmler Strasse in Steyr, Austria.

Lecha B., is strongly suspected of having fired the shots that killed Umar Israilov on Jan. 13, 2009, a Chechen living in exile who had accused Chechen leader Kadyrov of torture. The files in the investigation state that there is conclusive evidence against Lecha B. -- whom eyewitnesses had placed at the scene of the crime. Up until now, however, there has been no trace of the suspect. As a result, the spectacular trial in Vienna that began last week has so far only focused on three men who are believed to have abetted the murder.

Chechen President Kadyrov himself is claiming innocence, even granting interviews to German newspapers. Indeed, there has even been speculation that he might be questioned in the trial by video from the capital of Grozny.

Should such a video conference come to pass, it could provide Kadyrov with an opportunity to answer questions about when he met with Lecha B., the wanted man. Chechen exiles in Austria claim to have identified Lecha B. in a recent broadcast on Russian television. Should they be right, it could have major political repercussions.

A few days ago, the Russian television broadcaster Vesti aired a report about a meeting in Grozny that took place in mid-September, during which Chechens came together in order to discuss the "reconciliation of blood feud enemies."

The true sensation in the clip, however, came 2:46 minutes into it, where Lecha is said to appear. The man can be seen wearing combat dress and a green tubeteika, a typical headdress. The video also shows that a man named Sultan Mirzayev, Kadyrov's mufti, has been named the head of the Reconciliation Commission and is leading an event on the reconciliation of enemy clans that those present have apparently agreed to.

A sought-after suspected murderer at a peace conference? Chechens in Vienna assured SPIEGEL that they clearly recognized Lecha B., the man who managed to evade Viennese investigators. He is thought to have fled through the Czech Republic, Poland and Belarus to Russia. On Jan. 25, 2009, investigators traced the location of his mobile phone for one last time in Russia. Investigators say that his flight strengthens their conviction that he is the perpetrator of the crime.

Before he fled, investigators found a jacket containing Lecha B.'s DNA and smoke residue in a container not far from the scene of the crime. Given the evidence, he is described as the "main perpetrator" in the case. 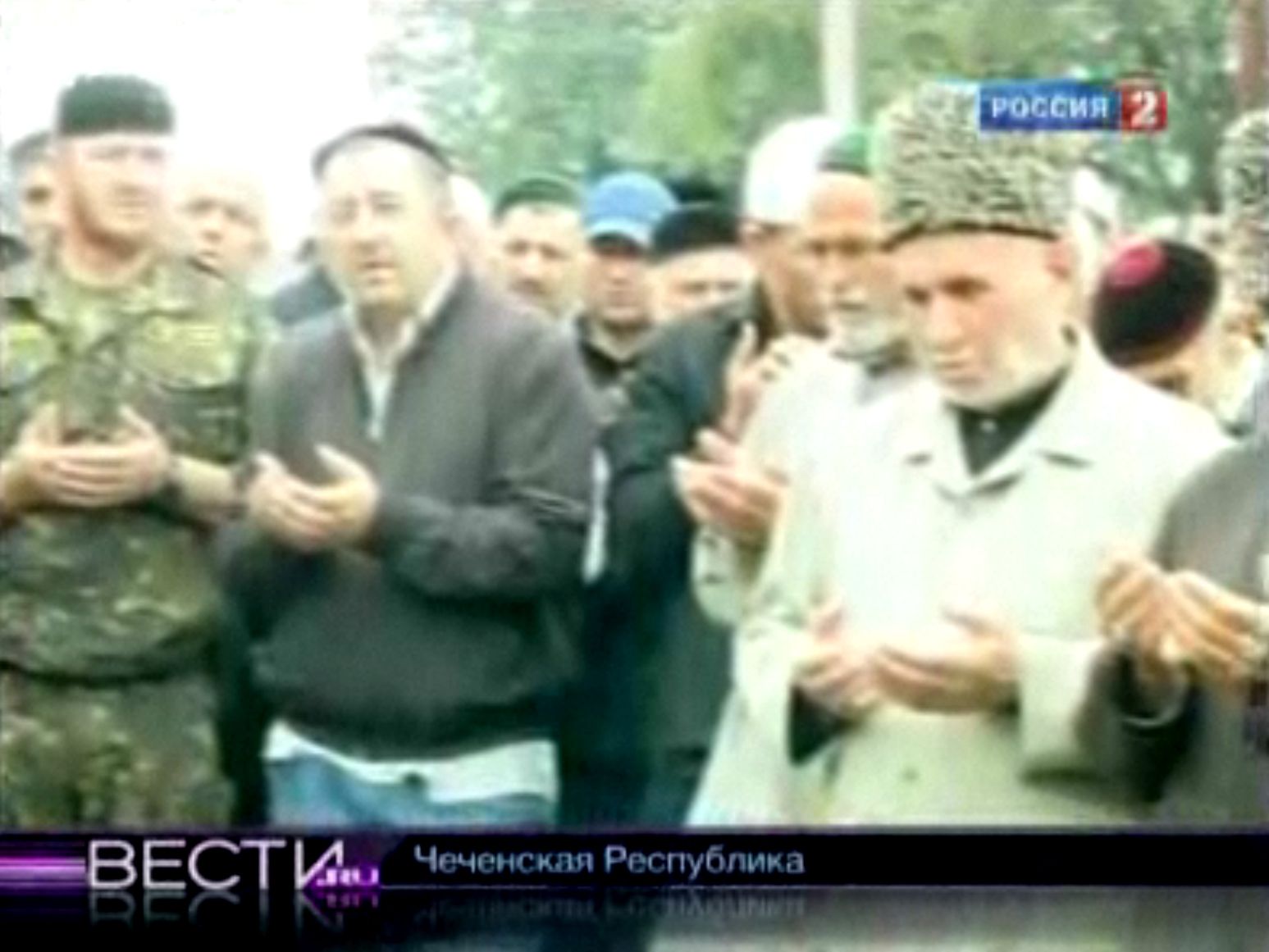 A Russian TV Vesti, in one of its reports about reconciliation of blood feud enemies in Chechnya, is believed to have accidentally filmed the suspected killer of Umar Israilov, Lecha B. (left).