Sometimes, it doesn't take long for the most perfect of plans to go awry. Mario Monti, professor of economics and a former European commissioner, was heavily supported by Berlin when Italy was searching for a successor to Silvio Berlusconi as prime minister. Monti was to introduce far-reaching austerity measures in the heavily indebted country -- measures seen as vital to prevent Italy from dragging the entire euro zone down with it.

Monti, initially, did what was expected of him. He immediately passed a savings package worth €30 billion ($38 billion). And Berlin figured that more was on the way.

Now, though, the Italian prime minister seems to have lost his enthusiasm for austerity. He has begun pursuing a different direction -- one diametrically opposed to that which German Chancellor Angela Merkel would like to see. And on Wednesday, the two are set to meet in Berlin to talk about their differences.

The list is not insignificant. Monti would like to see the euro bailout fund expanded by hundreds of billions of euros in order to dramatically increase its reach and effectiveness. In addition, he wants the euro zone to collectivize debt in the form of euro bonds as a way of making it cheaper for heavily indebted countries in the common currency union to refinance their debt. Furthermore, the European Central Bank should, he believes, play a larger role in propping up struggling euro-zone countries and stabilizing the euro. And, he wants to begin moving away from austerity in favor of promoting economic growth.

It is a list that coincides to a large degree with French President Nicolas Sarkozy's own wish list. But Berlin has so far proved immovable. After all, no matter what strategy is pursued in the ongoing fight to stabilize the European common currency, Germany, as the bloc's richest country, will have to pay the lion's share of the bill. And for Merkel, that is not a recipe for popularity in Germany; she would prefer to risk aggravation with her European Union partners.

So far, she has largely been able to block, or at least delay, Sarkozy's proposals. Now though, with Italy, the EU's third-largest economy, throwing its weight behind France, that will become more difficult. Late last week, Monti was in Paris to consult with Sarkozy on their future course, and the meeting was by all accounts a harmonious one. At the moment, according to Jean-Paul Fitoussi, a professor of economics at the Institut d'Etudes Politiques in Paris, "there is more common ground between Italy and France than between France and Germany."

Furthermore, Sarkozy and Monti seem intent on leveraging their agreement on the EU stage. "La Merkel has to understand," the Roman daily La Repubblica quoted a government official as saying following Monti's trip to Paris, "that we are now two."

Following the meeting between Merkel and Sarkozy in Berlin on Monday, the official message was, as usual, one of harmony. "There is no future for Europe if Germany and France do not agree," Sarkozy said predictably. But on several fundamental issues, the two are far from unified.

The French president, for example, would like to see the immediate introduction of a tax on financial transactions. Merkel, though, prefers a slower pace. "Personally, I would also like to see us in Europe consider such a tax," she said. But as yet, she added, there is no consensus within her government in Berlin. Furthermore, even as "Merkozy" -- as the two are frequently called in the media -- insist that the "priority" is "growth and employment," it quickly becomes clear that they disagree on how to achieve that goal. Priority number one for the Germans remains that of paying down sovereign debt.

Sarkozy, however, is facing a difficult re-election campaign and can't afford to sit back and wait for things to improve. As such, Monti is a godsend. The Italian prime minister too believes that Germany's strict adherence to austerity has its limits. Italy, says Monti, has "fulfilled its obligation." Now it is time to change course. The "fiscal pact" pushed through by Berlin in December cannot be allowed to "strangle" the economies of struggling euro-zone countries.

On the eve of his meeting with Merkel, Monti upped the ante. "If Italians don't see concrete results from their support of austerity and reform in the foreseeable future, a protest will develop against Europe -- and against Germany, which is seen as the leader of EU-intolerance, and the European Central Bank," Monti told conservative German daily Die Welt in an interview published on Wednesday.

"I have demanded difficult sacrifices from the Italians," he continued. "But I can only insist on them if they result in concrete benefits."

Indeed, despite the billions in savings, the markets continue to speculate against Italy, with interest rates on 10-year bonds still hovering near 7 percent. France too has been under pressure of late and is threatened with losing its triple-A credit rating -- which would cost the country billions and result in a need for additional savings measures. Each austerity package, in turn, takes money out of the pockets of both pensioners and workers. In addition, it means that companies struggle to attract business and the number of bankruptcies increases. The crisis, it would seem, gets worse with each new step that is taken to fight it.

It is a trend that Monti and Sarkozy would like to put a stop to -- and they want the euro bailout fund and the European Central Bank to provide the necessary buffer. Then, they believe, national governments would have room to stimulate economic growth.

Not Good for the Vote Count

The Italian prime minister, to be sure, is not in favor of simply dumping money into the economy and taking on more debt, as his predecessor showed a penchant for doing. He hopes to be able to weaken some of the powerful trade unions that dominate parts of Italy's economic landscape, driving up prices for consumers and pushing down productivity. It is, however, a fight that will likely take years to achieve noticeable results.

Thus, Monti is hoping for short-term measures from the European Commission. He wants to finally see the remaining protected national markets in Europe -- for insurance, banks and logistics companies for example -- completely opened up. The move, Rome hopes, would drive growth across the EU.

Even this idea is not one which Berlin fully supports. Several areas of Germany's labor and service markets have benefited immensely from a variety of barriers protecting them from too much foreign competition. A Brussels initiative to open up the services market has already failed once in the face of German opposition. And on this issue, Merkel also has the support of her partners in Paris. France too has preferred to protect parts of its market against too much competition -- and Sarkozy is not likely to want to change that in the middle of his re-election campaign. After all, street protests are not good for the vote count. 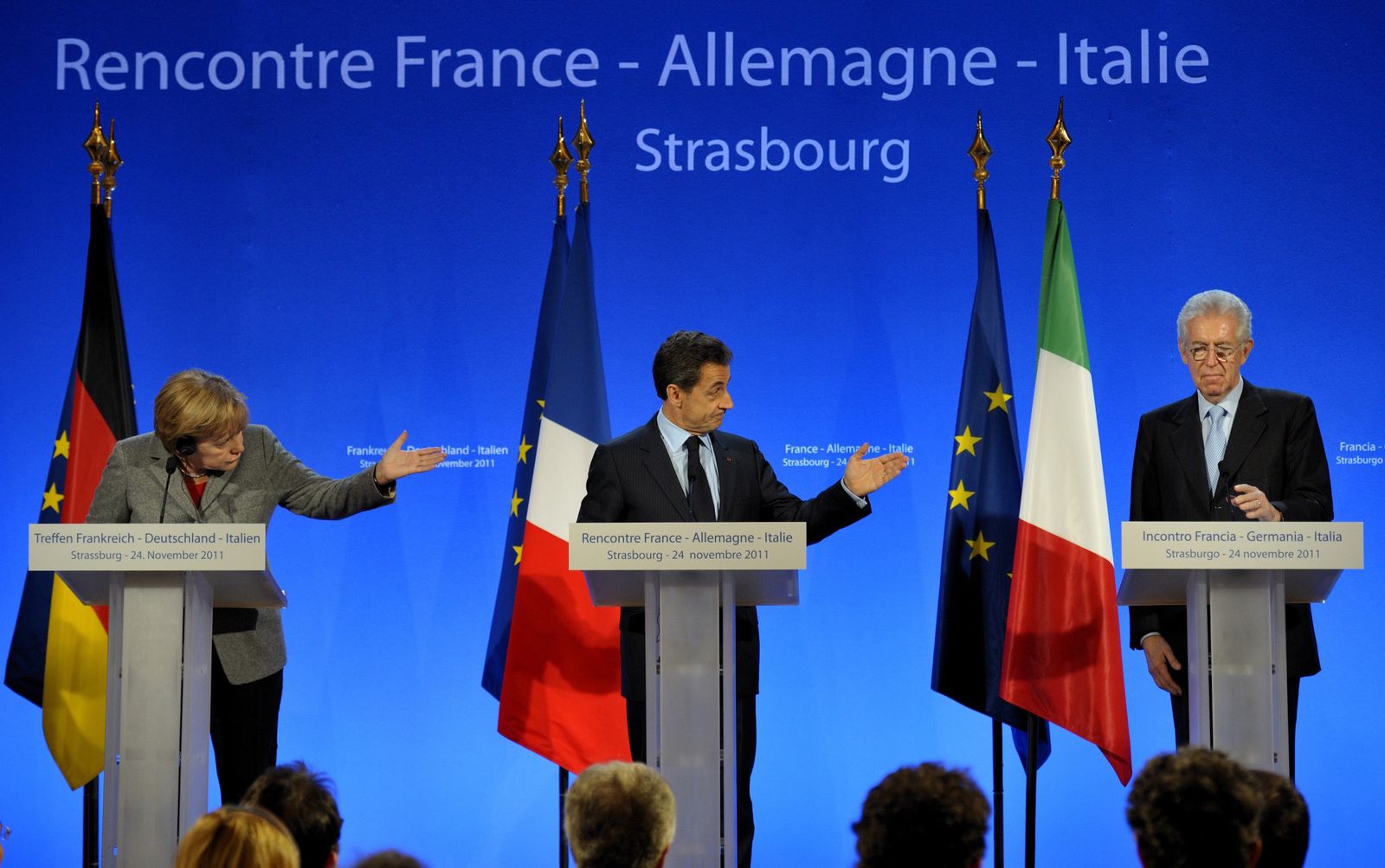