As Yulia Tymoshenko prepared to speak at a press conference in Kiev on Sunday evening, it had already become clear that she had not manage to achieve the majority she hoped for in Ukraine's presidential runoff election. Exit polls indicated that she trailed her rival Viktor Yanukovych by several percentage points.

Dressed in a brilliant white dress with a large shiny brooch, she strode energetically up to the podium, making her way through a throng of supporters and journalists. "I am convinced," she told the crowd, "that the majority of citizens have voted for a democratic, European and strong Ukraine." 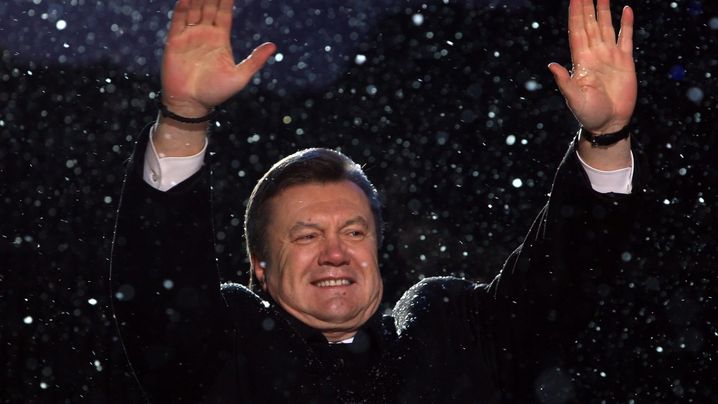 Ukrainian electoral law stipulates that a simple majority is all that is necessary in a runoff. But with the gap between the two candidates so narrow, Tymoshenko, currently the Ukrainian prime minister, has so far refused to acknowledge defeat. Indeed, she appears to be keeping open the possibility of challenging the election result in court over alleged fraud.

Every single vote could be crucial, she told the news conference. Tymoshenko only took three minutes to deliver her address. Then she disappeared into the Kiev night.

Conflict Could Escalate on the Streets

Once again, it looks as though Ukraine is headed for political stalemate. For years, the country has been divided between those, like Tymoshenko, who would maneuver the country toward the European Union and NATO, and those like Yanukovych who prefer a more cautious approach to the West. Sunday's election did little to resolve the tension -- and a court case could inject even more bitterness into the rivalry.

Indeed, the two sides have spent recent months competing for influence over the judiciary. But there is also concern that the conflict could spill out into the streets. Tymoshenko, as one of the leaders of the Orange Revolution in the winter of 2004-2005, continues to see mass street protest as potentially a valuable political tool. In the run-up to the election, she threatened to call for massive protests, speaking of a "new Maidan," referring to Independence Square in the heart of Kiev where the Orange Revolution played out. Back then, hundreds of thousands protested against Yanukovich's allegedly fraudulent election victory and helped the then-allies Viktor Yushchenko and Tymoshenko to become the country's leaders.

This time around, Yanukovych will not let his opponent take control of the streets so easily. He said he was expecting 50,000 participants at a massive rally outside the Central Election Commission building in Kiev on Monday.

"The election result is a surprise," says Vadim Karasev, director of the Kiev Institute for Global Strategies. "Three or 4 percent between the two candidates -- by Ukrainian standards, that's a photo finish." Now the country is headed straight for the next major political crisis, he says. Even if Yanukovich prevails in the end, the country remains deeply divided.

Indeed, should he win, Yanukovich's Party of Regions will likely face difficulty forging a stable parliamentary coalition, which it would need to oust Tymoshenko from her position as prime minister. "I thank all voters," Yanukovych said Sunday in his brief victory speech, "even those who did not vote for me." He promised to unite the divided country, but doubts remain as to whether he is capable -- especially given the deep East-West divide in Ukraine.

Yanukovich managed just 25 percent of the vote in Kiev. He failed to beat Tymoshenko in a single western or central region (known as oblasts in Ukraine) of the country. The Russian-speaking eastern half of the country, which is dominated by heavy industry, is firmly behind Yanukovich. He got 90 percent of the vote in his native Donetsk region, 88 percent in Luhansk and 79 percent in Crimea.

On Sunday, both camps based their headquarters in the heart of Kiev: Tymoshenko at the upscale Hyatt hotel, Yanukovich at the Intercontinental -- just a stone's throw apart. The Intercontinental stands in the shadow of the impressive St. Michael's Monastery, while the Hyatt is next to St. Sophia's Cathedral. The rival candidates had concluded their election campaigns Sunday with large rallies in front of the two churches, with Tymoshenko holding an elaborately staged "Prayer for the Fatherland." On election night, the two churches, with their golden cupolas, looked like two mighty fortresses, a symbol of the opposing camps.

Tymoshenko and Yanukovych are almost equally powerful. Each has the support of half the country. Yet neither of them is strong enough to unite Ukraine.