The European Union's budget summit on Nov. 22 appears set to collapse after Britain's House of Commons on Wednesday evening demanded that Prime Minister David Cameron push through major cuts to the EU's seven-year draft budget. The parliamentary vote is non-binding, but it still significantly limits Cameron's room for maneuver.

In three weeks, the leaders of the 27 EU member states plan to meet in Brussels to approve the next budget for the European Commission, the club's executive, covering the years from 2014 to 2020. The British government had previously announced that it wanted to freeze the budget at its current level. But for a majority of British lawmakers, that doesn't go far enough. The opposition Labour Party aligned with dozens of MPs from the right wing of the Conservative Party in an attempt to force Cameron to adopt a more radical course in Brussels.

"At a time when he is cutting the education budget by 11 percent, the transport budget by 15 percent and the police budget by 20 percent, how can he even be giving up on a cut in the EU budget before the negotiations have begun?" thundered Labour leader Ed Miliband.

Miliband then sought to stir parliament against Cameron, saying the prime minister was "weak abroad and weak at home" and claiming: "It's John Major all over again." In British politics, there are few insults worse than a comparison to the unpopular former prime minister.

The new rhetoric coming from the traditionally pro-European Labour Party is indicative of just how deep-seated anti-EU sentiment has become in the United Kingdom. To be sure, Labour MPs formed allied with the EU-skeptic wing of the Tories primarily out of political expediency; they wanted to create an embarrassment for the prime minister. Still, the stance mirrors the sentiment of a majority of Brits.

Members of parliament with all parties have argued that they cannot justify to British voters a situation in which the EU's administrative organs are not being subjected to major cuts at a time when radical savings are being undertaken in the UK's public sector.

The prime minister had already told parliament that he would exercise his veto power in Brussels if the EU budget increase is greater than the cost of inflation. Now he will be left with little choice but to remain firm. His government would seem to have wasted little time in adopting the new message. On Thursday morning, British Chancellor of the Exchequer George Osborne promised to negotiate hard over the EU budget. "We will veto any deal that is not good for the British taxpayer," he said.

Deputy Prime Minister Nick Clegg on Thursday indicated that the situation could even lead to the UK's departure from the EU. "You will never achieve (anything) by stamping your foot and saying, 'Well, we want to be part of this club, we want to unilaterally rewrite the rules of the game and we want to pick and choose unilaterally what we sign up to," he said in a speech to international affairs think tank Chatham House. "My worry is that it is a much shorter leap from that to an outright crisis which would leave the United Kingdom fully marginalized or even out of the EU than people seem to imagine."

EU Could Extend Negotiations into Next Year

The Brits aren't alone in their demand to freeze the budget. Other EU net contributors, including Germany, believe that increases to the Brussels budget cannot be justified to the public. But the other countries appear to be more willing to compromise with the European Commission.

The Commission is calling for a budget of around €1 trillion ($1.29 trillion) for the next fiscal period between 2014 and 2020. The Commission's draft budget has been backed by the European Parliament as well as net recipient countries -- those EU member states that receive more in subsidies than they pay into the coffers.

Berlin is seeking to shave €100 billion off the budget. London want to go further and freeze the EU budget at its 2011 level, permitting only an inflationary adjustment, which would effectively trim the Commission's budget plan by €200 billion.

In principle, German Chancellor Angela Merkel and Cameron will be fighting on the same side at the summit. But they both have very different starting positions. Merkel wants a swift agreement. She feels that a fight over the budget will distract attention from the more important task at hand of rebuilding the euro zone. From Cameron's perspective, however, his political authority will rise or fall on the budget issue. As such, he insists that Britain will only agree to a deal that meets its specifications. If necessary, the leaders will extend negotiations into 2013.

A Veto Could Get Expensive for London

A paralyzing debate lasting months is the last thing Merkel wants. In an effort to push things forward, she plans to visit Cameron in London on Nov. 7 to urge the prime minister to take a step toward compromise as others have as well. It seems doubtful that she will find much success. Cameron reiterated on Wednesday that he would apply his veto if the other EU member states didn't fall in line with his position.

Approval of the EU budget requires a unanimous vote -- without a "yes" from London, the seven-year financing cannot be passed. Still, a veto wouldn't be in Britain's interests, either. If London did take the step, it would mean that a new EU budget would have to be passed each year until a deal could be reached on longer-term financing. The catch for Britain is that an annual budget would require only a qualified majority, meaning other EU member states could overrule the UK. It's likely the budget would then increase each year. Indeed, this is the argument Cameron is using within his own party to convince lawmakers that some sort of deal in Brussels would be better than none.

Still, no agreement seems to be materializing on the horizon. After consulting with all EU governments, Cyprus, which currently holds the EU's six-month rotating presidency, proposed a compromise on Monday that would see at least €50 billion shaved off the Commission's budget plan. The proposal, however, was swiftly reject by both camps. The Commission as well as Poland, the largest recipient country, said the cuts go too far. But Michael Link, a minister of state within the German Foreign Ministry said the cuts proposed "fall markedly short of those that are necessary."

For their part, officials at the European Commission are arguing that they need more money in order to promote economic growth and research and development in the EU in order to offset stark economic and structural differences between the regions. They have also pointed out the contradictory position of member state leaders who are fond of approving EU economic growth programs at summits but then turn around and decline or backpedal when it comes to actual EU investments. It's an objection that is justified. It is also true when it comes to the much vilified EU bureaucracy. Administration only accounts for 6 percent of the total EU budget, a much smaller share than that spent on administration by individual member states back home.

These objections seem to be falling on deaf ears in EU member states. The Commission has the misfortune this time around of having to conduct negotiations amidst the worst budget crisis in the EU has seen in years. Even in 2005, the last time an EU budget got approved, the task proved to be a very arduous one. But in times of scarcity, opposing interests become even more entrenched.

Berlin, Stockholm and London are also demanding further cuts to the EU's famous agricultural subsidies before they will agree to send more money to Brussels. Agricultural subsidies currently represent the largest single share of the EU budget, at 40 percent -- a fact which would seem to contradict the Commission's argument that it will strengthen the European Union's overall competitiveness with its investments.

Meanwhile, Britain isn't alone with its threat to veto the budget. On Wednesday, the French government said that it would not accept the budget if agricultural subsidies are reduced. 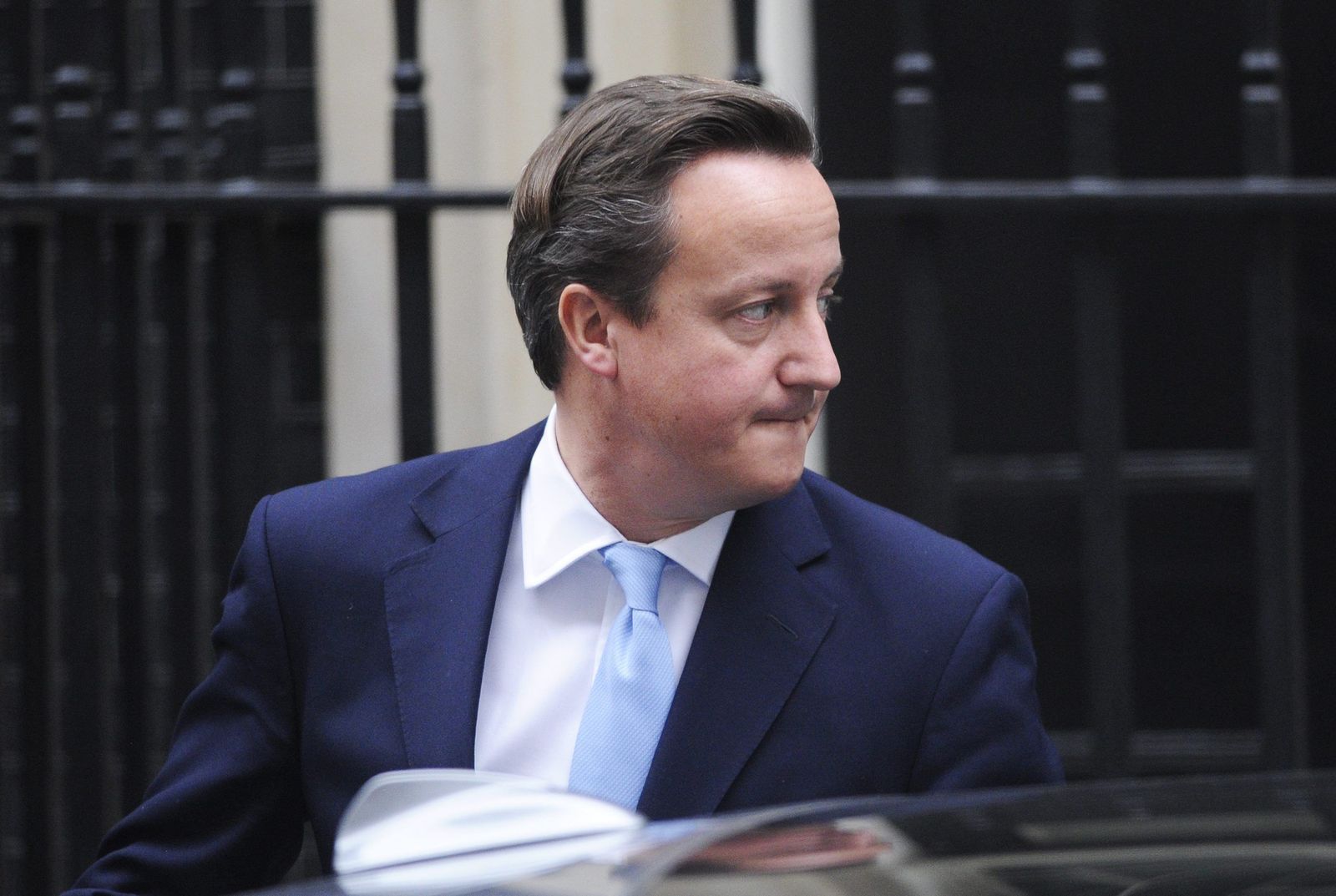 Limited room for maneuver: After Wednesday's vote in the House of Commons, British Prime Minister David Cameron is expected to take a hard line in EU budget negotiations.