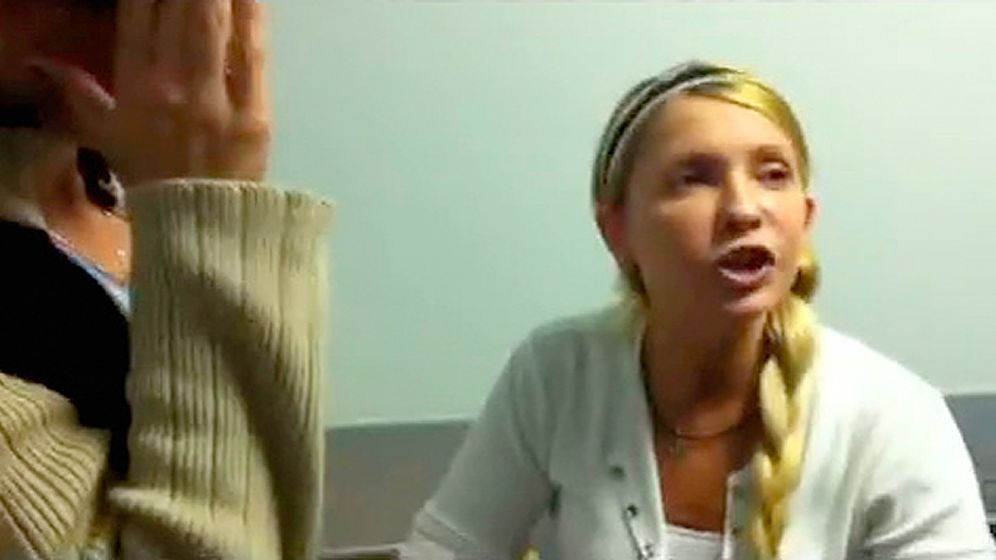 The crime in question occurred so long ago that solving it would be difficult even in a country with a better functioning legal system than Ukraine. In 1996, businessman Yevhen Shcherban was fatally shot at the airport in the eastern Ukrainian city of Donetsk. Shcherban was a member of the country's parliament, but more importantly he was also one of the country's "bisnismeni" -- half entrepreneur, half mafia -- who made a fortune after the collapse of the Soviet Union. Shcherban worked in the gas trade and his company Industrial Union of Donbass made its profits importing gas from Russia.

In doing so, the public prosecutor's office argues, Shcherban became "one of the obstacles" to competing "bisnismeni" looking to expand their own interests in the city of Dnipropetrovsk. Tymoshenko also comes from this city, which dominated the Ukrainian economy in the mid-1990s. "Kiev may be the country's political capital, but its economic heart is in Dnipropetrovsk," the Financial Times wrote at the time.

Another businessman from this industrial center on the Dnieper River went on to become the country's prime minister during the same period, a man whose name is closely linked to Tymoshenko's in the prosecutors' charges: Pavlo Lazarenko.

Transparency International named Lazarenko the eighth most corrupt political leader in the world and in 2006 a US federal court sentenced Lazarenko to nine years in prison for money laundering and extortion. According to court files from that case, Lazarenko diverted hundreds of millions of dollars in Ukrainian public funds during his time in office, transferring the money to foreign bank accounts.

$3 Million for the 'Sailor'

The natural gas business was considered particularly lucrative in Ukraine in the 1990s. In 1995, Lazarenko wanted to award the monopoly in gas imports to Tymoshenko's company United Energy Systems. In return, the prosecutors claim, Tymoshenko "systematically transferred 50 percent of all profits to bank accounts stipulated by Lazarenko."

Regional authorities in Donetsk, though, weren't willing to sit by and watch their rivals in Dnipropetrovsk edge them out of the lucrative gas business. Instead, the regional government granted itself rights to gas imports in the region. The company that benefitted from this arrangement was Shcherban's Industrial Union of Donbass.

Shcherban's Yak-40 aircraft landed in Donetsk on Nov, 3, 1996. The businessman was returning from Moscow, where he had attended the silver wedding anniversary celebration of singer Joseph Kobzon, known as "Russia's Frank Sinatra."

The hired killers followed as Shcherban's red Cadillac drove onto the airfield and when Shcherban disembarked from the plane, they fired at him with a Tokarev pistol and a submachine gun. Shcherban was fatally wounded, as were his wife and the flight mechanic. Even for Ukraine, where at the time contract killings were not uncommon, it was a shockingly brutal crime.

"He got in the way, so he was killed," says Renat Kuzmin, the country's first deputy prosecutor general and a powerful figure in Ukraine's legal system. Prime Minister Lazarenko, he claims, hired the hit on Shcherban, while Tymoshenko paid the fee to a gangster known by the nickname "Sailor." It is claimed that $3 million changed hands.

Prosecutor Kuzmin has a number of witnesses he says can prove Tymoshenko's involvement. Serhiy Zaitsev, for example, claims Tymoshenko had received a threat: One day, he says, someone brought a cake into her office bearing the inscription, "Greetings from Donetsk, the next time it will not be a cake." In other words, the next time it might be a bomb. Zaitsev says it was this that caused Tymoshenko to turn to Prime Minister Lazarenko, who set about "solving the Donetsk problem."

Another witness is Ihor Maryinkov, who was once "an important businessman in Donetsk with contacts to the criminal world," as he himself says. Maryinkov admits that he never had anything to do with Lazarenko or Tymoshenko directly, but he claims those who carried out the hit confided in him that "Yulia was the one organizing it all."

Tymoshenko's lawyers want to know why Maryinkov is only now coming forward with his accusation, since he has appeared in court previously. Maryinkov's answer is, "I don't know."

Tymoshenko's supporters are convinced current President Viktor Yanukovych is trying to frame Tymoshenko for the murder, to take his political rival out of the picture once and for all. "If they could, they would shoot Tymoshenko," says the former prime minister's lawyer and confidant Serhiy Vlasenko.

The case against Tymoshenko is certainly a shaky one. All witnesses named in the case so far have nothing more than rumors to draw on. And proving the charge isn't made any easier by the fact that Shcherban's murderers themselves didn't live long either. One was shot in 1997, another died in pre-trial detention and a third seems to have disappeared.

This means that the sole one of Shcherban's killers the authorities managed to catch alive plays a key role in the upcoming trial. Hitman Vadim Bolotskikh, nicknamed "the Muscovite," was accused of firing shots at Shcherban and sentenced to life in prison. Tymoshenko's lawyers fear the government will offer Bolotskikh early parole if he agrees to incriminate Tymoshenko.