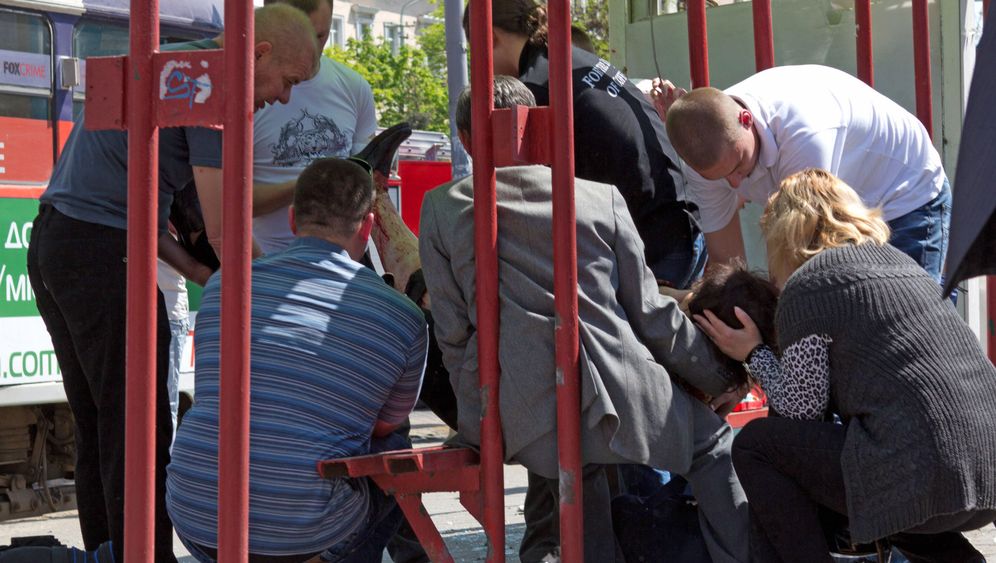 A series of explosions struck the city center of the eastern Ukrainian city of Dnipropetrovsk on Friday, injuring at least 27 people in what authorities have described as a terrorist attack.

According to a spokeswoman from the country's Emergency Situations Ministry, the first blast struck a tram stop in the center of the city injuring 13. Thirty minutes later, a second explosion targeted a cinema, where 11 people were hurt, including nine children. A third blast struck a highly trafficked street near the main train station, injuring three. It is unclear whether anyone was injured in a fourth detonation in the city center.

Ukrainian President Viktor Yanukovych said the attacks represented "yet another challenge for the whole country." He said that authorities would come up with "an appropriate response" and pledged that Ukraine's top investigators would be put on the case, according to the Interfax news agency. Interior Minister Vitaly Zakharchenko and the deputy heads of the Prosecutor General's Office and the national security service immediately boarded a plane for Dnipropetrovsk.

It remains unclear who might be responsible for the attacks. A spokesman for the Prosecutor General's Office said authorities were treating the series of explosions as a terrorist attack. An explosion occurred in the city last year, but the perpetrators never having been found.

Host of the European Championship

The blasts took place just over a month before Ukraine is set to co-host the European Football Championship tournament with Poland. Dnipropetrovsk, with a population of 1.1 million and located some 400 kilometers (249 miles) southeast of the capital city of Kiev, is not scheduled to host any of the matches. The Union of European Football Associations (UEFA), which puts on the tournament, has said it is too early to comment and is "monitoring" the situation.

The city is the birthplace of Yulia Tymoshenko, the imprisoned opposition leader who embarked on a hunger strike this week. Tymoshenko's case has aroused significant attention in Europe, given what many believe to be the political nature of the trial against her and her October sentence to seven years behind bars.

Her declining health, the result of a slipped disc, is also cause for concern. German President Joachim Gauck this week cancelled a planned visit to Ukraine in protest over her treatment and the European Commission on Friday issued a statement warning Ukraine to adhere to international judicial standards.

Meanwhile, Berlin's Charité hospital has offered to treat her and urged Yanukovych to allow her to travel to Germany for specialist treatment during a press conference on Friday. Ukraine has so far refused to allow her to go.