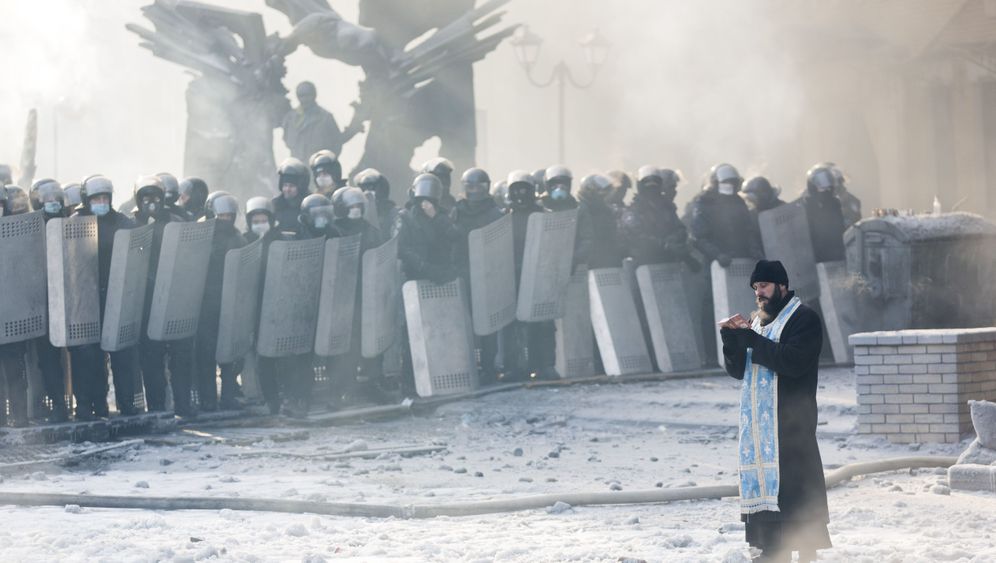 Dressed in jeans and a down jacket, the parliamentarian who wants to overthrow Ukraine's president by any means necessary is standing in Kiev's Maidan Nezalezhnosti, or Independence Square, where a struggle for power has played out over the last two months. "What can our cobblestones, Molotov cocktails and burning tires do against water cannons, bullets and armored cars?" asks Igor Myroshnychenko. "Many people here are prepared to die."

Under his jacket Myroshnychenko wears a traditional embroidered Ukrainian shirt. He is among the leaders of the right-wing nationalist Svoboda (Freedom) Party, which has formed a coalition with former heavyweight boxing champion Vitali Klitschko's Udar Party, along with jailed former leader Yulia Tymoshenko's Fatherland Party, against President Viktor Yanukovich.

Myroshnychenko tried a few days ago to prevent the passage of an amendment that limits the right to demonstrate. Soon after the president signed it, Myroshnychenko and three other Svoboda MPs marched into the printing plant where the government newspaper was being completed. New laws only take effect once they have been published. Part of the print run had already been sent off in trucks but protestors burned the remainder on Maidan Square.

Government opponents have been erecting increasing numbers of barriers in the center of Kiev in recent days, and the country is on the brink of a "partisan war," Myroshnychenko says. "A lot of blood will flow, including the blood of innocent people. I have no hope that Yanukovich will meet even a single one of our demands."

Last week, three people lost their lives in the protests, with and one of them showing injuries consistent with torture. Hundreds of demonstrators have been injured.

By European standards, the course taken by the president last week made no sense. Viktor Yanukovich has done nothing to solve the conflict for two months. And then he poured oil into the flames by whipping through a package of laws hostile to democracy.

But not even a man with political horizons as limited as Yanukovich can have wanted what is now happening in Ukraine. The stage has now been set for civil war, and the hatred between pro-Europeans and friends of Russia has turned bloody. Yanukovich supporters regard the demonstrators as "extremists and terrorists;" even Prime Minister Nikolai Mykola Azarov used those words on television as if they were self-evident. Arsen Klintshayev, a government party parliamentarian in Lugansk, says it was "totally right" that the first demonstrators have now been killed. They had turned against the country's leadership and one should "take a much harder line against the protesters."

Igor Myroshnychenko, meanwhile, regards the Yanukovich supporters as "fascists and bandits" who want to turn democratic Kiev into a "mafia-like Donetsk." Donetsk is a mining center in the Russian-speaking east of Ukraine. In the 1990s, the city saw bloody power struggles between rival businessmen. Yanukovich, convicted of theft and causing bodily harm, comes from there and represents the interests of Donetsk-based oligarchs.

The scope for talks between the two sides is eroding and the country is growing increasingly divided. Ukrainians who have thus far stayed out of the protests are starting to join the activists. Last Thursday, people stormed city halls and regional parliament buildings not just in western bastions of resistance like Lviv and Ivano-Frankivsk but also in Cherkasy and Poltava in the east. They forced governors to sign their resignations and blocked public offices. Over the weekend, the protests spread further still, while in Kiev, demonstrators temporarily took control of the Justice Ministry.

Leonid Kravchuk, Ukraine's first president, said that the current government is making matters worse, referring to the scandalous passage of the demonstration laws which weren't discussed in parliamentary committee. The vote took place by hand signs in a turbulent parliamentary session and the head of the parliament signed the laws immediately, in contravention of rules.

The amendments are in line with Russian laws but the punishments are even stiffer. In Russia, "organizers of mass unrest" face four to 10 years in jail, compared with 10 to 15 in Ukraine.

Former Ukrainian Justice Minister Sergey Golovaty says the events of recent days were stage-managed by Moscow, not by Kiev. Ukraine's political regime, he says, is to be "aligned with that of Russia and Belarus." The regime needs a pseudo-judicial basis for repression. That is why Yanukovich is steering towards a violent outcome of the crisis, Golovaty believes.

That assessment is consistent with the dismissal of the moderates from Yanukovich's team, including the head of the presidential office, Sergey Levochkin who had favored entering into a dialogue with the opposition. He was replaced by a Donetsk-based supporter of Yanukovich who is reported to have ordered the first violent clearance of Maidan Square in November.

Yanukovich's unwillingness to compromise also has to do with the weakness of the opposition. The protests of pro-European Ukrainians, which began eight weeks ago, took Klitschko and the heads of the allied opposition parties by surprise. Last week, they were once again overtaken by events when militants took the initiative on Kiev's Maidan Square out of frustration that the three opposition leaders were unable to get what they demanded of the country's leadership.

Svoboda member Myroshnychenko is likewise not a fan of Klitschko. His development as a politician is moving "rather slowly," he says sarcastically. "I don't think that he can take over leadership of the opposition, much less leadership of the aggressive Maidan." What he doesn't say is that his own party is also a problem for the opposition alliance. Svoboda has joined the revolt, but it rejects certain human and minority rights.

With 10 percent support, Svoboda is the fourth-strongest group in parliament. Klitschko and the Tymoshenko party need its backing. Plus, the party is a key player in the protests. But Klitschko plays down Svoboda's right-wing stance. "We have different ideologies, but two things connect us," Klitschko says. "We are fighting against those in power today and we want European values for our country."

Flirting with the Right Wing

The Svoboda party also has excellent ties to Europe, but they are different from the ones that Klischko might prefer. It is allied with France's right-wing Front National and with the Italian neo-fascist group Fiamma Tricolore. But when it comes to the oppression of homosexuality, representative Myroshnychenko is very close to Russian President Vladimir Putin, even if he does all he can to counter Moscow's influence in his country.

"The EU is the only possibility for us to defend ourselves against Russian pressure," he says. He and his party see the alliance with Klitschko as being purely tactical. Klitschko, after all, would like to limit the powers of the president while Svoboda dreams of a country with a strong leader.

Myroshnychenko was press spokesman for the Ukrainian national football team in the lead up to the 2008 European Championships, but he isn't exactly cosmopolitan. He would even like to see foreign professional football players deported because they "change Ukraine's ethnic map."

There have been other, similar incidents. In a 2012 debate over the Ukrainian-born American actress Mila Kunis, he said that she wasn't Ukrainian, rather she was a "Jewess." Indeed, anti-Semitism is part of the extremist party's platform; until 2004, they called themselves the Social-National Party of Ukraine in an intentional reference to Adolf Hitler's National Socialist party. Just last summer, a prominent leader of party youth was distributing texts from Nazi propaganda head Joseph Goebbels translated into Ukrainian.

Without the nationalists' tight organization, the revolt on Maidan Square would long since have collapsed. But Svoboda also embodies the greatest danger to the protest movement. The party's foot soldiers, with their muddled, right wing doctrine, aren't likely to hold back for much longer.

And that might be what the president is waiting for.