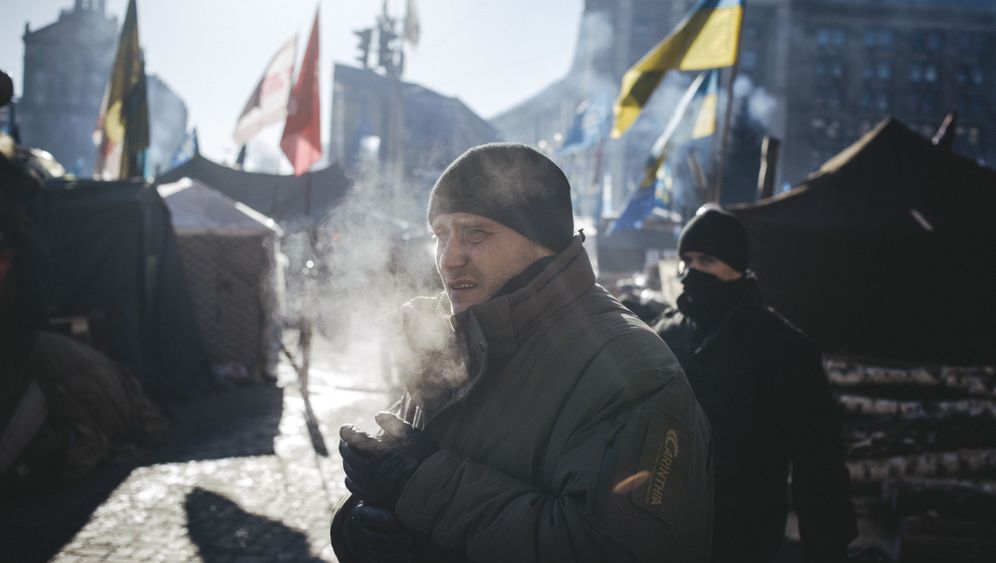 On the outskirts of Kiev, men lay on the ground, rifles at the ready. For the moment, they're firing at cardboard, but soon the targets could include Russian soldiers or eastern Ukrainian separatists. The black-red banners of Ukrainian nationalists flap above them -- among the trees of the derelict troop training area where Soviets once learned how to shoot.

Ready, aim, "breathe deeply and think before you fire," yells Mykola Ishenko, 48. Two decades ago, he was a drill sergeant in the Ukrainian army. Now he's stuffed himself back into a uniform and wants to make the transition from civilian to fighter. They exercise, throw knives, engage in hand-to-hand combat. Due to a lack of sandbags, they kick and punch logs.

Their unit is called the group of "Three Hundreds," and it is comprised of dozens of civilian defense leagues that were formed during the insurgency on the Maidan, Kiev's Independence Square. Their ideal is that of the national partisan and they have organized in order to defend the Ukrainian state. They include cosmopolitan, Western-oriented students, but also hard-boiled right-wing extremists who view the toppling of President Viktor Yanukovych as only the first step of a "national revolution." Many Maidan activists have been showing up at the military training camp since Russia's annexation of Crimea, with around 50 men turning up at the site in Kiev each day.

Trainer Ishenko has been here for two weeks now, but he also served guard duty during the Maidan protests. He says he has nothing against the Russians -- on the contrary, he even earns money from them. He works as a tour guide, and many of his customers are Russian visitors. At the same time, Ishenko says he's a Ukrainian patriot and that he considers Russian President Vladimir Putin to be an aggressive dictator.

The fact that Ishenko is now training partisans is the source of conflict with his mother. She spent the majority of her life in the Soviet Union. If the Russians really do send soldiers into Ukraine, she says they should be given flowers. Her son would prefer to point a gun at them.

In terms of their numbers, right-wing groups were only a minority during the Maidan protests, but they formed the backbone of the revolt against the Yanukovych government. When initially peaceful protests turned violent, it was right-wing groups who defended the barricades, threw Molotov cocktails and carried firearms.

Russian propaganda tends to describe these groups, in blanket terms, as "fascists." But the right-wing camp is anything but homogenous. In the western part of the country, there are three different factions. There are the civilian patriots like Ishenko, who view it as their duty to fight for their country. There are revanchist anarchists who want to challenge corrupt state authorities. And there are right-wing radicals of the ideological and dangerous variety who want to take advantage of the current vacuum to rise to power themselves. They are supporters of a totalitarian ethno-nationalism with anti-Semitic overtones.

The Right Sector, one of the most important groups on the Maidan, is among the latter. At its core are followers who are clearly right-wing extremists, but it has also since become a rallying point for the discontented.

Alexander Kolokolov, 37, is another ethnic Russian who identifies as a Ukrainian national. He recently joined the Right Sector. Kolokolov lives in Kherson, a city that is a 12-hour train ride from Kiev and is located near Crimea. At first, many believed that Kherson would also be annexed by Russia. Most people here speak Russian in their daily lives. But the annexation of Crimea instead strengthened the position of Ukrainian nationalists here. They toppled the city's statue of Lenin and replaced it with a memorial to the "Heavenly Hundred," as the Ukrainians have named the more than 100 people killed during recent protests on the Maidan. After the Russians marched into Crimea, people here began wearing blue and yellow armbands as a token of their allegiance to Ukraine.

Kolokolov used to be a criminal investigator, but he says he got fed up at some point with the sleaze and corruption. He quit and is now hunting down criminals together with his fellow members of the Right Sector. The change they hoped would come through the coup failed to materialize and they feel there are too few fresh faces in the new government. Now they now want to take responsibility for public order into their own hands.

Their greatest opponent is Colonel Mikhail Fabrin, the head of the security forces in Kherson. He's only been in office for a few weeks now, but his nomination for the post was pushed through by the party of world champion boxer Vitali Klitschko. Kolokolov doesn't trust the colonel because Fabrin was previously stationed in Crimea and ran in the 2010 regional parliament election as a candidate for, of all things, the Russian Unity party of the new Crimean president, Sergey Aksyonov.

The local chapter of Right Sector has moved into a musty office in Kherson's city center between a copy shop and a beauty salon. It also serves as the precinct for Kolokolov's guards, who act as a police-like citizens' watch. They fan out at night to shut down gambling houses and patrol the streets. They've already closed down an illegal gas station where Kolokolov claims corrupt police had been selling gasoline they had seized.

The colonel wasn't happy about those developments. His officials raided the Right Sector office and searched for weapons, but they didn't find any. Kolokolov says they didn't find the pistol that had been hidden in the printer either. Other than that, he says, the vigilantes are unarmed.

The local boss has just found out about an imminent shipment of drugs in Kherson and his men want to catch the dealer. To prepare themselves mentally, they play music videos on a computer. In it, imaginary figures fight a giant eagle with Molotov cocktails, the heraldic animal of Ukraine's notorious Berkut special police force. The music featured in the video is a favorite of the right-wing scene, complete with the refrain: "Warriors of light, warriors of good." That's also how they view themselves.

Some of the militias from Maidan are now acting like criminal gangs; many of them are loose -- and violence-prone -- groups of nationalists, though not as ideological as the Right Sector. Just last week, masked militiamen attacked a cement factory after being paid to do so by businessmen interested in taking over the company that owns it. There have been other reports of similar incidents, such as an assault on a vodka distillery.

The man who the Kherson militia would like to see become president of Ukraine can be found in a former industrial quarter of Kiev -- he lives on Moscow Prospect, a somewhat ironic address for a nationalist. The 42-year-old Dmytro Yarosh founded a martial sports group in the 1990s which went on to spawn the Right Sector. In the past, he preferred to make public appearances in military uniform, but he receives us in jeans and a dark, turtleneck sweater. Yarosh, after all, has lofty ambitions. He has registered as a candidate for the May presidential elections and is lobbying for the Right Sector to be recognized as a party. He says that his movement has over 10,000 members and hopes that the current wave of nationalism will be enough to propel him to the presidency.

When Yarosh spoke on the Maidan, he was received with more cheers than his rival Yulia Tymoshenko, partly because his men impressed Ukrainians with their discipline and stamina during the uprising. Even a classified document from Russian security authorities notes, not without admiration, that the Right Sector is "the only organized power" and that it attracts "like a magnet" both extremists and the general populace.

For years, Yarosh has been fighting for the "de-Russification" of Ukraine and has produced manifestos calling for the "spread of the nationalist ideology across the entire territory of our state." Today, Yarosh denies that anti-Semitism is part of that ideology. But in a book, he has written: "I wonder how it came to pass that most of the billionaires in Ukraine are Jews?"

He believes that "anti-Christian" powers are afoot in the European Union and that Brussels forces people into lifestyles such as gay marriage. It is, he says, "a variety of totalitarianism." He doesn't see Europe or NATO as a potential partner and believes the US is also part of an "anti-Ukrainian front." Yarosh studied linguistics, and he is almost eloquent as he explains that a Kalashnikov can be a Ukrainian's only reliable ally.

The Right Sector is in favor of legalizing gun ownership in order to develop a "country of free, armed men." That, he adds, "is the only way we can defend ourselves from state capriciousness and against Russia." Yarosh's words are a threat, and not just against Moscow. More than anything, his target is the Kiev establishment. He closes with the statement: "Our revolution is not yet complete."