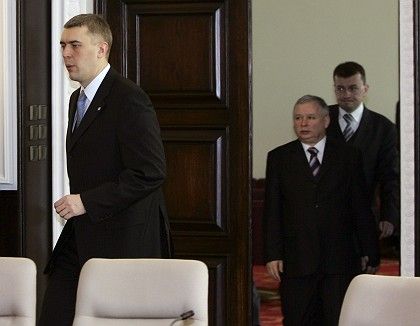 The Giertych family has leaned to the right for generations. Grandfather Jedrzej wanted a Poland without Jews in the 1930s. His son Maciej is fond of railing against Germany's alleged European hegemony in the European Parliament -- and the president of the lawmaking body on Wednesday publicly reprimanded him for publishing an anti-Semitic brochure.

And his son Roman has a problem with gays and Muslims. The 36-year-old recently offered a taste of his worldview in Heidelberg. Poland wants a categorical "ban on abortion and homosexual propaganda" in the EU, he said. And his rant didn't stop there: "A continent that kills its own children will be settled by those who don't kill" -- such as the "representatives of the Islamic world."

Like many in his family, Giertych is not just a private citizen giving voice to his personal worldview. He's the leader of the nationalist-Catholic League of Polish Families (LPR). He is also Poland's Education Minister. The week before last, Giertych did not spare his European counterparts at a meeting of EU education ministers hosted by German Education Minister Annette Schavan. They were shocked by his homophobic propaganda.

As soon as he returned to Poland, Giertych was immediately summoned by Prime Minister Jaroslaw Kaczynski: "I told him off," he claimed. He added that, while he is also opposed to abortion and homosexuality, Giertych had "damaged Poland's interests" by his ill-considered statements abroad.

Diplomats in many European capitals were puzzled by the reprimand. Since when, they wondered, does Kaczynski care about the impression his administration makes on foreigners? Warsaw even seems to be making an effort to improve its difficult relationship to Germany.

Former German President Richard von Weizsäcker was treated with generous hospitality during his recent visit to Poland. The visit, said Polish President Lech Kaczynski, was a splendid preamble to his meeting with German Chancellor Angela Merkel, which begins Friday with a visit to the Hel Peninsula, north of Gdansk. "We agree that we both cherish the idea of Europe," Kaczynski said.

But what are the pleasant words from Warsaw really worth? Nervousness and tension characterize the relationship between Germany and Poland. One of Angela Merkel's main goals during her visit to the presidential dacha by the Baltic Sea will be to learn more about Poland's position on the European constitution. Her advisers take a pessimistic view of the chances for rapprochement.

Indeed on Thursday, Mariusz Muszynski, the Polish advisor responsible for Polish-German relations, did little to offset such negativity. In the Thursday issued of the Berliner Zeitung, Muszynski says Warsaw "has to deal with a German partner which is nationalist, egocentric and thus not exactly friendly toward Poland."

Still, Piotr Buras, a Krakow-based expert on Germany, last week took a carefully optimistic view. "The Polish government seems to have realized its statements so far have isolated it within the EU," Buras says. But he also cautions it may be too early to expect a new and cooperative Poland. The Kaczynski brothers haven't changed their view of Germany overnight, he insists. At best, they've added an element of grace to their foreign policy.

Both brothers continue to believe Poland has handled Germany too timidly in the past. A "diplomacy of weakness," they call it. The most immediate result is that the post-1989 relationship between Germany and Poland has never been as bad as it has since the Kaczynski twins came to power.

Even Gesine Schwan, Germany's coordinator for relations with Poland and a person whose very office requires her to empathize with Germany's eastern neighbor, seems to be giving up. "At the moment, it's difficult to say to what extent the current Polish government is capable of a reliable policy towards Germany," she says. A German diplomat is even blunter. "We have to be patient and keep talking -- even if there really isn't any point any more," the diplomat said.

The most recent example of Polish waywardness is Warsaw's approval of US missile defense facilities being set up in Poland -- an approval that was given without any prior consultation with Berlin. Germans are also concerned with Poland's position when it comes to energy policy. Poland is loudly complaining about the construction of a German-Russian oil pipeline under the Baltic Sea, saying it means continued Polish dependence on Moscow. But Berlin's offer of providing the Polish market with fuel from Germany was ignored. 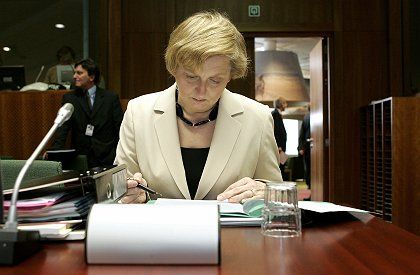 "They have to start behaving consistently," an annoyed German Foreign Minister Frank-Walter Steinmeier remarked recently during a closed-door meeting. Steinmeier said it was not a matter of "Poland's relationship with Russia" but one of minor policy questions -- about access to gas reservoirs in Germany, for example.

Steinmeier recently found out for himself just how difficult it can be to deal with Poland -- and that politeness in personal encounters doesn't translate politically.

Polish politeness not to be trusted

His visit to Warsaw at the end of January was characterized by an unusually friendly atmosphere. Steinmeier's host, Polish Foreign Minister Anna Fotyga, publicly called him "dear Frank."

Then the first warning shot was fired. Fotyga explained, during a press conference with Steinmeier, that Germany would cover costs that might arise from compensation claims by Germans displaced from Poland at the end of World War II. Steinmeier had never made such a promise. In order to preserve at least a semblance of harmony, he didn't protest, even though he had just told Fotyga the exact opposite of what she was attributing to him.

The next blow wasn't long in coming. Two days after her German colleague had left, Fotyga complained, in an interview given to the conservative German daily Frankfurter Allgemeine Zeitung, about an "assimilation policy" allegedly pursued by Berlin towards Poles living in Germany. Fotyga claimed that, in Germany, Polish parents from Polish-German marriages are sometimes prohibited from speaking Polish with their children.

Fotyga insisted the situation of Poles was nowhere "as difficult as it is in Germany" and added threateningly: "The ghosts of our burdensome history are easily summoned." Steinmeier was horrified, since this issue too had been discussed very differently during his conversation with Fotyga.

The visit and its aftermath make it clear that, at least for the foreseeable future, Warsaw will remain a maverick element and a source of uncertainty in relations among EU countries.

Diplomacy has not, until now, been the preferred political instrument of the Kaczynski twins. The two chose instead to evoke a sense of hostile forces working against Poland.

The president of Germany's Federation of Expellees, Erika Steinbach, has become public enemy number one in Poland. And the resolute member of the Christian Democrat Party (CDU) in the Bundestag isn't holding back either. Last week, she likened Poland's governing parties to far-right parties in Germany, such as the neo-Nazi parties NPD and DVU. Which is a bit unfair. The Law and Justice Party (PIS), to which the Kaczynski twins belong, is certainly nationalist and conservative, but in no way can it be compared to anti-Semites and neo-Nazis.

It may be a good sign, however, that the shrill protestations from Poland one normally hears after such comments were avoided this time. Merkel's visit to Warsaw this week will show whether the administration in Warsaw has really begun to rethink its policies and its diplomacy.

One of the difficult issues is sure to be the European constitution. Ever since the referenda on the EU constitution failed in the Netherlands and France two years ago, the document has been sitting on the shelf. As current EU president, Merkel wants to restart the ratification process immediately after the May presidential elections in France.

It will be a diplomatic balancing act. Not only does Germany have to present a proposal that takes into account the nay votes in two EU countries, but the reservations voiced by the Czech Republic, the United Kingdom and Poland likewise need to be considered.

Merkel has already spoken to government leaders in Paris, The Hague, Prague and London. She knows British politicians essentially consider the last version of the constitution a waste of paper but don't want to take too strong a stand. She suspects France's socialist presidential candidate Segolène Royal may be more difficult to deal with than her conservative rival Nicolas Sarkozy. And she suspects the Czech Republic won't protest a new draft on its own, its euro-skepticism notwithstanding.

Optimists hope the Polish population's fundamental sympathy for Europe will eventually tip the balance. "Approval of the EU and the constitution is greater in Poland than in any other member country," says Norbert Lammert, President of the German Bundestag, who has been struggling to improve communication between Germany and Poland for some time. "In the long run, the Polish government will have to take account of that," Lammert adds.

But only in the long run, the pessimists reply.