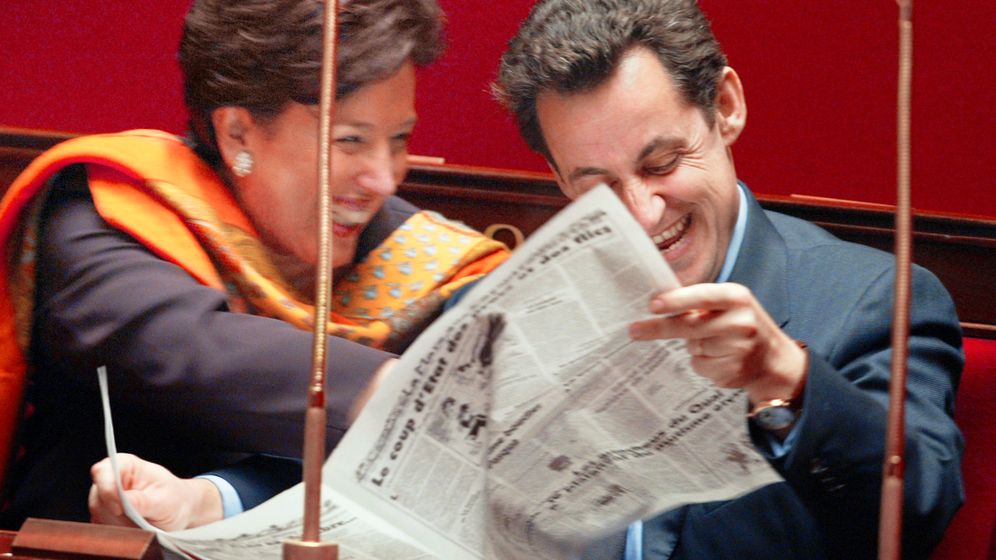 Editor-in-chief Claude Angeli holds up a small piece of paper: the balance sheet of an over-the-hill republic on a 10x10 centimeter sheet of graph paper. On the left side of the note are the names of six ministers and state secretaries whose lives Le Canard enchaîné made difficult last year. On the right side are the scandals the weekly newspaper exposed in 2010, a year in which Canard brought down two state secretaries and sealed the fates of two cabinet ministers. Following the newspaper's revelations of the last weeks, Foreign Minister Michèle Alliot-Marie was also forced to step down.

"France is doing poorly," says Angeli, "very poorly. It is a weak, limp society that responds too limply to the excesses of politicians." According to Angeli, the people in power have become arrogant, coarse and crude since President Nicolas Sarkozy came into office in May 2007. It isn't a country to be proud of, says Angeli.

And, he predicts, it won't be getting any better. Marine Le Pen, of the extreme right-wing party Front National, stands at 20 percent in the polls and Sarkozy, he fears, will soon begin courting the far right ahead of the 2012 presidential election.

Canard, on the other hand, France's only satirical weekly newspaper, is doing well in this ailing country. Circulation went up by 32 percent in the first two years after Sarkozy's inauguration, and thanks the country's numerous scandals it now prints 700,000 copies per week. Net profit was roughly €5 million ($6.9 million) in 2009. For decades, the paper has covered France's scandals with credible and reliable reporting, while at the same time publishing decidedly malicious cartoons, tongue-in-cheek opinion pieces and fictitious columns by politicians. 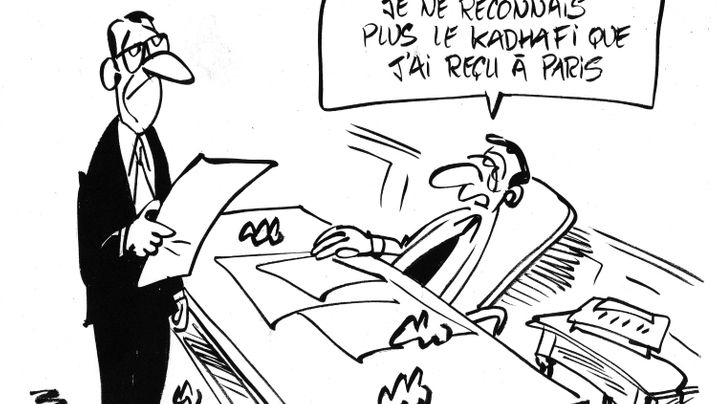 The Sarkozy years have been good to the paper -- and not because of the country's beautiful first lady, Carla Bruni, who promptly received her very own column, "Le Journal de Carla B." (The Diary of Carla B.), in which a fictitious Bruni writes about her husband, the president. "Chouchou informs me that from now on we must set an example and spend our vacations in France," the column recently read. "No more escapades to New York? That's horrible! I didn't get married for this!"

Chouchou's government has also dropped a series of appealing scandals in Canard's lap. In one case, a state secretary spent €12,000 of French taxpayer money on cigars. Another state secretary used fake measurements and the help of a fellow party member to secure a construction permit for his vacation house in St. Tropez.

A journalist for Canard photographed the property, checked the floor plan and square footage and spent two weeks sifting through documents at the local land registry office. The resulting exposé led to the state secretary's resignation -- a rarity in France, a country where the press has long cultivated an unhealthy proximity to the powerful.

It is also a country in which the largest private television network, TF1, belongs to a friend of the president and the government television network, France 2, has to fear for its existence when its reporting is overly critical. The large daily newspapers have been losing influence for years. The ailing Le Monde, for example, has seen its circulation steadily decline, while the once combatively leftist Libération barely manages to publish 120,000 copies a day. Le Figaro, the third national daily newspaper of any significance, is owned by industrialist Serge Dassault, a close friend of Sarkozy.

Le Canard enchaîné, established in 1915 as a journalistic counterweight to phony propaganda and censorship in World War I, belongs to no one but the editors who work there. They own the shares in the paper, they are the guarantors of its success and they are fighting for a different France -- and are paid more to do so than other journalists in the country.

Canard is rich, boundlessly rich for such a crisis-ridden industry. The paper's cash reserves and property holdings are worth €110 million. Its editorial operations are not very expensive, nor is the production of the paper itself -- eight pages of two-color newsprint each week. The paper owns two buildings in locations Paris real estate agents can only dream of: one at the Palais Royal and another near the Place des Victoires.

Editor-in-chief Angeli is wearing Levis, a blue-and-white plaid Ralph Lauren shirt and dark leather loafers. He turns 80 this July, and in May he will have been with Canard for 40 years. He looks young for his age -- and for someone who has been at the same publication for so long.

Angeli is responsible for a significant chapter in his country's journalistic history. In 1972, he published the tax returns of then Prime Minister Jacques Chaban-Delmas, which showed that the man had paid almost no taxes at all for four years. The next year, agents with the domestic intelligence agency, disguised as plumbers, attempted to conceal microphones in the paper's new editorial offices -- and Canard had its own Watergate, the so-called "Plumbers' affair." Nine days later, Angeli published the agents' first and last names. Since then, everyone in Paris has known that this man has the best network of informants in France.

In 1979, he revealed that then President Valéry Giscard d'Estaing wasn't just fond of going elephant hunting with the Central African dictator Jean-Bédel Bokassa, but also accepted a gift of diamonds from him worth a million francs.

Despite his age, Angeli stays in the office on Tuesdays until the paper goes to press, and not in some editor-in-chief's suite but in an open office with five desks. Drawings by the paper's illustrators and cartoonists cover the walls. Angeli still coordinates reporting and chairs the editorial conferences, which are closed to outsiders. "It isn't for reasons of confidentiality," says Angeli. "You know, sometimes we just sit around looking stupid, look at each other and have nothing intelligent to say. We don't want anyone to see us like that."

Christmas with a Dictator

Understatement is Canard's biggest strength, aside from its independence. And the paper has never accepted advertising. "We never wanted to have to ask ourselves whether a particular story would lead to the loss of an advertising budget," says second-in-command Louis-Marie Horeau.

In its most recent revelation, the paper reported on how Michèle Alliot-Marie, foreign minister until recently, and her family had spent their Christmas holiday in Tunisia, traveling around the country on a private jet owned by a business acquaintance of dictator Zine El Abidine Ben Ali. Canard reported that Alliot-Marie had had lengthy, private telephone conversations with Ben Ali during the family vacation, before offering him police support and French tear gas to deal with the protests washing over his country upon returning to Paris.

The paper also caught the minister in a lie when it revealed that her parents had bought parts of a real estate company from the Ben Ali business associate during that Christmas holiday. A short time earlier, Alliot-Marie claimed that she had merely happened to run into the man at the airport. While her parents were signing the purchase agreement, the minister was at the hairdresser's getting her hair washed and blow-dried on the day before New Year's Eve. How did the paper get this information? It would never reveal its sources, says journalist Brigitte Rossigneux, but they are reliable.

At Canard's editorial offices, Rossigneux is also known as the woman with the two mobile phones: one that she uses for work and one that she buys for €39 every month, complete with a new SIM card, and then promptly throws away four weeks later. She gives the number to a few key informants, thereby evading the government's monitoring efforts.

For all its revelations, Canard is no modern exposé machine, no New York Times or Washington Post. Instead, it is the dream of a few men, now old men, from a different republic, and from the era of an independent press. A few young men and three women have joined the ranks over the years. "We are not very feminine," Angeli says curtly. The paper has only 16 political editors and reporters, not more.

Their offices seem stuck in time, as if frozen in the early 1970s. There are stacks of dossiers in pastel-colored folders on the desks, next to black telephones with giant buttons from the days before the invention of the display screen.

"Looks like a set from an old television crime show, doesn't it?" says Christopher Nobili, one of the younger editors. His personal achievement from the last year, he says, was a toppled state secretary -- such is the measure of success at Canard. Nobili is one of the few journalists at the paper who write on a computer. More than half of the editors turn over their handwritten manuscripts to the secretaries.

Canard is the functioning alternative to the networked rest of the world. The newspaper, so feared at the Elysée and the ministries, consistently refuses to create a website. "Our job is to inform our readers, on newspaper and with printer's ink," the one-page website reads defiantly. Canard also has no large teams of researchers who are assigned to work on stories for months.

In the best case, information reaches Le Canard enchaîné, or "The Chained Duck," entirely on its own. Over the years, the duck has thrown off its chains, and now it depends on a very French form of schizophrenia: informants in the ministries, intelligence services, the military and the Elysée Palace. Its sources are reliable whistle-blowers who submit to hierarchical conditions by day, keeping quiet and swallowing what they don't like, only to meet with the editors in the bars of major hotels in the evening ("very practical, lots of foreigners, very discreet") and reveal the secrets of the republic.

Such sources are the path by which direct quotes from cabinet meetings, and sometimes even classified government documents, find their way into the paper. Critics says that the editors depend too heavily on whistle-blowers and are susceptible to manipulation. Editor-in-chief Angeli says: "I have known many of my sources for years. We check every piece of information, and we only publish it if it is confirmed by two sources that are independent of one another. Unless it's a matter of who is sleeping with whom. We joke about that sort of thing in our conferences, but we don't write about it." The paper, which has never revealed a single source, hasn't lost a court battle for five years.

"Do you know what makes my life here so relaxed?" Angeli asks. "We are doing so well that we could skip an issue and still keep on paying everyone's salary."

Maybe this explains why the paper occasionally prints headlines like the one from last week: "Fourth Cabinet Meeting in One Year. Sarko Manic-Depressive Again." A very relaxed headline.