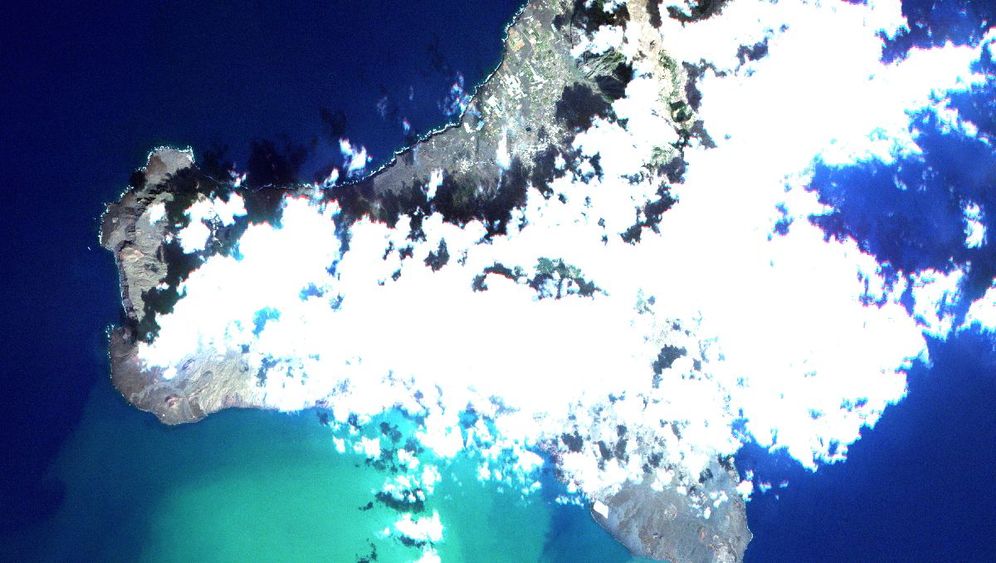 Photo Gallery: Could a New Canary Island Be in the Making?

It hasn't yet reached the surface, but residents of the Canary Islands have taken to the internet to suggest names for a potential new islet. There are already more than 500 suggestions. Favorites include "The Discovery," "Atlantis" and "The Best." Meanwhile Spanish newspapers are taking a different approach to the subject, debating who would take responsibility for the new territory.

It's an underwater volcano off the coast of El Hierro, the southern-most Canary Island, which has caught the imagination of locals. For three weeks it has been spewing magma into the sea in the first volcanic eruptions on the Canary Islands for 40 years. The lava is already towering 100 meters above the seabed -- another 150 meters and it will protrude above the Atlantic Ocean, creating a new island. For Canarians, it's a welcome new attraction.

Whether the eruption near the archipelago off the northwest coast of Africa will ever actually result in new land remains uncertain. But it's clear that the magma reservoir under El Hierro is simmering unchecked, constantly pouring out magma and causing the ground to shake several times a day. Since July, there have been more than 10,000 earthquakes -- mostly imperceptible -- on El Hierro. Volcanologists expect more eruptions, but they don't know where the lava will be released. Even small eruptions on land are possible. The volcanic activity will "probably last for some time," said the Mayor of El Hierro, Alpidio Armas.

The effects of the underwater volcanic events are clearly visible: powerful eddies result from explosions in the deep. A sea of ash bigger than El Hierro itself is floating off the island, with gas bubbling up and dead fish scattered in the water.

Politicians and scientists are offering daily advice on possible risks to the local population, but their understanding of events under the seabed is far from complete. "Recent volcanism in the Canary Islands is not well known," says a report in the "Natural Hazards and Earth System Sciences" journal by researchers at the Spanish National Research Council (CSIC) in Barcelona, led by Rosa Sobradelo. Nonetheless, advice on the potential dangers is being dispensed by the authorities on El Hierro as well as in the rest of the Canary Islands.

Scientists have stepped up their monitoring; there is even a submarine taking pictures of the ocean floor, showing the new undersea mountain, already 700 meters (2,300 feet) wide. A 150-meter (490-foot) crater can also be seen. There is also fissure three kilometers (two miles) long that is clearly gushing magma.

To the south of El Hierro, the earthquakes suggest persistent outbursts of lava, according to the ITER research institute on Tenerife. They show a pattern that is typical for flowing liquid, a so-called harmonic volcanic tremor. Presumably, there are constant small eruptions on the ocean floor. But the lava usually clogs the fissure quickly after such eruptions, forcing further magma to seek new channels -- exactly what seems to be happening now.

In recent days, however, some unsettling measurements have been recorded: The shaking has moved to the north. Because most of the earthquakes in that area have, up until now, occurred at depths of more than ten kilometers, an eruption is not expected in the area, the local authorities have said. The magma seems to be contained in the depths thus far.

If the lava was being spewed in shallower water, there would be a danger of large steam explosions, says to Ramon Ortiz, the science advisor to the local government. But there are no fears of large eruptions on land according to Spain's National Geographic Institute (IGN). The only risk is in the immediate vicinity of the eruption site, where there may be lava flows and rocks flung into the air. Still, many of the nearly 600 residents of the fishing village of La Restinga on the southern tip of the island have now returned home after being evacuated two weeks ago.

The risk of large, explosive eruptions in the Canary Islands, however, "should not be neglected," Sobradelo and her colleagues insist in their study. The frequency of their occurrence cannot currently be estimated. But even the most momentous outbursts of the past few centuries remained localised. In 1706, lava from the Pico del Teide volcano hit Tenerife, burying the port town of Garachio in the northwest of the island where massive black boulders now form the remnants of the lava flow. On Lanzarote, lava poured through villages in the north of the island from 1730 to 1740 and again in 1824. La Palma has experienced more than a hundred eruptions in the past 20,000 years; most recently in 1971 when a flow of lava ran into the sea.

El Hierro is the youngest of the Canary Islands, appearing above the surface of the sea just over a million years ago. As such, it is likely its magma reservoir may still be very large; geologists suspect it is around ten kilometers below the seabed -- most of the tremors have occurred at this depth. The last confirmed eruption was in 550 BC, although there are also disputable reports of an event in 1793.

In the eastern Canaries, on the other hand, supplies of lava have largely run out; they have already been far removed from the magma source. On Lanzarote and Gran Canaria, volcanic activity has already lasted 15 million years, on Fuerteventura 20 million. Although there has not been an eruption on Fuerteventura in the past 20,000 years, the volcano is still considered active -- unlike La Gomera, which seems to have run out of fresh magma. The island is expected to be spared from any future volcanic eruptions. It pays a price for this, however -- without any new lava, La Gomera will be washed away by rain and sea, and eventually, over the course of millions of years, will gradually sink back into the ocean.

Only fresh magma secures the existence of the Canaries; it was volcanic eruptions which allowed the islands to grow above the water in the first place. The sea is already at work trying to reclaim the land. Coastal roads have repeatedly had to be moved inland after being battered by floods. But the recent underwater lava eruptions could be creating new land near El Hierro, and residents are waiting eagerly to see if it will grow beyond the surface.

8 Bilder Photo Gallery: Could a New Canary Island Be in the Making?