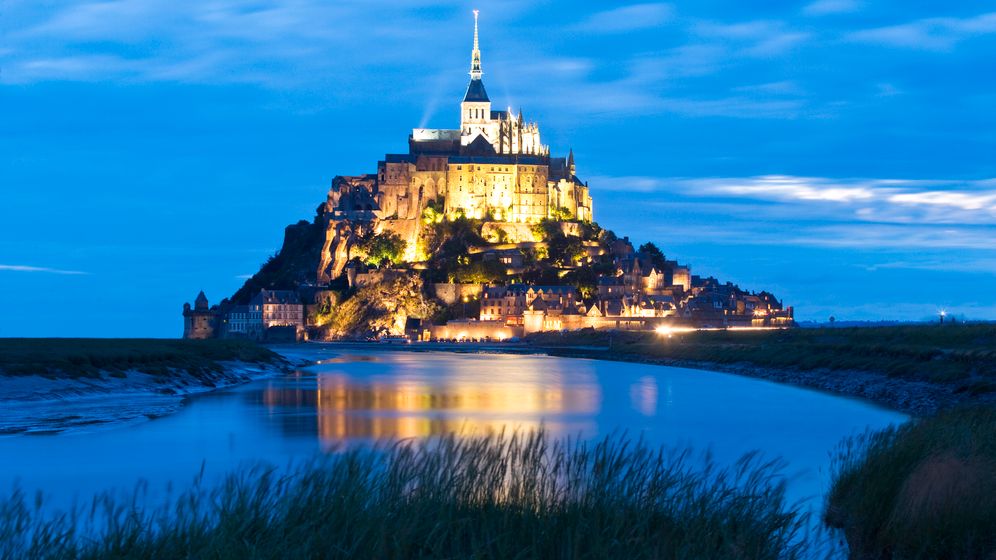 The silhouette adorns biscuit tins, aprons and coffee cups, and there is scarcely a travel guide for the northwestern French region of Brittany that doesn't feature the unmistakeable profile of the island and its 11th century Benedictine abbey on the front cover.

Mont-Saint-Michel, located in a bay between the coast of Brittany and the Contentin peninsula in Normandy, is a symbol for the entire region. It is cut off from land twice a day at high tide and is one of France's biggest tourist destinations, attracting 3 million visitors a year, tourists and pilgrims.

UNESCO, the United Nations' culture and education agency, designates this unique place as a World Heritage Site. Mont-Saint-Michel and the bay were included in the prestigious list of places of global special cultural and physical significance in 1979. The judges as the time lauded the "unprecedented union of the natural site and the architecture" and fated it as an "unequalled ensemble, as much because of the co-existence of the abbey and its fortified village with the confined limits of a small island, as for the originality of the placement of the buildings." Mont-Saint-Michel, they said, was one of the most important sites of medieval Christian civilization.

Ever since, the local authorities have striven to preserve the island and the abbey and even planned to demolish parts of the causeway and car and coach parks leading to the island.

But now the 'Wonder of the West' is at risk of losing its UNESCO status because of plans to build wind turbines close by. The UN culture and education agency has written to France asking it to explain the project, which would see three wind turbines erected 17 kilometers (10.5 miles) from the tiny seaside mount.

Local campaigners are outraged by the project. "Do we want a nightclub around Mont-Saint-Michel?" asked Jean-Louis Butré, president of the environment group Fédération Environement Durable (FED). "The wind turbines can be seen from 10 kilometers away," he told the Ouest-France newspaper. "Especially at night, when the lights blink." He said the project was being driven by "enormous pressure from industrialists -- the financial investments are huge."

He's probably right, too. French President Nicolas Sarkozy wants to put this nation of nuclear power at the forefront of wind power production. There are five concrete projects for wind turbines along the coast from the English Channel to the Atlantic, not including offshore sites already being planned.

"Our goal is to create a strong national industry to manufacture these products with the aim of exporting them," Sarkozy said at the end of January during a visit to the Atlantic port of Saint-Nazaire. The plan is to build some 600 turbines with a capacity of 300 megawatts in a first stage by 2015. That means investments totalling €10 billion (nearly $14 billion), which Sarkozy said would create 10,000 jobs.

Epuron, the company that plans to build the turbines around Mont-Saint-Michel, has said it will use relatively small ones "to take account of the special nature of the place and the relative proximity to Mont-Saint-Michel."

Local tourism, environmental and monument protection groups have mounted legal bids to stop the construction, but have failed. Their last hope is UNESCO.

UNESCO said it had received a response from the French government by the Feb. 1 date it had requested, and will now assess the impact on the site and decide what action to take.

The agency's inspectors aren't just concerned about Mont-Saint-Michel. The World Heritage status of three other French sites is also looking shaky: The port of Bordeaux, the grotto of Lascaux with its prehistoric cave paintings and the medieval town of Provins.

It is feasible that Mont-Saint-Michel could lose its cherished UNESCO status. "The World Heritage Committee can decide to delist it, but that's a last resort and no one really wants that," a UNESCO spokesperson told Reuters.

There are precedents. The Elbe Valley in Dresden was struck off the list in June 2009 after being blighted by a road bridge.

UNESCO inspectors might categorize the site as "endangered" when they next meet in early June. Even that would be an embarrassment for a cultural nation that has 35 sites on the World Heritage list, placing the nation at No. Five in the world ranking.