Suddenly, the connection breaks off. Nadim Shami* presses the telephone against his ear and cries: "Maryam! Can you hear me?" He calls the number of the smugglers, but nobody answers. Nadim Shami is sitting in a teahouse in the town of Antakya, on the Turkish-Syrian border, and taps his fingers on the table. He's waiting for a sign that his wife is still alive. Four hours earlier, Maryam Shami had set off from a refugee camp in northwestern Syria together with her two sons Yasin and Mohammed and her daughter Samira.* A migrant smuggler brought the family to the Turkish border, where Maryam Shami and her children hid in the bushes until darkness fell. The last words Nadim Shami heard from his wife on the telephone were: "We're heading out."

Nadim Shami, 28, used to work as a mechanic in the northwestern Syrian city of Idlib, but last summer, he fled the violence to Turkey hoping to find work and an apartment in Antakya before bringing his wife and children over to join him. He hadn't thought that Turkey would close off its border with Syria.

That too, though, has become a side effect of Angela Merkel's refugee policies. For months, the chancellor has faced rising pressure to reduce the number of people coming to Germany on the search for security and a bit of prosperity. Recently, in fact, speculation has been mounting in Berlin that Merkel may soon be forced out of office. Large numbers of conservative politicians -- both with Merkel's Christian Democratic Union (CDU) and its Bavarian sister party, the Christian Social Union -- have demanded that the chancellor close the German border to refugees. Merkel, though, has thus far refused, hoping instead for help from her European partners and, in particular, from Turkey.

The chancellor has one main goal she would like to achieve by the beginning of March: The number of refugees coming from Turkey to Greece should drop significantly. If that happens, Merkel is prepared to take in set quotas of refugees from Turkey -- even if not all EU member states agree to help.

Turkey has begun making efforts to combat the refugee crisis, but differently than Merkel had hoped. Rather that increasing patrols on the coast, where many refugees jump on boats heading for the nearby Greek islands, Ankara has closed the border to Syria.

The result is that precisely those Syrians for whom survival is the number one priority are being denied the necessary protection. The many other migrants, including those who have left their home countries or third countries primarily for economic reasons, can continue to enter Turkey and travel onwards to Europe. Merkel's Turkey strategy is thus in danger of two-fold failure: It could make it more difficult for Syrians to flee the Assad regime's barrel bombs while at the same time failing to prevent the continued arrival of migrants to Europe.

The European border control agency Frontex has its headquarters on the 11th floor of the Warsaw Spire, located in the heart of the Polish capital. On the computer screens in the "Situation Center," the fate of refugees in the Aegean are reduced to a row of green dots. Border officials can monitor the routes of individual boats and keep an eye on the situation on the EU's external border.

Frontex head Fabrice Leggeri believes that the refugee drama between Turkey and the European Union will continue. "Despite the bad weather, between 2,000 and 3,000 people are arriving in Greece each day," he says. Leggeri is of the opinion that Ankara needs to do more. "Turkey has to make it more difficult for the migrant smugglers," he says.

But is that possible? Since the EU-Turkey summit at the end of November, Turkish President Recep Tayyip Erdogan has sent more security personnel to the Aegean coast and increased the number of raids on migrant smugglers. In 2015, Turkish police arrested 341 smugglers, almost four times the number taken into custody in 2014. But Turkey's Aegean coast is around 2,800 kilometers (1,740 miles) long, making it a virtual impossibility to completely close it off to the smugglers.

"Who cares about the controls?" says Ibrahim Hamza.* The men in the lobby of Izmir's Palast Hotel laugh. It smells like sweat and cigarette smoke. Hamza swipes the display of his mobile phone and sees that Turkey's weather service forecasts a night without rain or wind. "In a few hours," says Hamza, "we'll start the next tour."

Hamza, 30, is a handyman from the southern Syria city of Daraa who now smuggles refugees from Izmir, located on Turkey's Aegean coast. The port town is a hub for migrants from around the world. Hamza is wearing a hoodie and a beard, and has a tattoo on his forearm. He once fought for the Free Syrian Army against the regime of Syrian dictator Bashar Assad, but two years ago, after his two brothers were killed in battle, he left Syria for Turkey.

Turkish government controls, Hamza says, haven't had much of an impact on his business. The smuggling ring that he works for, he says, has contacts within the police and government agencies. For each tour, Hamza pays €3,000 to the police so that his group can pass without being checked -- and he simply avoids the military posts on the coast. Since January, the smugglers have preferred new, more remote routes, to the sea. Once the refugees have reached the coast, it's too late: It takes but a few minutes to inflate the rafts. "We will always find a way to smuggle refugees to Europe," says Hamza.

The problem for Merkel, however, is not only to be found on the long, difficult-to-monitor coastline. In recent months, an increasing number of North Africans have been coming to Germany via Turkey. Whereas around 100 Moroccans reached Greece last September, for example, by December the number had risen to 2,800. The same trend can likewise be seen with the Algerians. Citizens of Maghreb states don't need a visa to travel to Turkey and simply fly to Istanbul. Indeed, one of the primary beneficiaries of the trend is the partially state-owned Turkish Airlines.

Refugees from Afghanistan, who now make up 20 percent of those arriving in Greece, represent a completely different problem. They arrive to Turkey by land, particularly from Iran, where around 2 million Afghans have fled. Officially, they need a visa to enter Turkey, but the mountainous border region is poorly monitored. Furthermore, it is part of the Kurdish areas, where the Turkish army is doing battle with the Kurdish rebel group PKK.

Officials in Berlin and Brussels are concerned that Turkey's military operation in the southeast is taking away financial and personnel resources that could otherwise be used to combat migrant smuggling on its west coast. But there are no indications that fighting with the Kurdish rebels will subside anytime soon. Turkish Prime Minister Ahmet Davutoglu made it clear during his recent visit to Berlin that President Erdogan has no interest in de-escalation. On the contrary: Erdogan has announced his intention to "annihilate" the separatists.

That puts Merkel in the uncomfortable position of being dependent on a man who is not only leading a brutal war against the Kurds, but who is also systematically eroding press freedoms. During talks a week ago Friday, Merkel requested that Turkey finally fulfill its part of the agreement regarding the reduction of refugee numbers. Time is of the essence, Merkel said, with an eye to the growing resistance to her policies. It sounded almost imploring. Davutoglu responded pleasantly that he reads the German papers every day and is aware of the domestic political situation in Germany. But he made no concessions.

Ankara, in fact, has discovered the migrant issue as a lever in dealings with Merkel and the EU. In addition to financial assistance, Erdogan would like to force the Europeans into concessions when it comes to his country's EU accession negotiations.

'We Shouldn't Expect Any Miracles'

Yet even if such concessions were made, it doesn't change the fact that Turkey has little interest in having the refugees remain in their country in the long term. "We shouldn't expect any miracles from Ankara," says one German diplomat.

At the same time, it's also not as if Turkey has done nothing. Since the beginning of the year, Syrian refugees have had the right to work legally in the country. Plus, Ankara introduced a requirement on Jan. 8 that Syrians coming from third states such as Jordan or Lebanon must have a visa to enter Turkey. From one day to the next, the German Embassy in Beirut cabled to Berlin, the number of flights from Beirut to Istanbul plunged from 25 to fewer than 10. Whereas 41,000 Syrians traveled to Turkey in the first week after the introduction of the visa requirement, in the second week, the number had fallen to 1,000.

Indeed, there have been positive steps, says EU Enlargement Commissioner Johannes Hahn, who was just recently in Turkey. "But we have made extremely clear that the EU expects very rapid and very involved actions by Turkey when it comes to the reduction of the refugee numbers: better controls on entry and exit, further steps on the visa front and last but not least, fighting the smugglers."

But the visa requirement has negative consequences as well. Because only very few Syrians receive a visa, the majority of refugees are now forced to enter Turkey by land. That, though, is becoming increasingly difficult. Turkey is extending its border wall with Syria by the day. Ankara has said that the border will remain open to Syrian refugees, but the official border crossings have been de facto closed. Refugees instead use alternative routes through the forests.

Nadim Shami says his wife has been stopped twice by Turkish soldiers during attempts to cross the border and sent back into Syria. Many refugees that SPIEGEL has spoken with report similar experiences: They claim to have been taken into custody by Turkish security forces and deported to Syria. Some say they suffered abuse.

Trying Again the Next Day

An engineering student from Deir-al-Zor in eastern Syria says he was locked up for two days in a military barracks near the Turkish border city of Reyhanli and claims he was given nothing to eat or drink during the ordeal. Instead, Turkish soldiers beat him, robbed him and finally put him on a bus with other refugees back across the border to Syria, he reports.

International law forbids the deportation of people into countries suffering from civil war if their lives may be at risk. In December, Amnesty International documented 130 cases of illegal deportations of refugees from Turkey to Syria and Iraq. The victims, according to Amnesty, were held in Turkish prisons for several weeks until they agreed to leave the country. Turkey has denied the accusations.

In the Antakya teahouse, Nadim Shamit buries his face in his hands. He hasn't slept for days and is consumed by self-doubt. Why did he leave for Turkey? Why did he leave his family behind? Late that night, he gets a call from his wife Maryam. She and the kids had to turn back at the Turkish border because of a storm. They plan to try again the next day.

* Names have been changed. 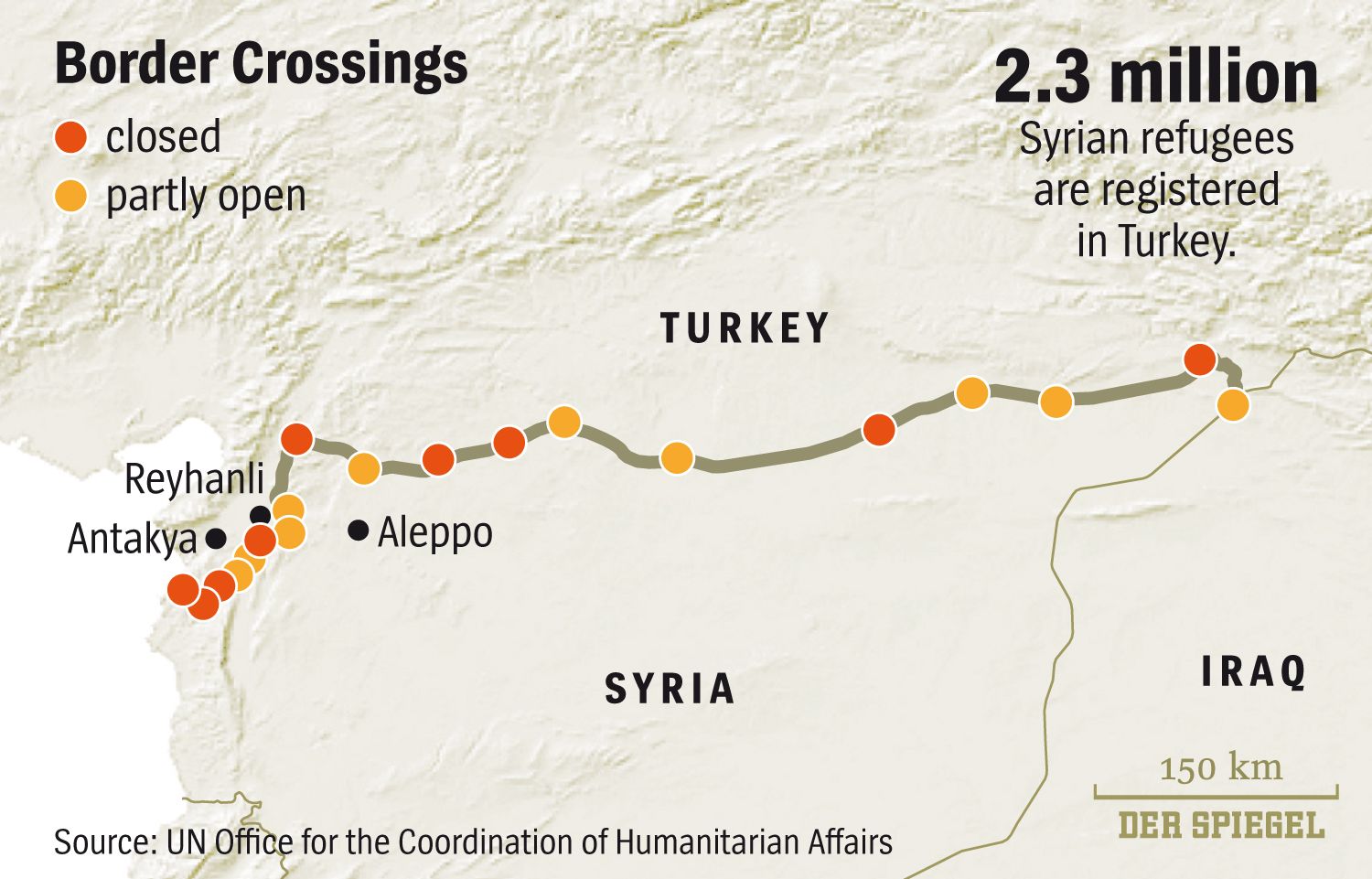 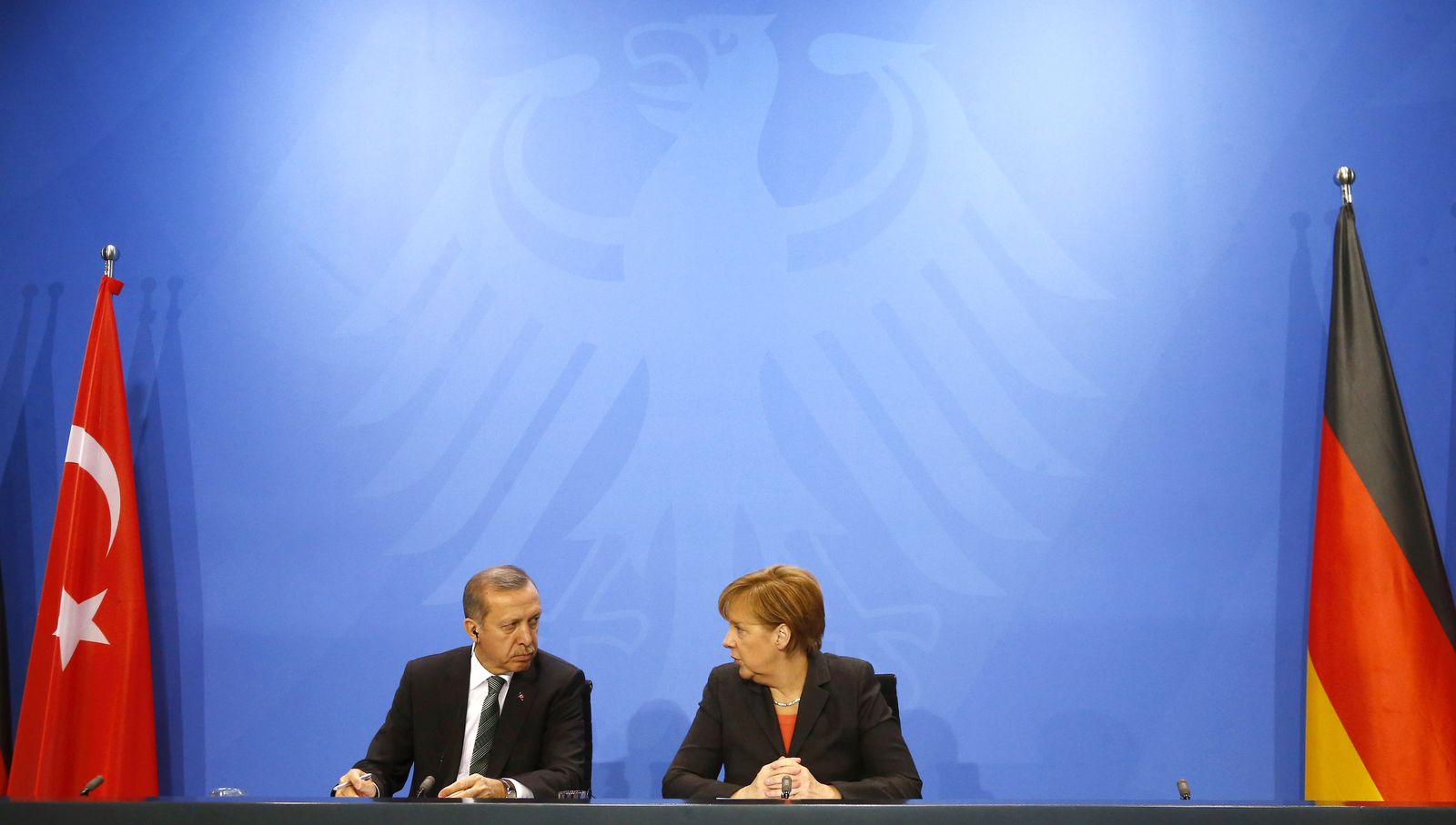