Europe seems to have come up with a narrative about the United Kingdom: The British are losing their minds. An otherwise extremely rational people, according to this oft-repeated tale, succumbed to a fit of irrationality in listening to populist clowns and turning their backs on the European Union. All that's left to us is to prevent the virus from jumping the Channel and infecting the Continent.

Europe had long viewed the UK as a rather eccentric, but nevertheless pragmatic and open neighbor, one less interested in political ideology than in free markets. A nation of commerce whose colonial history has made it familiar with the world at large, a nation that has shaped pop-culture with exports from the Beatles to Adele. Cool Britannia. In recent years, however, the European view of the country has become more distrustful, more skeptical.

First came the financial crash of 2008, after which the UK slipped into the worst economic crisis in decades. Then came the Scotland referendum two years ago, which came within a hair of breaking apart the UK. Parliament also long refused to approve military deployment in Syria, and even during the Ukraine conflict, the British remained quiet. While the British government sent money to Syrian refugees, it simultaneously fortified its borders. The former world power had seemingly withdrawn from the world at large and become even more eccentric. And then came Brexit.

Prior to the referendum, I had begun a trip across the island to better understand this country and to write a book. The journey was to take half a year. The British have become foreign to us, making it all the more important to find out what drives them and, now, to find out how the Brexit catastrophe could have happened and what will happen next.

The simple answer, after speaking to pawnbrokers in Blackpool, unemployed miners in Wakefield and many others, is this: Many in Britain are concerned about the same things many Europeans are. They are disappointed by Europe, angry at the elites, disgusted with politicians who promise wealth and then cut pensions and social services. Populists aren't unique to the Britain, of course, but they unfortunately happen to be better organized here.

The more complicated answer is this: Fault lines have appeared in British society that are larger and more extreme than elsewhere. The gap between the rich and poor is greater here than in almost any other country in the EU and nowhere else do billionaires and the destitute live so closely together. The per capita gross domestic product of London is 186 percent of the EU average, and yet several of the city's neighborhoods are among the poorest in the country. In parts of Wales, some people earn less than people in Sicily. Lots of societies are splintered, and the UK has never been an exception, but these gaps have now become virtually unbridgeable. Matters have been made worse by the blow the economic crisis dealt to a the self-confidence of a country that defines itself through its thriving trade, economic strength, diversity and global influence.

Many Brits no longer feel represented by the parliament in Westminster and have become cynical about the London political, media and banking elites. Last year, 4 million people voted for UKIP, the right-wing populist party. But because the UK uses a first-past-the-post system, which works to the disadvantage of small parties, UKIP only has one representative in parliament. That may have a practical advantage, but it's not a great selling point for democracy and the big parties are feeling the repercussions.

Labour and the Conservatives have always positioned themselves in accordance with the country's social divisions: Labour for the workers, Tories for the businesspeople. The EU referendum confirmed that this logic no longer applies. Labour has largely split in two: an urban left-wing liberal middle class that voted against Brexit on the one hand and an independent worker class that was in favor of leaving the EU on the other. The Tories, meanwhile, is made up of nationally patriotic EU opponents as well as business-oriented globalists.

British society has become more complex, but its political system doesn't reflect that. The working class of Charles Dickens novels and George Orwell essays has disappeared. Sociologists now divide them into "prosperous workers," the "technological middle class," and "up-and-coming service-sector workers." The steel factories, mines and shipyards that provided millions of families with their identities and daily bread are dead. The forces that tie together the "working class" have weakened.

It wasn't that long ago that England was the roaring, groaning workshop of Europe. Coal played an important role in the rise of the empire and in industrialization. During the 1980s, coal fueled the conflict between the country's miners and the government of Prime Minister Margaret Thatcher. The strikes, the extended protests, the clash between the workers and the state -- all that is deeply burned into the collective consciousness.

Coal united the country and tore it in two. When the mining industry slowly died, it spurred a phantom pain that can still be felt today. The country's last coal mine closed just before Christmas of last year in Knottingley, near Leeds. An ex-miner who worked in the mines for 47 years told me he was sad that so many of his friends were losing their jobs. Even sadder, he said, was the fact that he was being prevented from finishing the job of extracting all of the region's coal.

The white working class feels abandoned: Its older members, who have no sense of direction in the globalized, multicultural UK, and its younger ones, because they feel like they've been denied a future. New forms of exploitation have emerged: temporary contracts, precarious positions as drivers or messengers on the darker end of the "sharing economy." Many of these jobs are hollow and unsatisfying. "This new work doesn't do what the old work did: it doesn't offer a sense of identity or community or self-worth," London author John Lanchester wrote recently in the London Review of Books.

Since the financial crisis, the most common sentiment has been bafflement, incomprehension, disorientation. The phrase one hears most often is: "Something here is going wrong." In that sense, the Brexit camp's promise to "take back control" was as strategically adroit as it was dishonest.

The nation I encountered during my travels was hungry for freedom but unsure where to find it. For decades, the UK has been measuring itself against its past, and the saying by former US Secretary of State Dean Acheson from 1962 still applies: "Great Britain has lost an empire and has not yet found a new role."

During the Brexit campaign, tragedy and farce overlapped in a way that's only possible in the land of Shakespeare. The strangest part, though, was how obvious it all became: Rarely had so many people lied so much, rarely so many untruths been unmasked. It was as if it was all a vast irony, a wink, a game without consequences played by Eton alumni.

Half of the UK is run by Old Etonians, including law firms, banks and government ministries. The search for why the establishment is behaving so egocentrically and recklessly necessarily leads to the boy's boarding school in the shadow of Windsor Castle. Prime Minister Theresa May, daughter of a vicar from the southern English countryside, may distance herself from the privileged class, but that doesn't mean its influence is disappearing. Another Eton graduate, Boris Johnson, is the government's foreign secretary.

The British elite is different from the leadership classes in other countries in that it has largely been left alone. For centuries, there have been no violent uprisings against the elite of the kind seen in France and Germany. And in Britain, the elite continues to recruit from just a few institutions, including Eton and the universites of Oxford and Cambridge.

Although only 7 percent of the population attended a private school, almost one third of the lawmakers in parliament and more than half of the country's leading journalists were brought up in private educational institutions. Among military leaders and in the judiciary, it's three-quarters.

Those who aren't members of this club are forced to struggle, and for many, it is a struggle that confirms their feeling that they're living in an economic system and not in a political system. For those who grow up in South Wales or the northwest of England, the UK is a gray, hyper-capitalist oligarchy in which anyone with lots of money or a famous last name can rise up the ladder. Cold Britannia.

Democracy works better when the economy is growing, which is why the Tories are trying to offer excluded voters a new home by becoming the new worker's party. Theresa May has recognized this opportunity. Under old-school socialist Jeremy Corbyn, the Labour Party is in ruins. May won't jeopardize the Conservatives' status as the only party capable of governing by turning the Brexit ideologues within her party against her.

She is the second woman to become prime minister after Margaret Thatcher. Both share a disciplined, almost self-exploitative relationship to work, but that's where the similarities end. At the Conservative Party Conference, May spoke highly of the state and that it must be prepared to do what individuals and markets cannot. She spoke about worker's rights and said she would be firm with companies and conglomerates that avoid paying taxes.

For many within her party, those who would like the state to limit its activities to the military and garbage collection, such interventionist rhetoric is an affront. May, though, has bought herself the political leeway to take such a position by adopting a hard line against the EU and immigrants. She wants to be the woman who negotiates the British-European free-trade agreement. That will take years, maybe a decade. And afterwards, this country will be a different one. 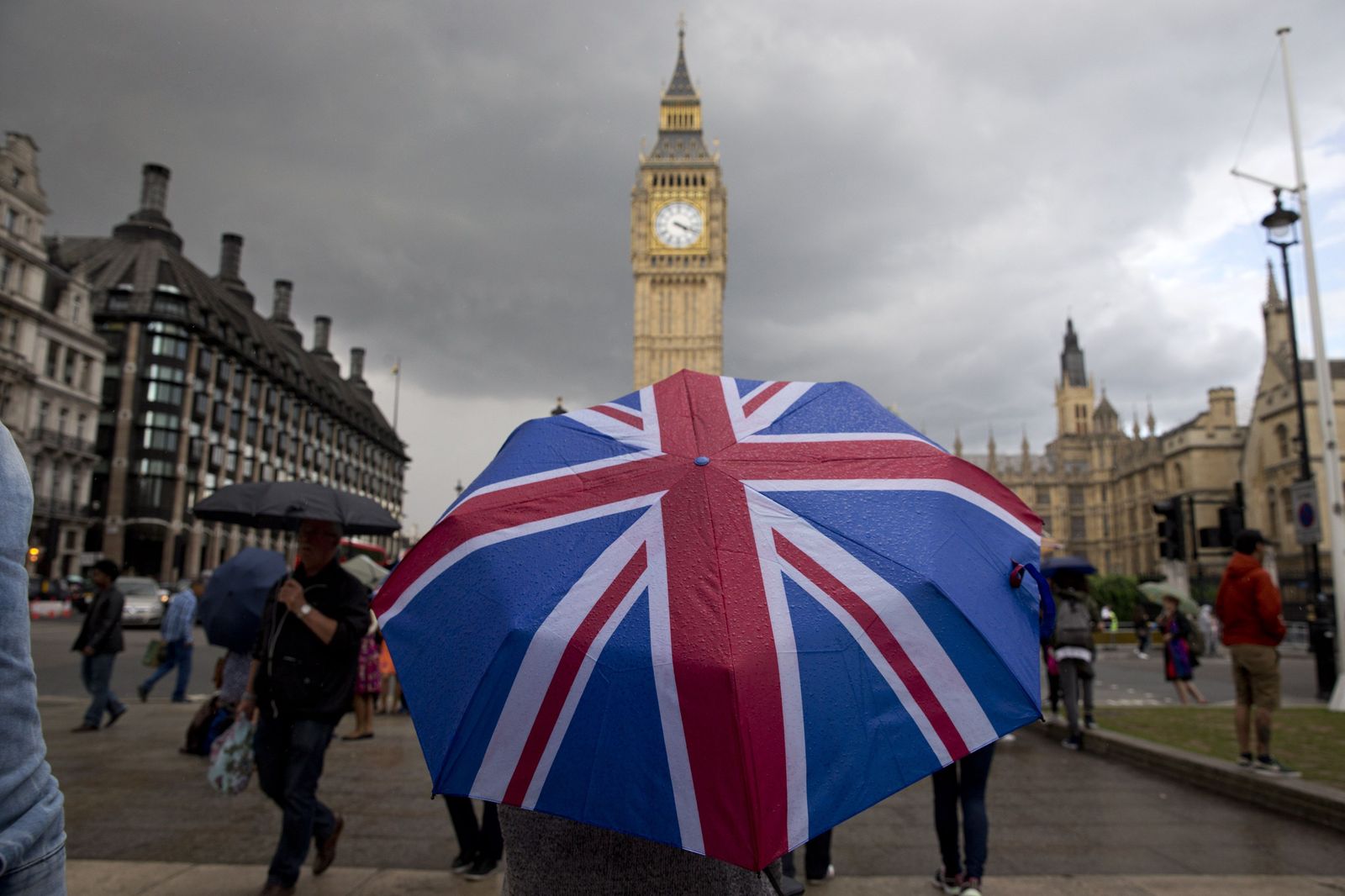 A pedestrian in London