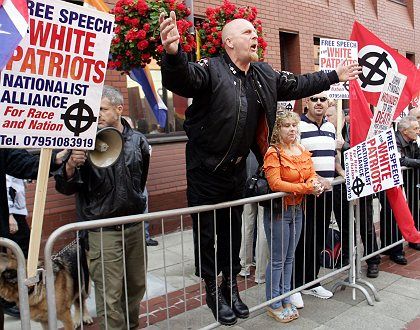 British right-wing extremists stage a demonstration in this July 2005 file photo. The EU has agreed on an anti-racism law.

Ideas about where the limits of freedom of expression should lie vary enormously across Europe. A Nazi slogan or symbol could well land you in jail in Germany, while in libertarian Denmark anything goes -- as the controversial Jyllands-Posten cartoons of the Prophet Muhammad demonstrated.

Hence it is no surprise that it took the European Union almost six years to agree on an anti-racism law, and that the final result was significantly watered down.

EU justice and interior ministers finally reached agreement on the new law Thursday, managing to reconcile radically different attitudes to how to tackle racism and genocide denial in a draft text. The text commits EU governments to taking criminal action against people or groups "publicly inciting to violence or hatred ... directed against a group of persons or a member of such a group defined by reference to race, color, religion, descent or national or ethnic origin."

The new law also calls for EU member states to impose prison sentences of up to three years on those convicted of denying genocides that have officially been recognized by the International Criminal Court, such as the Shoah during World War II and the 1990s massacre in Rwanda.

"There are no safe havens in Europe for racist violence, for anti-Semitism, (or) for people concretely inciting xenophobic hatred," EU Justice and Home Affairs Commissioner Franco Frattini commented at a news conference after the agreement had been reached.

The text will have to first be approved by the parliaments of several member states before it can come into effect, said German Justice Minister Brigitte Zypries, who chaired the talks. After that, EU states will have two years to put the rules into national law.

The final text, which took almost six years to produce, was a watered-down version of the original proposal. There will be no EU-wide ban on Nazi symbols, and there is no mention of "Stalinist crimes," something which the Baltic states and Poland had been lobbying for. Critics pointed out that the new text is less stringent than existing laws in several member states, and anti-racism groups like the European Network Against Racism criticized the law for not going far enough.

Still, politicians insisted the text was a significant step forward. "It is important to have a joint platform against racism, even if its value is more symbolic and political than legal," one diplomat, who preferred not to be named, told Reuters.