Tradition and modernity have always gone hand in hand in the Prado. Built near the centrally located Parque del Buen Retiro in the Spanish capital of Madrid almost 200 years ago, the museum brings together under one roof the court painter Velázquez's lofty and dignified portraits of the royal family and works by Francisco de Goya, a social critic who portrayed the king and his kin the way they really were: in all their ugliness, the faces above their pompous robes vacuous and complacent. The Catholic Church persecuted Goya as a sinner against the divinely willed order.

The interplay of old and new continued at the Museo del Prado this week, when Spain's royal couple unveiled the new extension to the museum designed by the famous architect Rafael Moneo. On Tuesday, King Juan Carlos and Queen Sofia stepped through the classicist main entrance, flanked by imposing columns, and into the palace once built by Juan de Villanueva. They passed Greek sculptures from the museum's collection before setting eyes on the new ultra-modern architectural work, located two stories above the foyer.

There, the 17th century cloister of the San Jeronimo Church with its Renaissance sculptures of the royal couple's ancestors gleams in mystical light. Moneo had the cloister removed stone by stone, restored and then reassembled in the same spot but with a minimalist cube placed above it. The cube is illuminated by daylight channelled through the ceiling and into a glass well that can also be lit from within. The chute, which appears to hover in the middle of the room, funnels the sunlight 18 meters (59 feet) downward.

Moneo has been fiercely criticized for his project, which took six years to complete. The costs soared until they reached the final sum of €152 million ($219 million) -- more than three-and-a-half times the original budget. The architect has modestly hidden his creation behind the Prado's historical wing so that only visitors entering the museum through the back entrance can see it from outside. The size of the Prado has increased by more than a half thanks to the addition of four exhibition halls, an auditorium, workshops facing the cloister and an archive.

Moneo has "distanced himself from the trend towards spectacular buildings" -- such as the glass pyramid built in the Louvre's courtyard in Paris by I.M. Pei or Norman Foster's sophisticated steel-and-glass addition to the British Museum in London -- says Spain's most renowned art critic, Francisco Calvo Serraller, in defense of the new building. Moneo has found "the most admirable solution" for Madrid, in Serraller's view, by opting for avant-garde architecture instead of mere imitation.

Moneo is the only Spanish architect to have received the most coveted of architectural awards, the Pritzker Prize. He has succeeded in liberating Spanish architecture from the pompous rigidity that reigned during the four decades of Franco's dictatorship. In doing so, Moneo has brought about a break with the past comparable to the one Goya achieved in painting.

Breaking Out of the Cultural Time Capsule

The beginning of this development was wholly unspectacular -- a rust-colored brick bank building on Madrid's main boulevard, the Paseo de la Castellana. Yet, it was this skyscraper that inaugurated the renaissance of Spanish architecture in 1972.

Now cities and boroughs all over the country are priding themselves on their original buildings and squares. In recent years, Spain has managed both to produce its own renowned architects and to attract international stars. The country's young architects -- many, students of Moneo -- have developed unique architectural styles, and the celebrities from abroad react enthusiastically when they are asked to build in Spain. So many exciting projects are being realized that the Museum of Modern Art (MoMA) in New York has devoted an exhibition to Spanish architecture, while Brussels has proclaimed a year of Spanish architecture.

Terence Riley, the curator of the MoMA show, describes the remarkable recovery as the breaking apart of the "cultural time capsule" that Spain was locked into under Franco. "Finally we were able to roam the world ourselves: Every journey has been an adventure," says 70-year-old Moneo, who has taught at Harvard University for the past 20 years, as he recalls the transition to democracy.

Spain has received more than €100 billion ($144 billion) since it became a member of the European Union in 1986 and the money has been used to finance major infrastructure projects, such as highways and airports. Terminal 4 at Madrid's Barajas International Airport -- a kind of glowing wall made of yellow steel and bamboo -- is one of the more recent projects. The terminal was designed by British architect Richard Rogers in collaboration with his Spanish colleague, Antonio Lamela.

When the tracks for the AVE high-speed trains were laid between Madrid and Seville on the occasion of the 1992 World Exposition, it was Rafael Moneo who transformed Atocha Station into a green oasis in the heart of Madrid.

Spain applied to host a number of major events such as the Olympic Games, which were held in Barcelona in 1992. An unprecedented construction boom began, not just in the major cities but throughout Spain's regions, which can decide independently how they want to spend their tax revenues.

Spain's Avant-Garde in Demand Across the World

Valencia, a city located on the Mediterranean coast and traditionally best-known for the orange tree plantations and rice fields in its fertile hinterland, had already developed the mega-project of becoming a "city of arts and sciences" in the late 1980s. And architect and engineer Santiago Calatrava succeeded in completing his project last year, despite various changes in the regional government's political leadership. 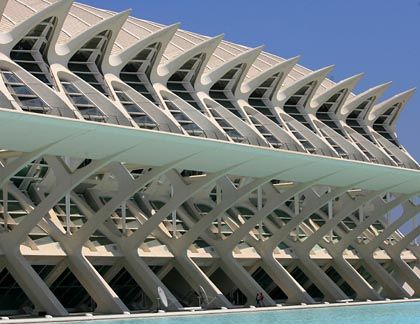 Calatrava has placed four gargantuan buildings -- all of them a luminous white -- into an artificially dried-out riverbed near the sea. The now world-famous Valencian has used concrete-and-steel structures to give shape, like a sculptor, to visions inspired by nature. While still a young boy, he discovered his first role models in his hometown, whose neighborhoods were shaped by the great architects of modernism. Calatrava's opera house, the Palau de les Arts, resembles an extraterrestrial insect, with a shell that features ceramic splinters that shimmer in light reflected by large water basins.

Calatrava, 56, has not just given his home city a new cultural infrastructure in the form of a planetarium, a museum of natural sciences, an esplanade and a concert hall. His organic architecture, which assumes the legacy of the much-admired Catalan architect Gaudí, is so original that cities across North America and Europe are now competing to have a bridge, train station or airport designed by him.

The Basque region decided early in the 1990s to bring the Guggenheim Museum to Bilbao. The planners arranged an international competition to bring dignity to their run-down industrial city by means of an important architectural creation.

The push towards progressiveness was invigorated by the steel, stone and titanium gallery that Californian architect Frank Gehry placed by the banks of the Nervión River. Gehry has recently contributed another building to the Basque region in the form of the Marqués de Riscal luxury hotel and winery located above the village of Elciego. Slanted metal slabs in pink, silver and gold frame the beige sandstone like an oversized ribbon. "We can imagine no better advertisement for our overseas business," the owners note with satisfaction.

This year, the jury of the Mies van der Rohe Award discovered a worthy winner in Léon, northwest Spain. One of the coolest buildings in the entire European Union is located on the city's outskirts, surrounded by drab apartment blocks. The building is assembled from container-like elements, forming a façade of stacked glass rectangles, as colorful as a library of randomly assembled paperbacks.

A Paradise for Young Architects

This is Léon's Museum of Contemporary Art (MUSAC) and it was designed by Emilio Tuñón and Luis Mansilla, both 48, who worked together for many years in the office of their professor, Moneo. "We wanted to build a scenario for the future," says Tuñón. The architects seem to have succeeded in crafting a building that draws people into one of Europe's most thinly populated areas. Wedding couples already prefer to have their picture taken in front of the colorful museum than in front of the local cathedral.

But it was that very cathedral, a jewel of Spanish Gothic architecture, that served as the inspiration for Tuñón and Mansilla. They created a computer image of the cathedral's oldest window. The color tones are the same, but they are now arranged abstractly instead of figuratively. Tuñón, the theorist in the team, explains their idea: "The cathedral was the public space of the 13th century. In the 21st century, the window that was once looked at from inside has been turned around to face the outside world." City-dwellers like to spend their time in squares and MUSAC has created such a central space in the midst of an otherwise uninspiring commuter town.

Spain is a paradise for young architects. Extensively trained, even recent graduates can test their skills in a wide range of competitions and compete with recognized masters of the craft, including ones from abroad. In Spain, most innovative ideas can take shape in the form of a real building.

Enric Miralles and his wife Benedetta Tagliabue, for example, covered a deserted market square in Barcelona's historic city center with a colorful patchwork canopy, bestowing a new vital center to a neighborhood populated by elderly people and immigrants.

Meanwhile, in the new Prado Museum, the movement's godfather has shown his followers the way once more. Moneo's cuboid construction features a mysterious door: black bronze plates that resemble a thick curtain. Not even the king can enter the Prado through this entrance. The door, whose six wings change position five times a day, is a work of art in itself. The exhibition begins on the street.