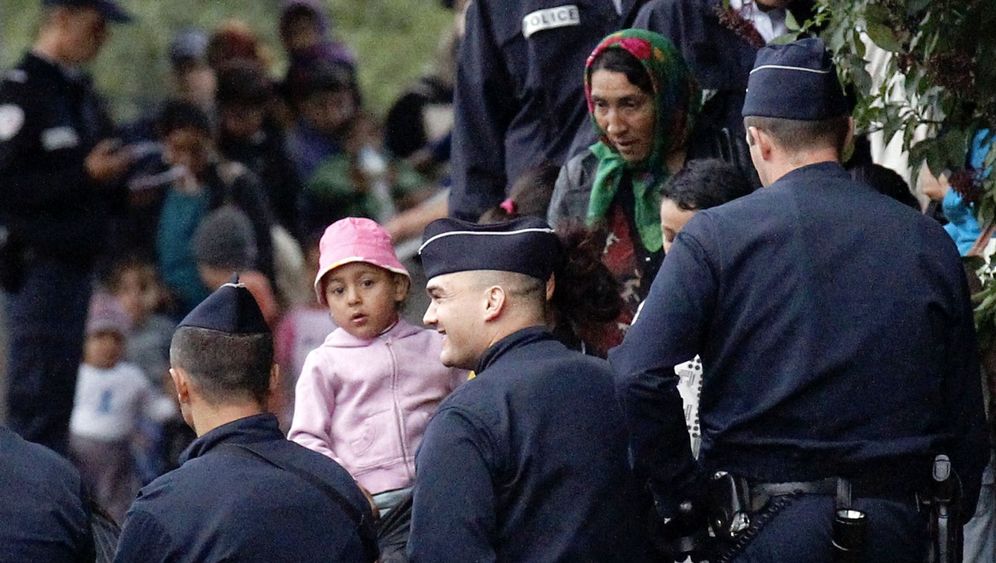 Merisor de la Barbulesti is home again, and he's in a foul mood. He is 42, has 15 grandchildren and his only source of income is his battered accordion.

The children romp around him when he gets his instrument from the living room in the evening. He sits down in the courtyard in front of his bright-red house and plays a passage from Vivaldi's "Four Seasons." Merisor can't read music. He simply plays by ear, a skill that his father taught him.

The accordion player is a member of the Ursari caste of the Roma people. His ancestors went from village to village with their dancing bears. His German accordion, Hohner's "Verdi" model, was made before the war. It has been played so much that some of the keys are worn down to the bare wood.

For six weeks, Merisor tried to earn a living in France, but then French President Nicolas Sarkozy suddenly decided to rid himself of the Roma.

About 15,000 Roma live in France, most of them from Eastern Europe. Hundreds of them are often seen camped out on the outskirts of villages and cities, and most of them manage to scrape by as harvest hands.

After clashes between Roma and police in Grenoble and Saint-Aignan, Sarkozy decided that it was time to deport them. The decision, though widely criticized, even by the pope, is not one he is likely to regret. Opinion polls show that a large majority of the French population favors sending the "traveling people" back home.

The authorities also showed Merisor the door, even though, as a Romanian, he is a citizen of the European Union and cannot simply be deported like an asylum seeker whose application has been rejected.

The police sent 60 officers to the camp in Grenoble and initially told the Roma that they had to move. The city had set up a site on the outskirts, between the highway and the railroad tracks, says Merisor. But the police showed up in the new camp only a few days later. "I have orders," one officer said. "It's better if you go, or else you'll be thrown in jail," he reportedly threatened.

Merisor, like the others, heeded the officer's recommendation and packed up his accordion. Those who had been in France for more than two months received €300 ($380), which is about the average net monthly income in Romania.

Struggling to Get By

Merisor has been home in Barbulesti, about 60 kilometers (37 miles) northeast of Bucharest, for a week now. Hordes of black-haired children play with dogs on the potholed, unpaved village streets. There is no sewage system and garbage is strewn all over.

Merisor's grandfather built the house, a long, single-story building. His mother still lives there, as does Merisor with his wife Nuta, two sons, their wives and Merisor's grandchildren. The house has electricity and a satellite dish, but the women have to walk two kilometers to fetch water.

From the courtyard gate, the crumbling towers of an old sugar factory are visible on the horizon. Many Roma used to work there. But since the factory was shut down in 1990, practically everyone in Barbulesti has been unemployed.

Merisor is waiting for the next opportunity to play his accordion, perhaps at a wedding. He is well known in the surrounding villages, and people like to hire him to play Gypsy tunes. He earns 800 leu, or about €190, per event. "No one gives decent parties anymore since our country has been in crisis," he says. "We often don't have enough to eat."

Since the Romanian economic boom came to an abrupt end and turned into a financial crisis two years ago, unemployment has climbed to more than 7 percent in the country. There are hardly any new jobs, and Romanian employers generally prefer to hire pretty much anyone else other than Roma. Entire clans live off government subsidies for children and the meager pensions of the old people. They survive by working temporary jobs, trading scrap metal or begging. Many move to the West, to France, for example, to earn money.

Some 8-10 million Roma and Sinti live in the European Union. Their ancestors left India 1,000 years ago, but they were never truly accepted in Europe. For centuries, they took on the work that the local population was unwilling to do. They were not allowed to buy land and they were practically without rights. The Nazis murdered half a million Roma and Sinti.

The overwhelming majority lives in Eastern Europe today, often in shantytowns and garbage dumps. Very few attend school for more than a few years. They are widely viewed as thieves and beggars, and often they are, living from the money their children earn begging on the streets of Western Europe. The few that have managed to accumulate wealth build gaudy houses, usually next to the slums where the other Roma live.

Most Slovaks, Romanians, Poles, Czechs and Bulgarians despise them. In Hungary, right-wing extremists have murdered nine Roma in the last three years.

'We Are at Home Here, But We Can Barely Survive'

Merisor's house on the hill in Barbulesti is laid out like a fortress, with two-meter walls surrounding the property. As soon as it gets dark, Merisor has the rickety gates locked. Then the smells of freshly baked pita bread and fried chicken waft through the courtyard. The women cook while the men wait to be served.

"We are at home here, but we can barely survive," says Merisor. The family's only income consists of the money he makes with his performances and the €10 each of the children under 18 receives in tuition support from the government each month.

It must have been sometime in May when his cousin called from France and asked him whether he wanted to go there. "Are things good there?" Merisor asked. Yes, the cousin replied. In early July, Merisor, his wife Nuta, three of their grandchildren and others from Barbulesti got into a minibus and drove 24 hours to Grenoble. About 1,000 other Roma were already camping in tents or trailers in a park there. Merisor and his wife moved into a derelict house nearby. "The house had no windows, no electricity and no water. We slept on cardboard boxes." The Roma received no support from the French government, but the children were allowed to go to school.

Every day, Merisor went from restaurant to restaurant with his accordion. "The French are not unfriendly," he says. "I earned €20-30 a day, but then Sarkozy decided to kick us out."

Harming the Reputation of the Roma

Ion Cutitaru, 59, the mayor of Barbulesti, says he is the only Roma mayor in all of Romania. Cutitaru arrives in an old Opel Ascona driven by his son Zobar, who works for him as his driver. "The French should use us as cheap labor instead of driving us away," he says angrily. The door to the mayor's office sticks. The financial crisis has forced Bucharest to reduce subsidies by 35 percent. "Sarkozy is seriously harming the reputation of the Roma. Now all of Europe sees us once again as thieves and criminals."

Cutitaru is wearing his mayor's sash, in the Romanian national colors. His son Zobar already tried his luck in France once before. He tried to work in construction but no one wanted to hire him. "So he begged instead," says the mayor. In the hallway, in front of the "Office of Social Affairs," he demonstrates how he imitated a cripple, his body hunched over and his legs bent.

Cutitaru estimates that more than one-third of the adult residents of Barbulesti are now traveling in Spain, Italy, France and elsewhere. "They all return home, in no more than five years," says the mayor. Five years, he adds, is about the amount of time it takes to save enough money to build a house in Barbulesti.

But Cutitaru also knows that things can't go on like this forever. "Education is the way out of poverty," he says. Some 150 first-graders will begin attending school in two weeks. "But we don't even have enough chairs for everyone," he says. "Our birth rate is simply too high. The average family has seven children."

The school is housed in a gloomy, Communist-era building a few doors down the street from the mayor's office. The school year hasn't started yet, but Elena Ion is there. She is the only Roma among the 40 teachers. Instead of the typical headscarf, she wears her sunglasses pushed up into her hair.

"I was lucky," she says. "My father read books at home, which no one else does here." He also made sure that after finishing eight grade in Barbulesti, she was able to attend high school in Urziceni and later the university in Bucharest. She is now 47 and proud of her two daughters. One has just finished her examinations in political science at the university in Bucharest.

Ion refers to the Roma in the third person, as if she were no longer one of them. "Only about 15 of 150 first-graders will finish eighth grade -- and only boys." The girls are "sold" at 12 or 13, she says. Roma fathers receive a bride price of up to €6,000 for the prettiest of their daughters. "They will already have five children of their own by the time they're 20."

It's late, Merisor has finally put down his accordion and now he is cursing away. He boasted to the other villagers about the thousands of euros he had supposedly brought home from France. But in reality it was only a few hundred, barely enough money to feed his family for a few weeks. The house needs a new roof and Merisor wants to build an addition. The first of his grandchildren are already older than 10, and will soon reach a marriageable age.

He says he will wait a few more weeks, until all the excitement over the Roma has settled down, and then he'll drive back to France.