It looks a little like group therapy, as they sit there on a stage in the auditorium of Zürich's "Kaufleuten" Club: two Germans, three Swiss and a former German who is now a naturalized Swiss citizen (a species referred to in Swiss German as "Papierli-Schwizer," or "Swiss on paper").

They are discussing the question of whether "Zürich is too German." It's a topic that has become even more sensitive than usual in the last few days, as a result of tensions caused by the German government's decision to buy a CD with stolen bank account data in a bid to crack down on German tax evaders who stash their money in secret Swiss accounts.

They are all exquisitely polite to each other, even when they argue, a reflection of the Swiss approach to discourse. The president of the German Club of Zürich, Vanessa Matthiebe, says that anti-German sentiment is currently being "whipped up by the media" and describes the situation as "very tense." 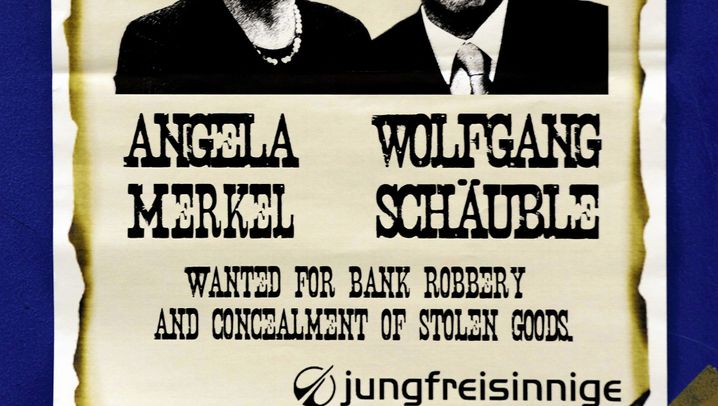 "Germany bashing was never our intention," says Roger Liebi, the chairman of the Zürich branch of the populist right-wing Swiss People's Party (SVP). Liebi is the same man who, only a few weeks ago, ran full-page newspaper ads in which he sharply criticized "German sleaze" at the University of Zürich. When he was accused of racism, he ran another ad that read: "Are the Germans a race?"

It takes Liebi a full hour to make his point: The aggressive language currently coming from Germany regarding, among other things, Swiss banking secrecy laws "doesn't exactly make for good relations with the people you encounter in this country." He is referring to Germans living in Switzerland. Then he explains his worldview: A German, he says, is "fundamentally more subservient to authority than a Swiss. A Swiss would never dream of approving this deal being pursued by the German government."

Liebi has a tendency to lump together very different issues. In this case, he manages to establish a link between the German government's pressure on Swiss banking secrecy and the large number of German immigrants in Switzerland. Switzerland's identity is being assaulted, and in both cases Germany is somehow to blame.

It is Thursday evening of last week, the same week in which German Chancellor Angela Merkel decided to pay an informant €2.5 million ($3.5 million) for a CD containing bank data on German tax evaders. The information could net German authorities up to €400 million in back taxes.

Merkel's decision triggered a storm of outrage in the Swiss media and among conservative politicians. This time, the public outcry is even more aggressive than it was a year ago, when then-German Finance Minister Peer Steinbrück likened the Swiss to "Indians" and suggested that the cavalry ought to be dispatched to deal with them.

"This is really a huge outrage," said Christoph Blocher, the father figure of the SVP and leader of the right wing in Switzerland. "There are criminals in the German government," he said, "who are in a position to organize acts of theft." Blocher even voiced his concern that Germany was not too far away from the step of "occupying a country."

Politicians in the SVP, as well as those in the middle-class centrist parties, accused the Berlin government of "dealing in stolen goods." The online version of the tabloid newspaper Blick published a photo of the chancellor seemingly raising her hand in a Hitler salute. In Zürich, young liberal politicians put up wanted posters depicting Merkel and German Finance Minister Wolfgang Schäuble, along with the words, in English: "Wanted for Bank Robbery." Roger Köppel, editor-in-chief of the right-wing weekly magazine Weltwoche, suggested that German cabinet ministers entering Switzerland should be arrested.

But some attacks have been directed against Germans living in Switzerland. A Swiss professor proposed raising tuition fees for German students in response to Berlin's affront. SVP Chairman Toni Brunner insinuated that Switzerland might want to think about what to do with German immigrants.

For the SVP, the new wave of indignation directed against the German government conveniently coincides with its current campaign against Germans in Switzerland, its favorite subject for the past weeks. In fact, the number of Germans in the country has more than doubled since 2002, to the current level of 250,000, out of a total population of 7.8 million. Three years ago, Germans displaced Italians as the largest immigrant group in the canton of Zürich. Most are well-educated specialists and business executives working in industry, at universities and in the healthcare system. Without these immigrants, it would be extremely difficult to keep Swiss hospitals up and running, for example. But the country's politicians, including members of the SVP and parties on the left, see the high immigration figures as competition for the Swiss middle class.

Cultural and linguistic differences have also been the source of conflict in everyday life. Many German-speaking Swiss view the Germans as "loud, not very sensitive and arrogant," says Julia Morais, the integration official for the canton of Zürich, who also happens to be German. She now organizes "welcome evenings" for her fellow Germans, where they learn, for example, not to shout "Check!" in restaurants, but to politely ask whether it might be possible to pay.

With about 30 percent of the vote, the SVP is Switzerland's largest party. Part of its recipe for success is that it has a knack for seizing upon and amplifying the public mood. This helps to explain why it has now managed to successfully link the two very different issues of German immigration and Swiss banking secrecy.

Resentment over the data theft scandal is only one manifestation of the deeper mood in Switzerland, which is characterized by an odd mix of outrage and resignation. Switzerland comes across as an insecure country, struggling to defend its position within Europe and worried about its prosperity -- in light of the economic crisis, immigration and challenges to its status as a financial center.

After countless scandals, large segments of the population and the political world have had enough of banks and tax evaders. The furious statements coming from politicians reflect unease about the country's changing identity, now that banking secrecy is under threat.

"The middle-class elite of Switzerland finds itself in a painful process of adjusting to the new reality. This leads to aggression," says Social Democrat Rudolf Strahm, who, as a former member of the Swiss parliament, has always fought against the protection of tax evaders. "For decades, the elite have cultivated banking secrecy as a myth and have incorporated it into the Swiss identity." This, says Strahm, has led to "a cultural dominance of the banking lobby, which has, in a sense, colonialized the way we think about this issue." Strahm also believes that the immense importance of this myth is the source of a "twisted concept of injustice," under which the Swiss morally condemn the German data purchase but do not condemn the protection of foreign tax evaders.

The aggressive reaction of many Swiss politicians is also surprising, because in reality the government already abandoned banking secrecy a year ago. In response to massive pressure from the American authorities, it handed over the names of 250 presumed tax evaders who had invested their money with the Swiss bank UBS. A few months ago, it also agreed to provide Washington with the names of another 4,450 wealthy Americans.

Fearing that it would end up on a blacklist compiled by the Organization for Economic Cooperation and Development (OECD), Switzerland even announced last year that it would provide foreign officials with assistance in tax evasion cases. In the past, it had only provided such assistance in cases involving fraud, that is, when bank customers had falsified documents, a distinction that was the core of the Swiss principle of banking secrecy. The Swiss government has already negotiated corresponding bilateral agreements with 18 other countries.

Swiss Finance Minister Hans-Rudolf Merz, who was initially irate over the German move, adopted a more diplomatic tone last Wednesday, when he said that while the government was disconcerted and would not provide administrative assistance in the case of the stolen data, it did plan to continue treaty negotiations with Germany. Merz, who had consistently defended banking secrecy, even raised the possibility of an automatic exchange of data with foreign authorities -- and in doing so violated a strict taboo.

That evening, Swiss Foreign Minister Micheline Calmy-Rey participated in a podium discussion in Basel. When she was asked whether she would ever purchase stolen bank data, she smiled and said: "If I were the finance minister, I would give serious thought to such an offer, because one is constantly searching for money and doesn't like to see people committing tax evasion."

The Desire to Not Be German

The front of those who are still fighting to defend the remnants of the country's previously invulnerable banking secrecy is crumbling. In recent days, even representatives of Switzerland's centrist parties, the CVP and the FDP, have suddenly started talking -- contrary to the official positions of their party leaders -- about completely lifting the distinction between tax evasion and tax fraud.

Meanwhile, the media are still savoring the spat with the Germans. Conservative journalist Markus Somm wrote in Weltwoche that wanting to not be German lies at the core of Swiss identity, and that this is something the Germans do not understand. Perhaps this is why Switzerland's German-speaking population is reacting so much more aggressively to the doubts being voiced in Germany about banking secrecy than it does to similar threats coming from the Italians, French or Americans.

At the podium discussion in Zürich's "Kaufleuten" Club, the panel members were unable to agree on whether Zürich had already become too German, nor could anyone offer a solution to the diplomatic row between Switzerland and Germany. Nevertheless, Vanessa Matthiebe of the German Club of Zürich said she still likes living in Switzerland.

SVP politician Roger Liebi even said he felt sorry for neighboring Germany -- because so many Germans feel the need to flee such a horrible government.