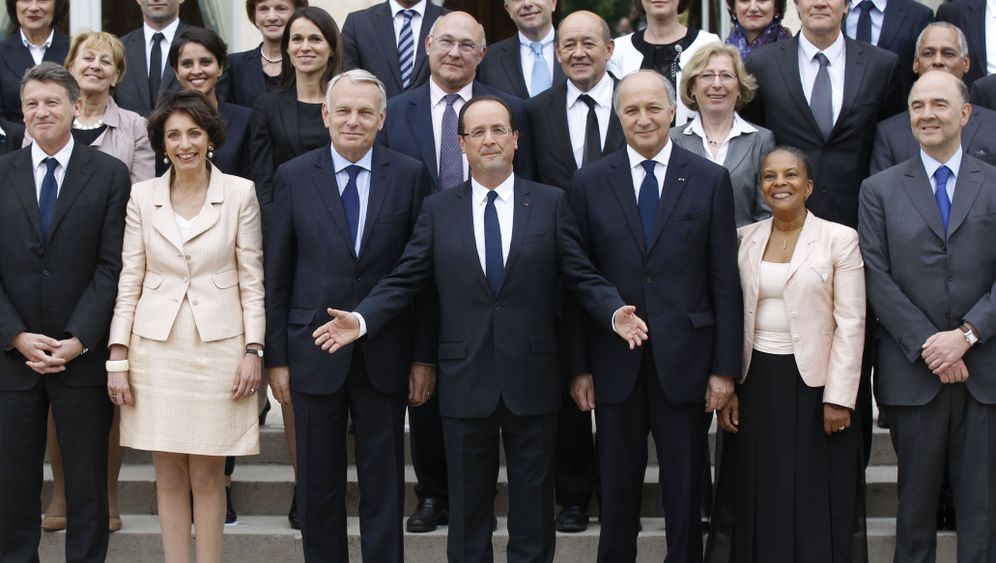 When Carla Bruni left the Élysée Palace in Paris last Tuesday, cheered by an approving crowd, hand-in-hand with outgoing President Nicolas Sarkozy and flanked by the Republican Guard, before driving off in a mid-sized car, it marked the symbolic end of an era.

The former French first lady's outfit also seemed to anticipate her departure. Her pinstriped trousers were a little too baggy, and her blouse was a little wrinkled and the sleeves seemed too short. Valérie Trierweiler, the partner of the new president, François Hollande, stole the show.

Of all the goodbyes in France last week, the departure of Nicolas Sarkozy and Carla Bruni, the former glamour couple, attracted the most attention. And yet it was only one of dozens. Nowhere in the world is a change of government celebrated with such pomp as in France.

The country has just seen an entire week of ministers from the outgoing administration leaving their palace-like ministries. They greeted their successors on the steps, took them to their offices and then gave joint speeches. The solemn ceremonies were broadcast live on television.

Even though these were encounters between the winners and losers of the election, there were also heartfelt moments, such as when the new minister of culture delivered an effusive speech about art and handed her predecessor, who was visibly moved, a book with her inscription inside. But most of the winners couldn't stop themselves from making mean-spirited remarks. For instance, the new foreign minister, Laurent Fabius, said to his predecessor Alain Juppé: "This must have been the job you loved the most. I can already feel that it will be the same for me."

By far the most ostentatious of all inaugurations was reserved for the new president. His entrance into the Élysée Palace, in the presence of the country's assembled elites, was nothing less than a coronation. "You embody France. You symbolize the Republic," the president of the Constitutional Council said to the new Socialist president. The king is dead. Long live the king.

The differences between French and German political cultures are rarely as clearly in evidence as during the period of the passations de pouvoir. The ceremony marking the transfer of power is a grand theater of democracy, a dance of the vanities in which the new ministers display the pride they feel in attaining their new offices in a way that would be inconceivable in Berlin. Perhaps this also has to do with the fact that Paris's ministries are palaces, unlike the functional office buildings in Berlin and Bonn where German government ministries are housed.

After the victory of François Hollande, France now has a leftist president for the first time in 17 years -- and, for the first time since 2002, a Socialist government. But that government is only in office until the next parliamentary elections, on June 10 and 17. It will also have almost no power until then, because the left lacks a parliamentary majority. Nevertheless, the president has installed Prime Minister Jean-Marc Ayrault and his new cabinet, as he is entitled to do under the French constitution. And because the members of parliament are in recess, they cannot vote the new cabinet members out of office. In essence, the appointment of the new government is merely the starting shot for the next election campaign. The outcome of that election will truly decide how much power Hollande will wield.

The interim government must now perform the feat of keeping the left happy and winning over a majority of French voters. It has four weeks to do so. The chances are not bad that voters will in fact provide the left with a majority in the National Assembly, the lower house of the French parliament, but such a win is by no means guaranteed. France leans slightly to the right, despite Hollande's victory. A right-wing government and a left-wing president, known in France as "cohabitation," is a recipe for political gridlock, which the economically weakened country can ill afford.

The new government already represents change in the form of its personnel. The left has been out of power for so long that many faces are unfamiliar to the French. Only a few ministers have government experience. And, with 17 women and 17 men, it is the first government in which both sexes are equally represented, although men hold most of the key posts.

It also mirrors the country's multicultural makeup. The government spokeswoman came to France from Morocco as a child, and the interior minister was born in Barcelona. The minister of Francophone affairs has Algerian roots. Two ministers are from French overseas territories. The junior minister for veterans, who was born in Algiers, wrote on Twitter: "What an honor for me, as the child of parents who were illiterate."

One of the government's symbolic first acts was to slash ministers' monthly salaries by 30 percent, to €9,940 ($12,674). The move can be seen as a sign of the toughness that this government will have to demonstrate to itself and to citizens starting at the end of June, provided it obtains a parliamentary majority then.

In the next few days, the government will receive a report from the audit office on the country's finances. Drastic austerity measures are needed to get the deficit under control. It was recently revealed that France's budget deficit would reach 4.2 percent of GDP in 2013, compared to the figure of only 3 percent that had been previously announced. Hollande plans to stick to the current target, but to achieve that alone he would have to save more than €20 billion a year.

The Socialist politician made many expensive promises during the campaign, including lowering the retirement age to 60. But he also said that he was aiming for a balanced budget, and he seemed to be serious about it. Last Thursday, his new finance and economics minister, Pierre Moscovici, said: "Debt is our enemy." Reducing France's debt is a top priority, he said.

The new team knows that it must implement structural reforms if it hopes to do anything about high unemployment, currently at 10 percent, and sluggish growth. Addressing these problems will mean disappointing voters. Finance Minister Moscovici is part of the right wing of the Socialist Party, as are Labor Minister Michel Sapin and Hollande himself.

Hence it is center-left politicians who are setting the tone in this government, rather than the left wing. This is probably one of the reasons why Hollande's leftist rival, party leader Martine Aubry, has declined to fill a ministerial post, now that she has not become prime minister as she had hoped.

The man who is to set the government's course on Hollande's behalf is Prime Minister Jean-Marc Ayrault. As a former German teacher, he speaks the language fluently and is very familiar with France's neighbor. Ayrault drives an old VW bus, maintains close ties to Germany's center-left Social Democratic Party (SPD) and reads German newspapers regularly. Last week, he was photographed for Paris Match with a copy of SPIEGEL in his hand.

Ayrault, 62, has long been a close confidant of the president. He was the Socialists' parliamentary floor leader when Hollande was chairman of the party. He advised the candidate during the campaign, partly as his expert on Germany. Hollande will urgently need a loyal supporter in the coming years. The two men are similar. Both are pragmatists, both are better at compromise than confrontation, and both have reserved personalities. The new prime minister is an unknown entity for many Frenchmen. In a poll conducted late last week, 38 percent of respondents said that they couldn't put a face to his name.

This inconspicuousness, and the soberness of the two most important men in the country, is the biggest contrast to the "bling-bling" presidency of Nicolas Sarkozy. If Sarkozy's administration was a personality show, the new administration is characterized by serious workers. The Sarkozy administration had Carla Bruni, while the Hollande administration has Jean-Marc Ayrault. Perhaps that is the real message of last week.