Start off by saying no. That, in a nutshell, seems to be the German government's policy when it comes to fighting the euro crisis -- one it has followed since the spring of 2010. Whether it was aid to Greece or to the expansion of the euro rescue fund, the European Financial Stability Facility (EFSF), Chancellor Angela Merkel always started out by taking a position contrary to economic and political necessity, only to end up caving in later. The approach has not been pretty to watch, and it also tended to exacerbate the crisis.

But the government has not, it would seem, learned its lesson. That can be seen by its contribution to the current debate over whether the rescue fund EFSF should be authorized help troubled banks directly in the future. Naturally, Berlin is rejecting this approach. But in so doing, it is deceiving itself on two counts. Firstly, it is behaving as if the banks were in excellent condition. And secondly, it is continuing to embrace the illusion that the euro can be saved without EU member states having to surrender any national competencies to Brussels.

Berlin's position stands in contradition to that of two institutions that know better. Both the International Monetary Fund (IMF) and the European Banking Authority (EBA) believe that European banks need more capital quickly in order to survive the current and future crises. The EBA is also calling for the EFSF rescue fund to take over this task and -- if necessary -- give the banks fresh money.

One can argue about whether it is wise to unsettle investors with such a public discussion, if one already considers the banks' position to be shaky. In terms of their proposals, however, the IMF's managing director Christine Lagarde and EBA head Andrea Enria are absolutely correct.

The banks are in fact in a bad way. Most of them still have a lot of Spanish, Italian, Portuguese and Irish sovereign bonds on their balance sheets, and it is not entirely clear whether these will ultimately be repaid in full. That in turn is fueling distrust among the financial institutions themselves and many have stopped lending each other money. They are only being kept alive because the European Central Bank (ECB) is making an unlimited amount of money available to them and are accepting securities as collateral that many investors no longer consider to be safe.

Better capitalization for the banks could alleviate this mistrust, because more equity means that the banks could better absorb losses from their sovereign debt business. Those institutions that are not strong enough to raise the money themselves on the capital market would have to be helped out with public money. There is hardly an institution that is better suited for that job than the EFSF. Admittedly, the rescue fund was originally set up to save countries. But it would only be logical to extend its competencies so that it could also bail out banks.

That was previously a job for national governments. At the last emergency summit in July, the euro-zone countries decided to expand the powers of the EFSF. In the future, it will, for example, be able to provide countries with money for recapitalizing their banks -- but each government wants to continue carrying out the actual rescue by itself. That is a cumbersome procedure, and one that makes no sense. It also shows, once again, that the euro-zone countries are still reluctant to take an approach that is communal enough to save the common currency in the long term.

Saving the banks and saving the euro are linked inextricably together. If a euro-zone member goes bankrupt, banks in the whole of Europe will go into a tailspin. And if banks go bust, national governments will have to step in to rescue them.

Hence, the euro dilemma has become a question of all or nothing. The middle way, with its desire for a bit of integration but not too much, has been pursued for far too long. And it has not worked. The countries involved need to make up their minds whether they really want the common currency, and whether they are prepared to abandon national competencies in return.

If they are prepared to do that, then it is not enough for them to take but tiny steps. Instead, they have to run -- in the direction of a true economic community. That would involve, on top of joint financial policies, a joint mechanism for fighting crises. That is the EFSF, which will be renamed the European Stability Mechanism (ESM) as of 2013. It needs to be able to save faltering banks as well as faltering states. And it needs to be equipped with an impressively large amount of capital by the euro-zone members, so that such rescue measures are not even necessary in the first place.

Naturally all of this is a bitter pill to swallow for members of national parliaments in many countries. Members of German parliament would prefer not to give any more powers to Brussels at all. That is understandable and is, of course, also possible. In the end, though, such a course would likely mean that they would ultimately have to give up the euro. 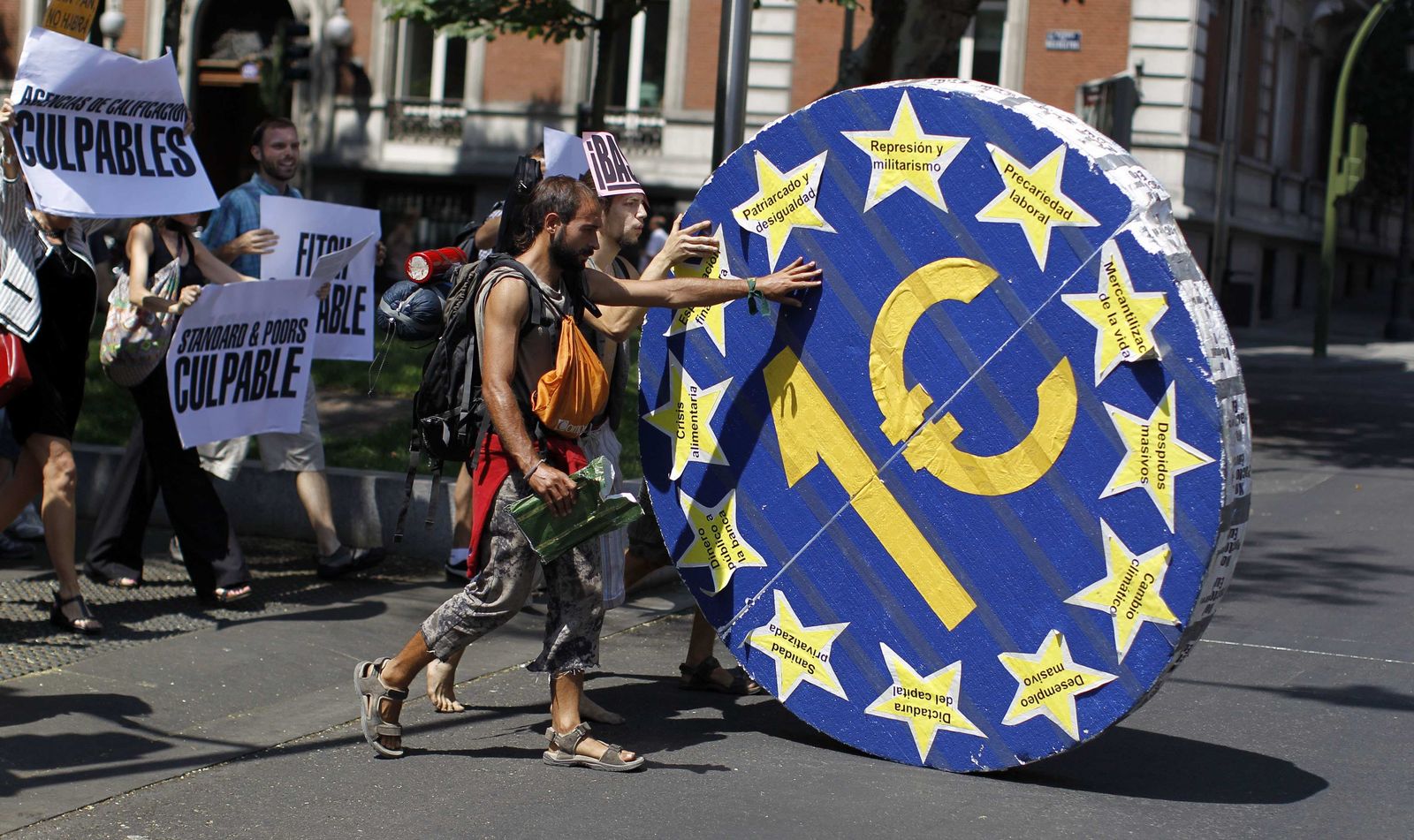 Demonstrators in Spain (July 2011). The fate of the banks and the euro are inextricably linked.