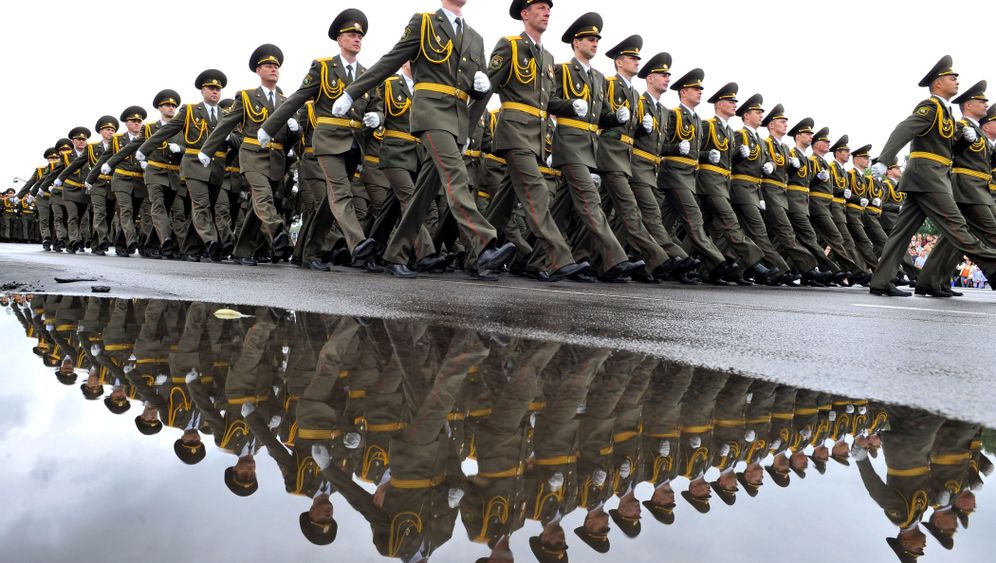 Three women are sitting on a bench next to a currency exchange in a large department store in Minsk, the capital of Belarus. They are doing crossword puzzles, hoping that dollars or euros will eventually become available again.

"We have a waiting list here," says one of the women. "There are 310 people on it, and they all want to exchange their rubles. I signed up in April. Now it's July and it should be my turn. But I've been sitting here for days, and no one is showing up to sell dollars."

Belarus devalued its currency by 36 percent in May. On the black market, where the ruble hasn't been worth much for a long time, one euro costs 9,000 rubles -- more than twice as much as at the beginning of the year. People are seeking refuge in hard currency -- if they can get it, that is.

A dramatic crisis has gripped the bizarre realm of dictator Alexander Lukashenko. Exports have tumbled, the foreign debt has skyrocketed and prices are exploding. As of last week, gasoline is now in short supply at filling stations.

The women sitting next to the currency exchange in the Minsk department store seem to confirm all of the common prejudices about Belarus's roughly 9 million people, namely that they are placid, even when sorely tested by fate, passive, subservient to authority and completely apolitical.

But this image isn't quite true anymore. Even the Belarusians are now trying their hand at civil disobedience.

For weeks, thousands have been taking to the streets to demonstrate their dissatisfaction with the Lukashenko regime, but they are going about it in a playful and almost joyful manner. They meet in public squares, seemingly spontaneously, walk in groups through parks, suddenly start to applaud and organize peaceful motorcades. It's the Belarusian version of flash mobs.

Lukashenko has ruled unchallenged for 17 years, during which he has eliminated the political opposition and the free press. But he seems overwhelmed by the protests of recent weeks. In fact, Lukashenko is so beside himself that he now has entire busloads of people arrested almost every day, without any legal justification.

When people in Belarus "are no longer being arrested by the hundreds but by the thousands, an irreversible process has begun," says Ukrainian political scientist Vladimir Gorbach. Similarly, the Moscow newspaper Nezavisimaya Gazeta writes that the "end of the Lukashenko era" is approaching. In the wake of the revolutions in Tunisia, Egypt and Libya, are we now witnessing the twilight of a regime that has persisted for so many years, wedged between the Western European democracies and the new Russia?

Lukashenko, 56, who was the political commissioner of a tank company during the Soviet era and later the director of a collective farm, was reelected to another term as president in December, but the vote was apparently blatantly rigged. With the help of the police and state security units, he managed to brutally suppress the established opposition, which called on its supporters to take to the streets after polling stations closed. His task was made easier by the fact that the regime's opponents, who are organized in very small parties and include former top government officials, are internally divided and have little support among the population.

The president had bought the approval of many Belarusians with generous wage and pension increases. The unspoken agreement was that the people could enjoy economic security as long as they stayed out of politics. After the election, Lukashenko promptly got even with his adversaries, without encountering any resistance from the public, at least at first. They were jailed on charges of having incited "mass unrest." Several of the opposition's former presidential candidates are now in prison.

But then an economic crisis occurred in the spring. Belarus's economy, already suffering from the high prices of oil and natural gas from Russia, ran out of money, and Lukashenko's irresponsible wage increase only made the situation worse. Because the country imports far more than it exports, its balance of trade also collapsed.

What failed to happen after December's election is now happening half a year later: The population is rising up. The Independent Institute of Socioeconomic and Political Studies, which now operates in the Lithuanian capital Vilnius after having been expelled from Belarus, has documented the radical shift in the public mood with a detailed opinion poll.

It concludes that the number of people who are dissatisfied with their material situation has tripled since March of this year. Some 73 percent of Belarusians complain that their quality of life has worsened dramatically, and almost one in two blame it on the president. Lukashenko's approval rating declined from 55 percent in December, the month of the election, to only 33 percent in June. Close to two-thirds of poll respondents say that it is "not good for the country" that Lukashenko now has absolute power.

The radical shift in public opinion is so remarkable because it shows that criticism of the dictator has reached the middle class, which includes Belarus's small and mid-sized business owners. They feel that Lukashenko's state socialism is disastrous.

Building a Belarusian Civil Society from the Ground Up

This would be an ideal moment for any classic opposition movement. But the former opponents of the regime have been paralyzed since the reprisals that took place after the Dec. 19 election. Now a completely new group has taken their place. Calling itself Revolution Through Social Networks, the group is constantly generating new ideas, and uses the Internet to organize protests against the government. It has managed to create something of a Belarusian civil society in only a few weeks.

It was this group that spoiled the country's Independence Day for Lukashenko on July 3. While the president was reviewing a military parade in downtown Minsk, where he warned in a speech that the country could descend into "chaos and become ungovernable," hundreds of clapping protesters marched defiantly through the streets, following a call to protest that had appeared on the Internet.

To enable security forces to quickly locate such troublemakers, Lukashenko had prohibited applause during his speech, turning the official ceremony into an eerily quiet event.

'At Least You Should Fear God'

His thugs were active all day long. A blogger calling himself "nattuzi_lu" wrote that he was awakened at 8:30 a.m. by a loud knocking on his door. "Three policemen ordered me to shut all my windows and the door to the balcony, and not to take any pictures of anything going on in the street."

About 400 people were arrested on that day and fined or jailed on charges of having taken part in "unannounced mass actions."

The absurd scenarios were repeated on Wednesday of last week. This time the Internet activists had called upon protesters to walk casually from various Minsk neighborhoods to the city's downtown area. Hours earlier, police and state security officers had already sealed off all metro exits and positioned patrol cars in courtyards behind buildings. Once again, hundreds were arrested, including Russian TV journalists and even ordinary citizens strolling in Peoples' Friendship Park. The authorities had preventively sealed off all central squares in provincial cities like Gomel, Grodno and Pinsk.

On their website, the social networkers called upon the president to stop giving "criminal orders" to his security forces. "We do not appeal to your conscience, because you don't have one," they wrote. "But at least you should fear God."

On Wednesday of this week, police in Minsk again beat up and arrested dozens of protesters in Minsk following another rally by Revolution Through Social Networks, the Associated Press reported. The latest rally featured a new technique by demonstrators -- hundreds of people had set the alarms on their cell phones to ring at 8 p.m., symbolically calling on Belarusians to "wake up" and resist.

The paranoid president believes that the protests are part of an "information war" against him, and that the protesters are in fact being paid by the West. "They are the enemy of the people, the fifth column," he said in a speech last Thursday, only to turn around and joke about the people who had been arrested. "If the EU wants to take them, no problem, we'll send them out tomorrow," he said, adding that he would send them "on a train or even on board a plane -- that would be faster." He said he would also send "those who freely walk the streets, mooing and provoking."

The former East German leader Erich Honecker said similar things, though perhaps not as crudely, in the final days of socialist East Germany. Stories in the Minsk newspapers are now reminiscent of articles in the East Berlin papers in the autumn of 1989, shortly before the Berlin Wall fell. Lukashenko's dreary official mouthpiece Soviet Belarus prints almost daily tirades against the "inhumane West" and its failed democratic model, while at the same time calling for "self-sufficiency" and encouraging workers to increase their efforts.

Can Lukashenko stop the decline of his economy with foreign loans? His fate depends on the answer to this question. The Eurasian Economic Community (an organization consisting of Belarus, Kazakhstan, Kyrgyzstan, Russian and Tajikistan) and Russia have pledged funds, but Belarus's large neighbor to the east is now losing patience with Lukashenko. Moscow is tying its funding to Minsk agreeing to major concessions in return. Last week Gazprom Chairman Alexei Miller called Lukashenko to let him know that he intended to acquire the last remaining shares of the Belarusian pipeline operator Beltransgas.

Europe's last dictator was popular for a long time, say Russian experts on Belarus, and he could have used this popularity to invest in economic reforms. But now he has irrevocably missed his opportunity to legitimately transform his system.

Lukashenko, a village boy who grew up without a father and a mother, and who later became completely enamored of his power, is growing increasingly out of touch with reality, says his Moscow-based biographer Valery Karbalevich. "He doesn't know what is happening in his country anymore. But ignorance produces fear."