US anti-terror officials want to be able to continue examining Europeans' financial transactions, and it appears likely that the European Union is going to comply. 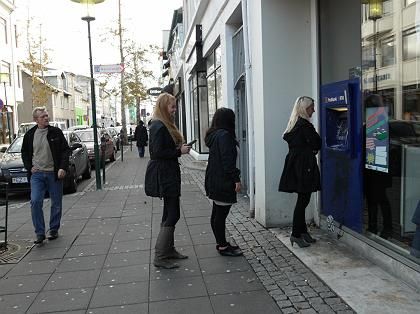 Customers queue to get cash from an ATM.

On Monday, foreign ministers of European Union member states gave their approval for the European Commission and Sweden, which currently holds the six-month rotating EU presidency, to negotiate an agreement with Washington that would allow it to scrutinize European citizens' banking data. However, there is a growing wave of criticism from across the political spectrum in Germany and from the European Parliament.

Guido Westerwelle, head of the business-friendly Free Democratic Party (FDP), criticized the move, saying it was "totally unacceptable" that US authorities are provided with access to movements in accounts in Germany. "This plan must be stopped," he told reporters after the decision.

The US has been examining transactions handled by the Society for Worldwide Interbank Financial Transactions (SWIFT) since the 9/11 attacks on New York and Washington. However, SWIFT, which is headquartered in Belgium, is planning to move its servers and database -- which is currently located in the US -- to Europe. With data privacy laws far stricter in Europe, the US would then need permission from the EU before it could gain access to this sensitive information. SWIFT handles 15 million transfers a day between over 8,000 banks and other financial institutions.

EU governments agree that having the ability to examine banking records can be a useful instrument in the fight against terrorism. However, many German politicians and officials have raised the alarm about European citizens' private data falling into the hands of US anti-terror authorities.

Max Stadler, a member of the German parliament with the FDP, told the Berliner Zeitung newspaper on Friday that his party rejected an agreement because of the lack of data privacy protection.

The deputy chair of the far-left Left Party, Halina Wawzyniak, told the same newspaper that: "There is a danger that every person who transfers even a cent from one account to another is completely open to examination."

Jürgen Tritten, the floor leader for the Green Party in the German parliament, told the Berliner Zeitung newspaper in comments published on Monday that: "It is completely disproportionate and excessive for banking data to be handed over without there being suspicion of a crime." This kind of "blanket spying" should not be accepted by the EU, he said, adding that the German government should "in no way agree to this attack on the principles of data privacy."

Last Wednesday, EU Justice Commissioner Jacques Barrot told members of the European Parliament (MEPs) that any agreement with Washington would only be an interim one that would last until the Lisbon Treaty is finally ratified. The stalled treaty, which is designed to streamline how the EU does business and is to be put to a second referendum in Ireland in October, will give the European Parliament a greater say in EU legislation.

However, some in the European Parliament are outraged that they are not also being consulted on this temporary agreement. On Monday, the head of the Greens in the European Parliament, Daniel Cohn-Bendit, said that European Commission President Jose Manuel Barroso was "playing with fire," adding that he should either include the parliament in the talks or stop them altogether. In comments published in the Monday edition of the Berliner Zeitung, he warned that, otherwise, there would be a "massive putsch in the parliament."

Markus Ferber, an MEP for the Christian Social Union (CSU), the Bavarian sister party to Chancellor Angela Merkel's conservative Christian Democratic Union (CDU), told TV news show Tagesschau on Monday that the plan to negotiate a deal with the US was a "conscious attempt to bypass the European Parliament by allowing such far-reaching and serious attacks on rights to privacy."

German Data Protection Commissioner Alexander Dix has called the plan to share banking data with the US "unacceptable" and urged Germany's federal government to oppose it. On Monday, he told the Berliner Zeitung that he suspected that the EU wanted to push through the plans now because, once the Lisbon Treaty has been ratified, any agreement would require the backing of the European Parliament.

On Monday, Günter Gloser, a top official at the German Foreign Ministry, said that data privacy would play an important role in the negotiations with Washington. "In the preliminary talks, the German federal government was very precise about the framework the commission should stick to during the talks," he told reporters.

Berlin wants all the issues of legal protection to be clarified before a deal is concluded, he said, so that citizens can defend themselves should US authorities accuse them of being involved in terrorist activities.