New US Treasury Secretary Jacob Lew's trip through Europe this week has been advertised as a chance for him to get to know his counterparts in Brussels and capitals across the euro zone. But while smiles have been plentiful thus far, the visit has primarily served to highlight the deep philosophical gulf dividing the trans-Atlantic partners.

The US, Lew made clear on Monday in Brussels and again on Tuesday in Berlin, would like to see Europe finally ease up on its strict course of austerity to stimulate economic growth on the Continent. But EU leaders have made equally clear that leniency for deeply indebted euro-zone member states is definitely not in the cards.

"As we continue to address many of our long-term challenges, our economy's strength remains sensitive to events beyond our shores," he said in a press conference following his Tuesday meeting with German Finance Minister Wolfgang Schäuble. "We have an immense stake in a prosperous Europe."

Lew seemed disinclined to go further in Berlin, preferring instead to emphasize areas of agreement between the US and Europe. But his message was clear. He had spelled it out on Monday in Brussels, saying, "I was particularly interested in our European partners' plans to strengthen sources of demand at a time of rising unemployment."

Rarely will a visiting diplomat be more direct. Washington, Lew was implying, strongly believes that far-reaching austerity plans adopted by many countries in the euro zone in response to the four-year-old crisis are to blame for the Continent's moribund economy.

As if to underline the concern, more negative news was forthcoming on Tuesday when Germany's Federal Statistical Office announced that German exports -- the key driver of the country's economy -- fell further than expected in February. Trade abroad fell 1.5 percent from January and 2.8 percent in comparison to February 2012. Tellingly, the greatest drop was in exports to other euro-zone member states, a reduction of 4.1 percent relative to last February.

Despite the strong message from Washington, however, Europe has made abundantly clear this week that it has no intention of straying from the path of austerity. European Council President Herman Van Rompuy, who met with Lew on Monday, acknowledged that there "is a vivid debate about fiscal policy and the pace of fiscal consolidation" between Europe and the US.

But, he added: "The European economies face a high level of debt, deep structural medium-term challenges and short-term economic headwinds that we need to confront. There is no room for complacency."

Events over the weekend would seem to underline the earnest talk from Brussels. Last Friday, Portugal's highest court threw out the country's budget due to what it found were excessive cuts to compensation packages for public servants, specifically reductions to holiday bonuses and other perks. The ruling sent the government of Prime Minister Pedro Passos Coelho scrambling to make cuts elsewhere to plug the €1.3 billion budgetary hole torn open by the court ruling.

It also sent European leaders searching for their whips. "Any departure from the (austerity) program's objectives, or their re-negotiation, would in fact neutralize the efforts already made and achieved by the Portuguese citizens, namely the growing investor confidence in Portugal, and prolong the difficulties from the adjustment," read a European Commission statement issued on Sunday.

Lew on Tuesday avoided comment on Portugal, focusing instead on trans-Atlantic consensus. "Our common position is of growth-friendly consolidation or of sustainable growth, however you want to call it," the US treasury secretary said.

Still, he did allow himself one apparent criticism of his host. "The driver for economic growth has got to be consumer demand," he said, echoing the message of his predecessor Timothy Geithner. "Policies to help to encourage consumer demand in countries that have the capacity would be helpful."

Lew, almost certainly, was referring to Germany. Schäuble, however, was unperturbed. Economic stimulus and budgetary consolidation, he said, were not mutually exclusive. In other words, the trans-Atlantic disagreement isn't likely to be resolved any time soon. 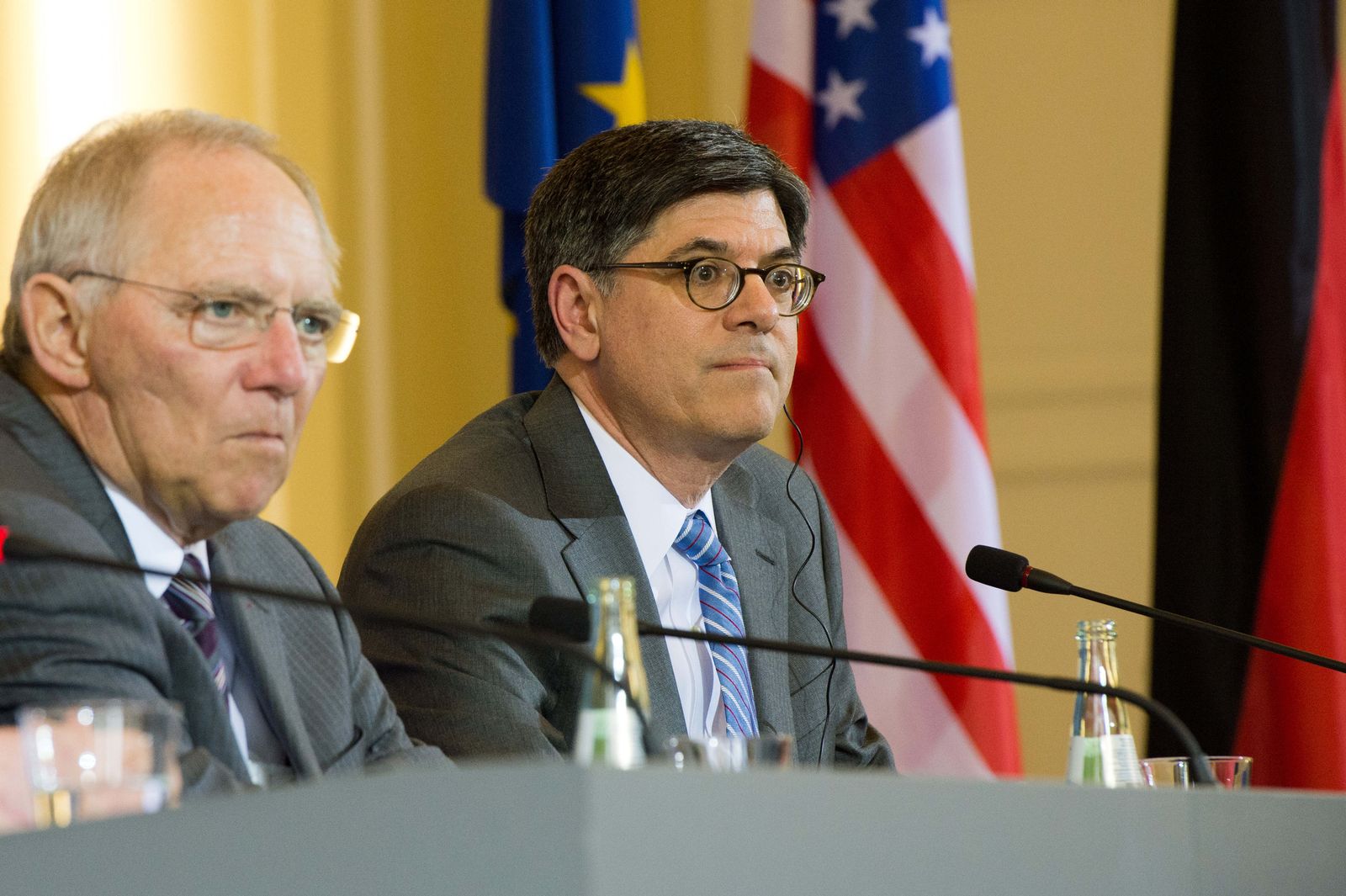 German Finance Minister Wolfgang Schäuble together with his US counterpart Jacob Lew on Tuesday in Berlin.