Finance ministers from countries belonging to Europe's common currency zone have agreed on an emergency plan for debt-ridden Greece. The 16 ministers met in Brussels Monday for a meeting that went on late into the evening. It wasn't until 10 p.m. that the head of the euro group, Luxembourg Prime Minister Jean-Claude Juncker appeared and announced that they had agreed on an emergency plan for Greece. "Greece would be supported if this would be needed," Juncker told reporters.

The finance ministers have essentially confirmed what EU leaders have been indicating for some time, namely that the other euro zone members will not leave Greece in the lurch.

Juncker did not go into specifics about the plan. The finance ministers agreed to provide bilateral aid to Greece in an emergency, he said, adding "there are still a number of technical questions that need to be addressed." The scope of the relief package was left open. But it is precisely those details that are crucial. If financial markets had been hoping for a concrete figure, they were left disappointed -- a fact that could further pressure the euro, which has been trending downward for months.

Doubts about the Details

Juncker's appearance on Monday night was less a promise for the future than a signal that the euro zone's finance ministers were unable -- or unwilling -- to reach an agreement. Now EU leaders will have to decide on the details of the rescue package at their next summit on March 25-26. But there are also doubts about whether that meeting will see concrete pledges of assistance. On Monday evening, Juncker sought to lower expectations of the summit, saying that, although EU leaders had to make the final decisions, they would not necessarily do so at the end of March.

The finance ministers are playing for time. Although EU diplomats say that a detailed emergency plan has already been drawn up in Brussels, which envisions loans totaling €25 billion ($34 billion) for Greece and which only needs the OK from EU leaders to go into effect, finance ministers are clearly hoping that the financial markets can be seduced in the mean time with pledges that Greece will be supported should the need arise.

It is a difficult balancing act the EU has embarked on. Speculators need to be deterred -- and pressure must be maintained on problem countries to clean up their finances. The euro zone on Monday wanted to send the message that everything is under control, without making unnecessary concessions to the Greek government. After all, Athens' will to save money should not weaken.

Putting Off the Pain

The finance ministers also highlighted the fact that Greece has not yet asked for help -- but if it were to do so, there would be enough money available in the rest of the euro zone. It's the same line the EU has been preaching since the beginning of the Greek crisis: In an emergency, the other euro countries would save Greece from bankruptcy. But the rescue package can not be called a "bailout," because that is prohibited by the Maastricht Treaty, which governs the European currency union.

But constantly postponing the decision does not make it any easier. Sooner or later, the euro-zone members will have to answer the question of who will provide money for Athens, and how much. Around €20 billion of Greek debt will come due in April and May alone. So far, the Greek government has been able to get by on its own and has always managed to refinance its loans on the financial markets. A recent issue of Greek government bonds sold well -- albeit at the cost of significantly higher interest rates, something which ultimately only exacerbates the debt problem.

The other euro zone members seem to be waiting until Greece's need for additional financing becomes acute -- and until the pressure to act becomes so great that helping Greece can be sold more easily to their own skeptical populations. Until that happens, details remain wanting. German Chancellor Angela Merkel in particular has been holding her cards close during the financial poker game in Brussels.

Not on the Agenda

At their meeting Monday, the euro-zone finance ministers also discussed two fundamental issues that were not on the agenda. One of them was raised by German Finance Minister Wolfgang Schäuble in recent weeks when he called for a European Monetary Fund. The second issue was brought up by French Finance Minister Christine Lagarde, who in an interview with the Financial Times Monday, criticized Germany's trade surplus and added German competitiveness to the list of Europe's problems -- statements that brought her immediate criticism from Merkel.

Schäuble's proposal had already been dismissed by his colleagues in recent days as a long-term project. The consensus was that such a fund wouldn't be ready in time to help Greece. There was no new impetus regarding the plan at the meeting on Monday evening.

Lagarde's criticism of Germany also found little support. Her attitude may be shared by many countries whose economies are suffering from German exports, and Germany's export strength has certainly also added to Greece's problems. But German companies are hardly likely to choose to be more expensive and slower, just so their international competitors can catch up. Complaints about German and Chinese exporters are a perennial issue in the international debate on trade imbalances. Sensible suggestions for how to solve that problem, however, are in short supply. 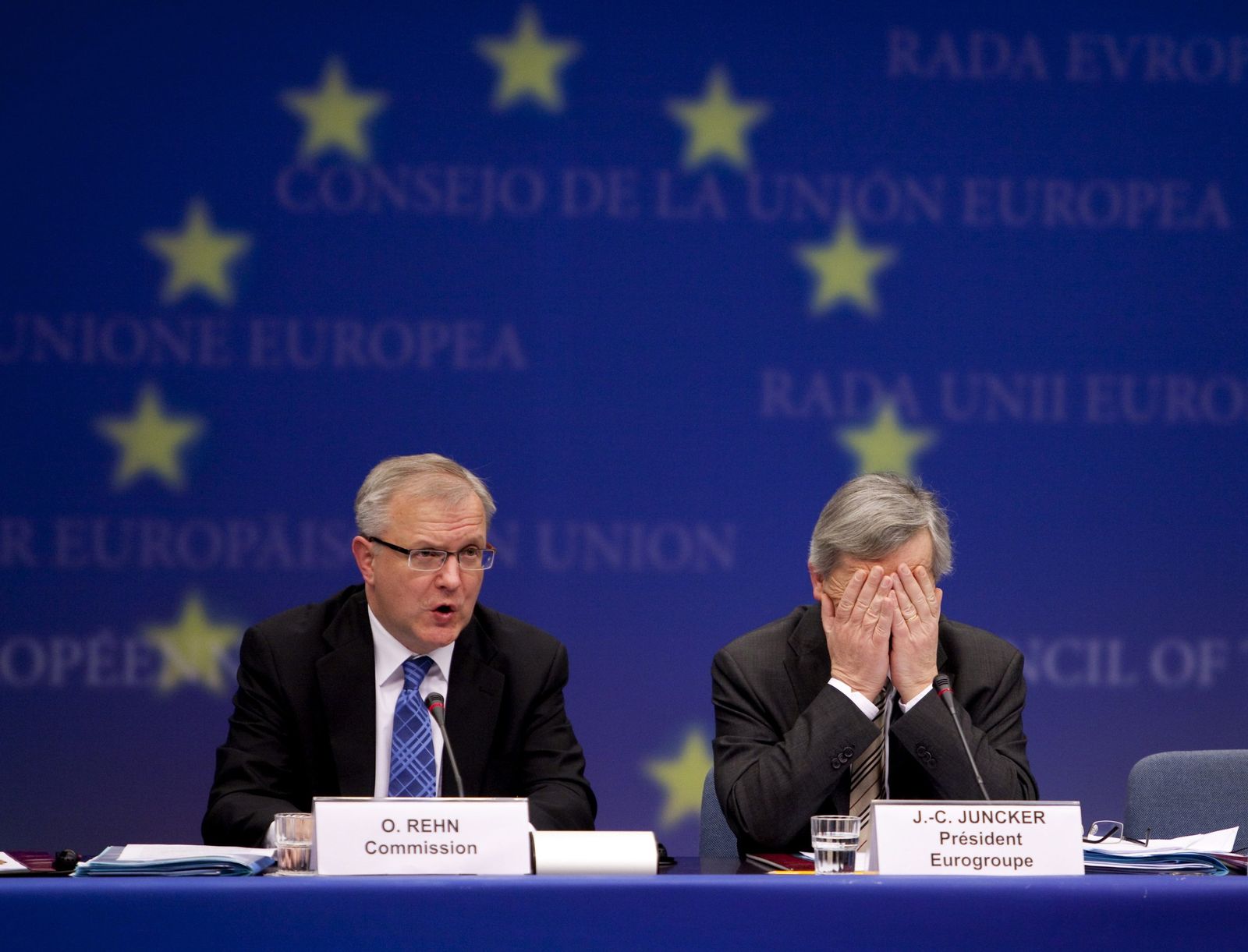