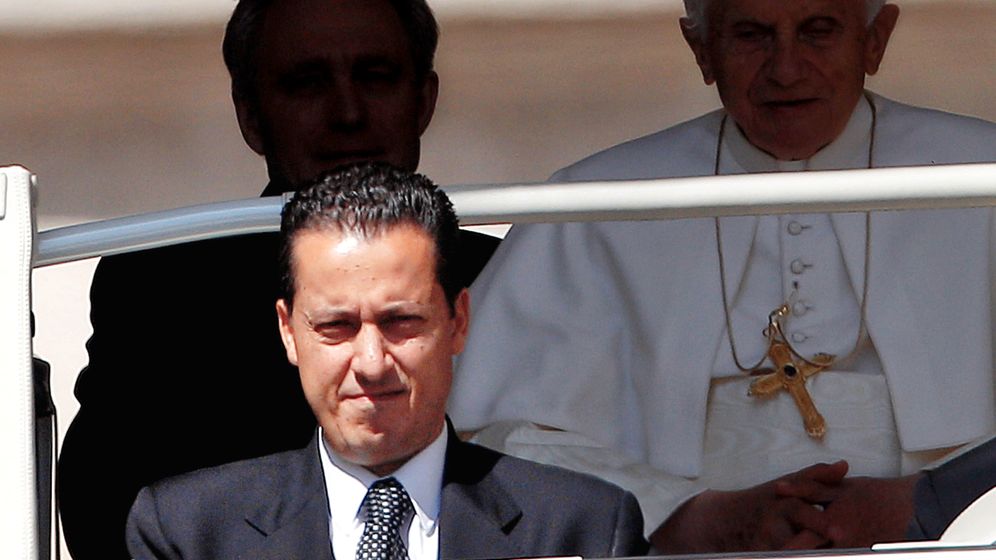 Do the two know each other? Is one the other's source? Could it be that they teamed up to harm the German-born head of the Catholic Church, Pope Benedict XVI?

Few others in Rome have been the object of such intense speculation recently as these two men. But, as chance would have it, despite their physical proximity, they probably won't be running into each other any time soon.

One of them is looking out of a 4 meter (13 foot) by 4 meter detention cell in a Vatican police station on the wall surrounding the papal state. He has been sitting there for almost two weeks now, and almost everyone knows his name: Paolo Gabriele, the pope's 46-year-old personal butler.

Since then, Gabriele has been viewed as a traitor and called "il corvo," the raven, an animal known for its thieving disposition. His lawyers say he will finally submit to formal questioning this week -- and that he is prepared to tell all.

Is this merely the climax of the so-called "Vatileaks" scandal, which has been smoldering since January, when a series of secret documents began coming to light? Or is it just the beginning? There's no doubt that this flood of paper out of the Vatican is a sign of what the Italian weekly magazine Panorama calls one of the "worst crises in the history of the Holy See," or what Vatican spokesman Rev. Federico Lombardi has described as a "difficult test" for the pope.

In any case, it is a crime story that not even Dan Brown could have better concocted -- but one in which Gabriele is possibly just a marginal figure because Vatican officials are still searching for the true masterminds behind the scandal.

Indeed, they appear to remain at large. Despite the butler's arrest, the leaks continued over the weekend. While the pope was on a three-day trip to Milan, Italian paper La Repubblica published Vatican documents on Sunday that included two bearing the signature of his secretary.

After the most recent events surrounding the match-fixing scandal involving Italy's national football team, Italian Prime Minister Mario Monti suggested simply suspending play in the country's premier league, Serie A, for two to three years. Many Romans found that this wasn't a bad idea in principle -- but one that should be applied to the Church rather than to football. Close the Holy See, they agree, but not the stadiums.

But the Vatican is on the defensive. During his general audience on May 30, Benedict made his first public comments on the Vatileaks scandal and said he continues to support his Vatican colleagues, loyal and disloyal alike. Archbishop Angelo Becciu, the Vatican's undersecretary of state, a position equivalent to an interior minister, even told the Vatican newspaper L'Osservatore Romano that he considered the publication of the confidential letters "an immoral act of unheard-of gravity" and encouraged journalists "to take a clear step back from the initiative of a colleague whom I do not hesitate to call a criminal."

This colleague is Gianluigi Nuzzi. In the Vatican's eyes, he is clearly the real culprit behind this affair. The well-known investigative journalist had already uncovered corruption and money-laundering at the Vatican bank in his 2009 book "Vaticano S.p.A." or "Vatican Ltd." Now the Vatican is threatening him with legal action for his most recent work, "His Holiness: The Secret Papers of Benedict XVI," released on May 18. Several days later Vatican Bank chief Ettore Gotti Tedeschi was dismissed from his post for dereliction of duty. Media reports said that leaked memos indicate differences over financial transparency policies within the Vatican.

A Unique Window Inside the Vatican

Nuzzi just happens to be staying at the Hotel Ambasciatori on Rome's Via Veneto, just a short walk from the Vatican police station. The street was once famous for its dolce vita back when star director Federico Fellini was still alive and when neither Italy nor the Vatican was afflicted by crises.

Two cell phones on the coffee table in front of Nuzzi are ringing. His colleagues report that a politician is calling for his arrest. Every few minutes, he is approached by fans looking to have their copy of his book signed, including people who work at the Vatican nearby. They whisper and puzzle over Nuzzi's mysterious sources.

Although some of the documents are far from overwhelming, Nuzzi's revelations open a unique window onto the inner workings of the Vatican and furnish proof of how the game of politics is played in the domain of the Holy Father. They show that, just like elsewhere, there are lies, intrigues and bitter feuds between rival parties.

A few of the more than 30 faxes reveal banal aspects of the pope's everyday life, such as celebrities' offers of donations and requests for an audience. One document shows the pope's bank account number. Indeed, it was reportedly this document that put the pope's private secretary Gänswein onto Gabriele's trail in his investigations, since only Gabriele could have had access to it.

However, other documents are more explosive. For example, there is a memo the pope sent to the Vatican's ambassador in Berlin, in which he gives the ambassador permission to complain to Chancellor Angela Merkel about criticizing Benedict's behavior in the affair surrounding the controversial Catholic splinter group, the Society of St. Pius X (SSPX). But, for the most part, the book contains letters critical of Tarcisio Bertone, Benedict's No. 2 as the Vatican's secretary of state. Bertone is alleged to have made accusations against an archbishop with a reputation for wanting to clean things up, which led to the archbishop's being promptly transferred to another position as a punishment.

Nuzzi says he isn't afraid of any legal actions and that his work was carefully and meticulously researched. Of course, he won't disclose his sources, preferring instead to call them by the collective name "Maria." Indeed, the story of how he came into contact with Maria reads like a thriller, like the meetings that journalists Carl Bernstein and Bob Woodward had with their "Deep Throat" source in a Washington parking garage while investigating the Watergate scandal.

Nuzzi claims that he met with two intermediators last year who examined his trustworthiness and drove him to an empty apartment in Rome's Prati neighborhood after taking a circuitous route. There, he says he was asked to sit down in a plastic chair opposite his main source, who Nuzzi stresses "never took even a single cent for it." He confirms that "Maria" was actually several individuals and says that the people who gave him the documents "knew what they were doing."

Nuzzi says that the individuals with whom he was in contact from the Holy See were frustrated about the intolerable culture of secrecy and cover-ups in the Vatican, and that was their motive. He says he hopes to spark a debate, a perestroika -- though it all sounds a bit far-fetched and naïve.

His book is by no means about pope-bashing, Nuzzi adds. On the contrary, he views the pope as a revolutionary, as he believes Benedict XVI wants to bring some transparency to the business dealings of the Vatican bank and has combated child abuse more than any of his predecessors. In fact, he hopes that his disclosure will protect the pope, or at least he claims as much. But in reality, Nuzzi is harming the pope because the documents mainly reveal one thing: Benedict XVI's weakness as a leader.

"The most shocking thing was seeing just how lonely this pope is and how much trouble he is having keeping the shop together or getting information owing to all the filtering and intrigues surrounding him," Nuzzi says.

The questions have yet to be answered about who slipped Nuzzi the documents and who was keen for the world to find out about the allegedly deplorable state of affairs within the Vatican. Nevertheless, there is much speculation on St. Peter's Square and during the now daily press conferences in the Sala Stampa attended by the embarrassed papal spokesman and the various Vatican watchers who have to file several pages' worth of reports about the palace intrigues in the court of Benedict XVI on a daily basis.

These speculations often have something to do with power struggles between senior Italian Church officials intent on putting their favorite candidates in good positions for the next papal election. Others speculate that it involves a conspiracy against Bertone, the No. 2 official in the Vatican and confidant of the pope, whom many view as excessively high-handed. Supporters of this theory point to the fact that, in the wake of the recent child-abuse scandal, there was already a period in which even people within the Church were calling for Bertone's dismissal.

More than anything, the Vatileaks scandal and Nuzzi's disclosures demonstrate that it continues to be difficult to bring the inner political workings of the Vatican into the public light. In this sense, little has changed behind the walls of the Holy See.

In fact, Gabriele is not the first spy to be exposed there. In what is now an almost forgotten case, there was another raven who ironically worked for another pope who had chosen the pontifical name Benedict. Rudolf von Gerlach, the papal chamberlain, tried to thwart the policies of Benedict XV, who was intent on safeguarding the Church's neutrality during World War I.

Von Gerlach, who enjoyed considerably more influence than Gabriele, a simple butler, fostered excellent ties with Germany and its allies. While he was accused of treason, Benedict XV was caught in the crossfire and viewed himself as a victim of an anti-clerical conspiracy.

And what happened to von Gerlach, the raven? Though sentenced to lifelong imprisonment, he was eventually released. He then lived in Switzerland, where he abandoned the priesthood, lived an extravagant life and nurtured extremely close ties with the pope in Rome for the rest of his life.

In other words, being briefly detained in the Vatican's dungeon doesn't necessarily mean the end of one's career.