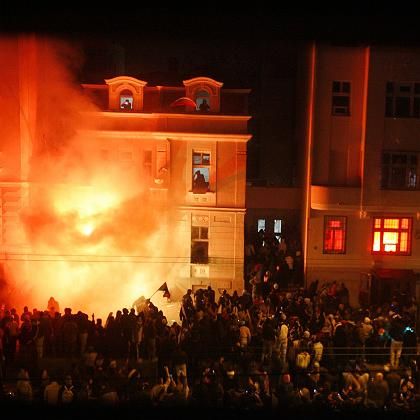 Protesters set the US embassy on fire in Belgrade Thursday.

One person is dead after Serbian rioters stormed the United States embassy in Belgrade and set it on fire.

Dozens of protestors, many with their faces masked, broke into the embassy in the Serbian capital on Thursday, venting their anger at Kosovo's independence and chanting "Serbia, Serbia." They trashed rooms, ripped down an American flag and set the building on fire before riot police broke up the mob. The United States has been a strong supporter of Kosovo's efforts to declare independence from Serbia, and its embassy had been closed after stones were hurled at it on Sunday.

The violence followed a state-backed rally by up to 200,000 Serbs protesting Kosovo's newly declared independence. Rioters also damaged other embassies, including those of Germany, Croatia and the UK, and vandalized several shops and banks. No police were present when the violence began, according to reports.

A charred body was later found inside the embassy. It has not yet been identified, but is believed to be of a protestor, as the embassy said all its US staff were accounted for. According to hospital officials, around 150 people were injured in street violence, including 32 police.

The US State Department strongly condemned the attack on the embassy, with spokesman Sean McCormack saying a formal protest had been lodged with Serbia. McCormack said the US would "hold the Serbian government personally responsible for the safety and well-being of our embassy employees." The US on Thursday accused Serbia of not providing sufficient security at the embassy and of having taken too long to respond to the violence. US officials claim it took two hours for Serbian security forces ro arrive at the embassy.

White House spokeswoman Dana Perino was particularly outspoken in her reaction. "Our embassy was attacked by thugs," she told reporters. The UN Security Council issued a statement late Thursday saying that it condemned "in the strongest terms the mob attacks against embassies in Belgrade."

The European Union's top diplomat, Javier Solana, said these "acts of violence lead nowhere and they cannot help anybody." He also counselled the Serbs to provide protection for diplomatic posts in Belgrade. "The embassies have to be protected, that's the obligation of a country," he said. He added that talks on the signing of a "stabilization and association agreement" that could pave the way for eventual Serbian EU membership would be halted until things "calm down."

Rioters also attacked the German embassy and broke windows, according to eyewitnesses. A spokesperson for the German Foreign Ministry in Berlin confirmed that property had been damaged but that no protesters had made it inside the building.

Expressing the German government's deep concern over the situation in Serbia, Foreign Minister Frank-Walter Steinmeier contacted Serbian officials on Thursday evening to demand that they provide security for the embassies and restore calm in the Serbian capital.

In addition to the embassies, protesters also vandalized and looted foreign businesses, including McDonalds and Nike.

There has been widespread anti-Kosovo sentiment in Serbia since the province, which Serbia considers its historic heartland, declared independence on Sunday.