Chicago is interested, and so is Moscow. Geneva and Sydney are in negotiations, and the mayor of London has called by twice. All eyes are on Paris. But what is the big attraction? It's a brand new model of bicycle, one that can be seen teeming through the streets by the thousands, all the same chic silver-gray, with a dolphin-like design. And they are all rented.

Paris has suddenly become the world capital of bike rentals. Nowhere else in the world has quite so many rental bikes standing at the ready: there will soon be over 20,000. And the fleet is really being put to use: commuters pedal from the Metro to the office, managers pop out in their lunch breaks to pick up groceries, tourists zigzag in every direction. More than six million rides have been clocked up in just three months -- there is hardly a faster way to get through the legendary tangle of the French capital.

What the French call "la Vélorution" was launched on July 15 this year and it was an advertising company that came up with the idea.

JCDecaux, the world's second biggest outdoor advertising company, has established 750 computer-aided rental stations throughout the city and that number is expected to almost double this year to 1,460. (In comparison, the Metro has just 300 stations.) The company designed rock-solid bicycles and had them built in Hungary, and it operates the entire network at its own expense. In return, JCDecaux gets the exclusive rights to sell advertising on the city's 1,628 urban billboards for the next 10 years.

The deal provides a lot of benefits for customers. They pay a minimal basic fee: €1 ($1.45) per day, €5 per week, and just €29 for the entire year. Once the customer is signed up they can take as many short trips as they wish. The bike can be returned to any station and the first half an hour is free -- after that the price rises steeply.

And the message has gotten through loud and clear: more than 80 percent of all rides up to now have been free. And the fleet is getting optimum use, with every bike being rented on average 10 times a day.

In summer it is tourists first and foremost who take advantage of the service, but Parisians themselves are also increasingly embracing the idea. Around 100,000 people have already taken out annual subscriptions to the Vélib rental scheme.

The network of parking stations is so dense that, as a rule, at any time the nearest station is barely 300 meters (984 feet) away. Even those who own bicycles could feel tempted to leave them at home when they only need to make short trips. After all it can cost €29 just to change the chain on a bicycle. And a rental bicycle never even needs to be oiled -- a bike-servicing boat belonging to JCDecaux chugs up and down the River Seine, collecting bicycles in need of maintenance.

It was his 70-year-old father Jean-Claude who had the idea back in the 1960s of combining municipal advertising with the provision of services. Since then JCDecaux has seldom been at a loss for original ideas when it comes to getting advertising rights from cities. In return the company has provided the cities with self-cleaning public toilets or illuminated signs that show when the next bus will arrive at a stop.

But rarely has an offer, particularly for local governments so plagued by traffic, seemed as inviting as bike rental does now. "In a few years all Frances big cities will have this," asserts Jean-François Decaux. Marseille signed up recently and Toulouse is due to follow.

Lyon already has JCDecaux rental bikes. In Brussels, Vienna and Seville there are some in use, although with far fewer stations. Thats set to change: Paris has shown that the density of the network is key.

This great success comes at a time when the world seems to be suddenly well-disposed toward the idea of rental bikes. There is hardly a major city that has not started to make plans. The US company Clear Channel Outdoor has supplied Oslo, Stockholm and Barcelona with rental bikes. And Beijing wants to trump Paris, though under its own steam: 50,000 rental bicycles have been announced for the Olympic Games in 2008.

In Germany things are proceeding at a more unhurried pace. The German state rail company Deutsche Bahn has seen solid business with its own rental scheme, the rather uninspiringly named "Call a Bike." The program started in Berlin, Frankfurt, Munich and Cologne, and Stuttgart and Karlsruhe have now joined in. There are 4,500 bikes in use and payment is by the minute, currently 8 cents. 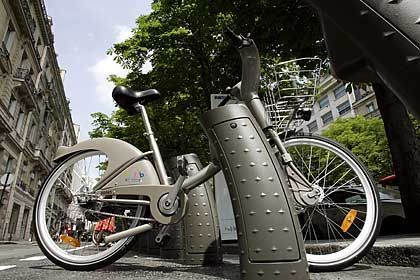 The Velib self-service bike is a big hit in Paris.

The newcomer Nextbike in Leipzig, which finances its small fleet partly through advertisements on the bicycles, is satisfied with business so far -- it even wants to establish a branch in New Zealand.

Both German corporations get by without parking stations. The customer can leave the bike on any street corner -- which is convenient for that customer but a pain for the next one, who never knows precisely where to find a bike. In Stuttgart, Deutsche Bahn is trying the station principle for the first time, but the customer is still required to order by phone: even the shortest trip requires a call at the beginning and end of the bike ride to the call center in Halle. Competitor Jean-François Decaux doesnt think much of this method. "That doesnt work," he says. "Deutsche Bahn got a total of 520,000 rentals that way last year in four German cities. We do that in Paris in just three days."

The system in Paris is much simpler. The customer, having registered once, takes his or her access card to the station and checks out a bicycle from a post there. Readers in the posts or at a computer terminal automatically register every transaction and pass on the data to the control center. The cyclist can almost forget that the bike isnt actually their personal property. The cost of this convenience is, however, enormous. JCDecaux has hired 350 employees for the rental scheme, 50 of whom are occupied exclusively with riding the bikes from one station to another to keep up with demand. The overall annual cost comes to around €2,500 per bicycle. At least, thats how much the corporation charges a city that wants to take on the rental service without granting advertising privileges in return. "With advertising," says Jean-François Decaux, "of course its completely free for the city."

Free it may be, but is it cheap? The city gives up advertising revenue of an unknown value: this is pocketed by JCDecaux. In Paris the company anticipates sales of €600 million over the course of the 10-year contract.

Would it not be a better deal for a city simply to sell its advertising rights for money, and to the highest bidder? With the revenue it could then pay for a bike rental service or any other programs -- and in the end, if possible, have a tidy sum left over. When it comes to package deals like this one, that suspicion always lingers.

And this is what has led to a change of policy in Hamburg. The contract for 15 years of outdoor advertising in the city was up for tender. Up until then JCDecaux had held the rights; the company bid again -- this time with a bicycle rental scheme. The Ströer Group from Cologne teamed up with Deutsche Bahn and promised to bring Call a Bike to Hamburg, while Berlin entrepreneur Hans Wall pulled out all the stops with an offer of 500 collection posts for dog droppings including a force of 30 men in uniform. As a bonus he offered colorfully illuminated designer bus shelters.

Hamburg made its decision in October: from now on JCDecaux and Ströer are to split the advertising rights, and in exchange Hamburg will receive a total of €508 million. The city will then hold a separate tender process for a bike rental scheme at the beginning of next year, independent of the advertising companies. Jean-François Decaux is undeterred: "We will bid for that too."