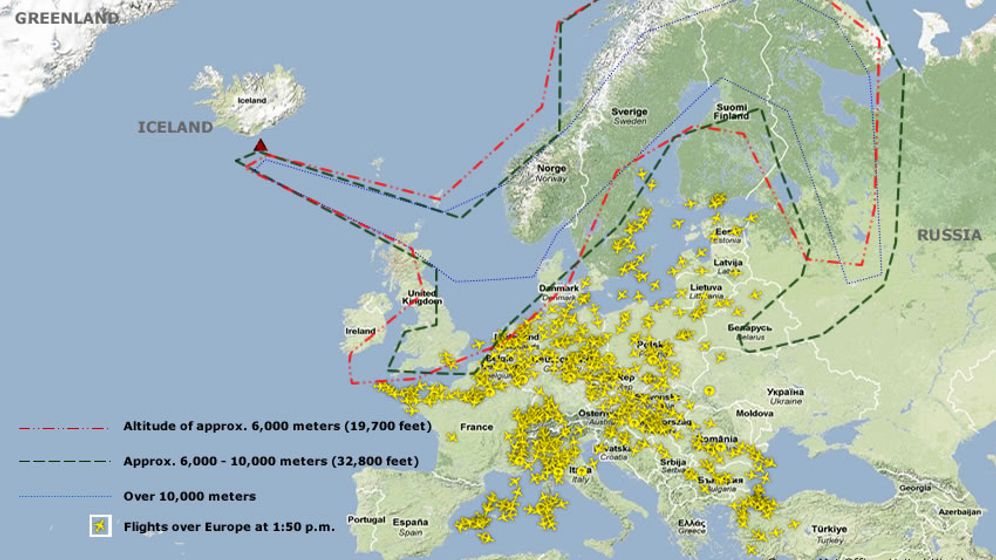 The Netherlands-based European Organization for the Safety of Air Navigation, or Eurocontrol, says the flight cancellations represent the most serious interruption of plane traffic in the history of air travel. Because of a massive ash plume from a volcano under the Iclandic glacier of Eyjafjallajökull, which erupted Wednesday, around one-quarter of all flights in Europe have been cancelled.

Some 28,000 flights depart daily from European airports. Eurocontrol estimates that air traffic will be affected for another 48 hours.

On Thursday afternoon airspace over Iceland, Great Britain, Ireland and several Scandinavian countries was fully closed. Air traffic over Belgium and the Netherlands has also been reduced and was expected to stop completely between 4:30 p.m. and 7:00 p.m. Flights over the Atlantic have been re-routed to the south in order to avoid the plume.

So far German air traffic is unimpaired, according to Peter Ramsauer, Federal Minister for Transport. Closing German airspace is not expected to be necessary, and any important measures for German flights will be announced over a weather warning system.

Eurocontrol and an organization called German Flight Safety (DFS) have been in contact with colleagues in neighboring countries and with meteorological groups. They're treating the situation as a massive weather phenomenon. The Transport Ministry says information handed to pilots includes possible alternative routes, but the final decision still lies with the pilots themselves.

Early on Thursday there was confusion over reports from Eurocontrol. The agency first announced that it would close German as well as Dutch and Belgian airspace at 2 p.m. German Flight Safety, however, denied the report. "German airspace is unaffected for now," said spokeswoman Ute Otterbein from the group's office in Langen near Frankfurt. 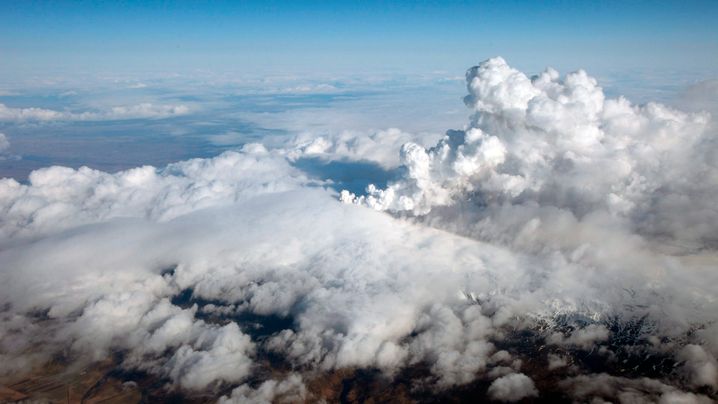 A short time later, a Eurocontrol spokeswoman in Maastricht announced: "There was no decision to close the airspace, despite what we said this morning. But that doesn't mean that it will not happen. The member states have to make the decisions."

The transportation ministers of each European country are responsible for decisions on whether or not to close their airspace. Eurocontrol only coordinates international air traffic movements in events when the airspace is closed. The agency, moreover, is responsible for only a small part of German airspace. "International flights that would normally travel through British airspace can be diverted in another direction," a Eurocontrol spokeswoman told SPIEGEL ONLINE.

A spokesman for Lufthansa, Germany's flag carrier, told SPIEGEL ONLINE the situation had been "very serious" for air travel, but also warned against panic. He said that while flights to Britain and Scandinavia had been cancelled, the impact on trans-Atlantic flights to the United States and Canada using North Atlantic routes had been limited. "The airplanes can simply fly around the affected areas and still arrive in New York a few minutes later," the spokesman said. "It's no real drama."

Germany's second-largest airline, Air Berlin, reported cancellations of around 20 flights. A spokeswoman for the airline said all its flights to and from London, Copenhagen and Oslo had been cancelled.

In Britain, the ash plume brought all airports to a standstill. The country's National Air Traffic Services (NATS) closed all of Britain's airspace from 12 p.m. local time and said it would remain closed until at least 6 a.m. With the exception of emergency flights, all aircraft have been prohibited from flying in or out of the United Kingdom, NATS officials said Thursday.

At airports in Ireland, officials also said it was likely that plans to reopen airports by 6 p.m. would likely be abandoned. All airports in London were closed at noon on Thursday, including Heathhrow, one of the world's most important hubs. The airport processes 1,300 flights and 180,000 passengers each day. Officials in Scotland moved to close airports there even earlier in the day. NATS officials said it was the first time that the UK's entire airspace had been closed.

British Airways has cancelled all flights until Friday and is not sure when it will resume normal flights thereafter. It has announced that passengers will be able to either request reimbursement for missed flights or book new ones.

Weather experts predict that the Eyjafjallajökull eruption will affect air traffic in Germany until the weekend. According to Andreas Beck, a meteorologist with Germany's national meteorological service, there will be an ash cloud over Bremen and Frankfurt until Thursday evening that might remain there for a day. The cloud is expected to stretch as far south as the Rhine-Main region around Frankfurt, but Munich is not expected to be affected. As the ash cloud travels east, its concentration of particulate matter will dissipate.

Since the eruption on Wednesday, winds have been pushing the ash cloud away from Iceland and toward continental Europe. During the journey, weather experts say that it has split off into two clouds, with one heading toward Scandinavia. They predict that ash clouds will remain over Germany, Sweden, Finland, Norway, Poland, Great Britain, Belgium, the Netherlands and northern France until Friday morning. "Until then, the affected airspaces will undoubtedly be closed," Beck says, adding that this could last for between 12 and 24 hours.

Experts also say that the ash clouds, which are not visible from the Earth's surface, present no health risk. Still, they can be extremely dangerous for jet travel.

"Volcanic ash represents a significant safety threat to aircraft," British air traffic control service NATS wrote in a statement posted on its Web site. "If volcanic ash particles are ingested into a jet engine, they accumulate and clog the engines with molten glass," British vulcanologist David Rothery told the BBC.

For the time being, there is no way of saying just how long the eruption will last. Geologists in Iceland fear that the volcanic activity could even shake the nearby Katla volcano into activity. This volcano lies under a thick layer of ice. Were it to explode, geologists believe there could be significant flooding and explosive shocks. 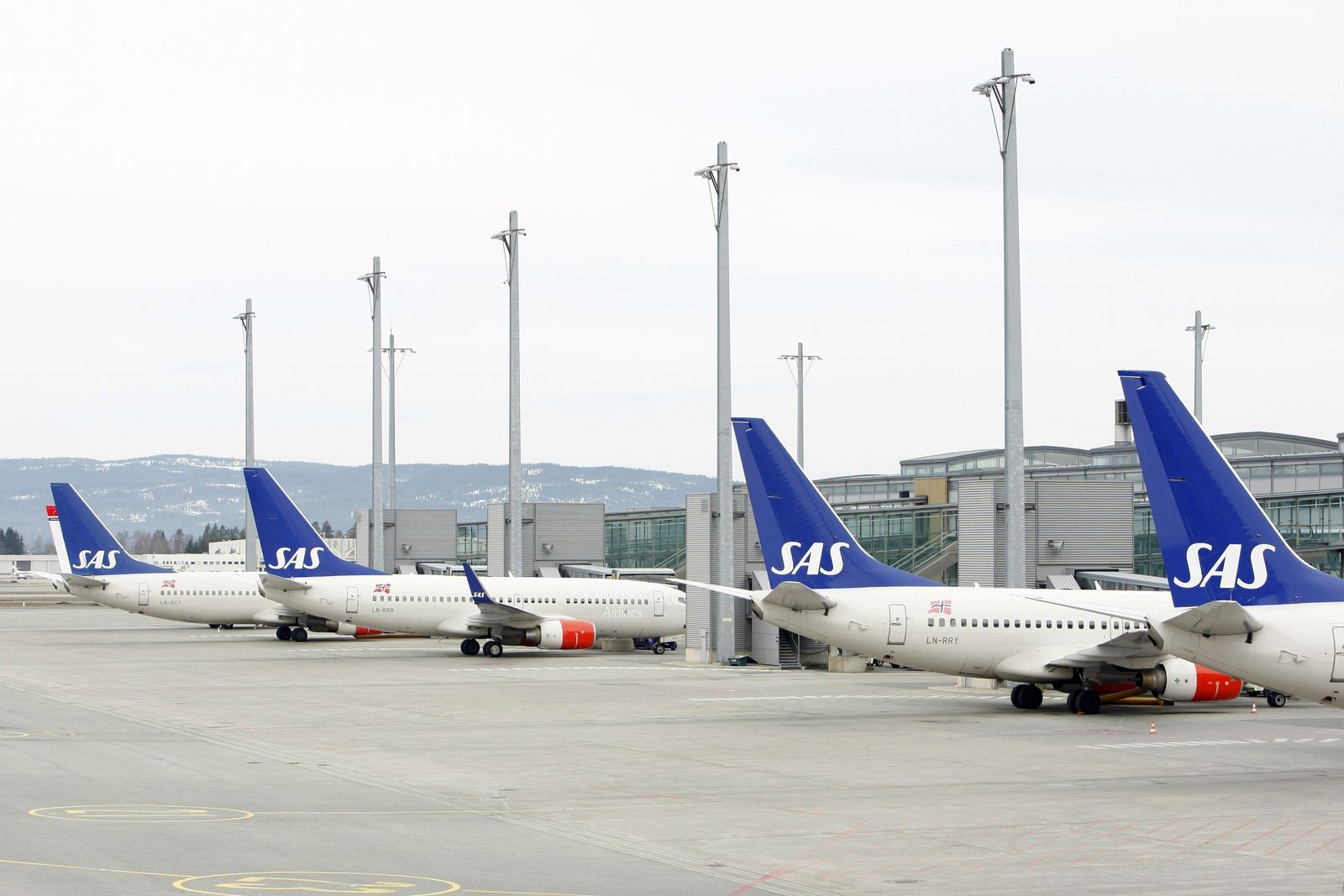 SAS planes stand on the tarmac at Oslo's Gardermoen airport Thursday after all flights were suspended.