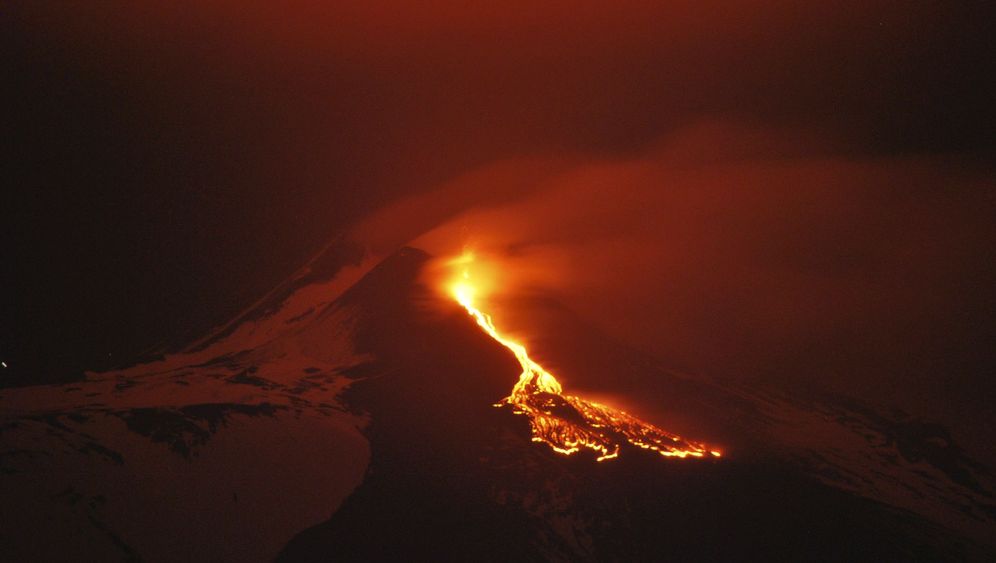 The volcano is raging. Fountains of lava, some taller than the Eiffel Tower, shoot from its mouth every few weeks, flowing in red-hot streams into the surrounding valleys. There have been 13 eruptions since the beginning of February.

Mount Etna, 3,329 meters (10,922 feet) high, towers majestically above the Sicilian city of Catania. In June, the United Nations Educational, Scientific and Cultural Organization (UNESCO) will decide whether to list it as a World Heritage Site. Etna is considered the most heavily studied volcano in the world, and it is thoroughly wired with sensors. In addition to lava, Etna spits out vast amounts of data -- several gigabytes a day, coming from magnetic field sensors, GPS altimeters and seismic sensors.

Despite this wealth of data, Etna still poses a conundrum to scientists. "The eruptions in recent weeks have been unusually fierce and explosive," reports German volcanologist Boris Behncke, who monitors the mountain together with a few hundred colleagues at Italy's National Institute of Geophysics and Volcanology (INGV). "There have been lava fountain events in the past, but rarely in such rapid succession."

Behncke has fallen under Etna's spell. During the day, he maps the lava flows; at night, he hikes along its slopes. His Twitter hash tag is "@etnaboris." The volcano is the first thing he sees when he looks out of his bedroom window every morning.

"This time, the range of ash fall is much wider than usual," says Behncke. A layer of black ash covers cars as far as 50 kilometers (31 miles) away.

Even in ancient times, people marveled at the forces that were capable of shooting fountains of lava into the sky. In Greek and Roman mythology, the volcano is represented by a limping blacksmith swinging his hammer as sparks fly. Legend has it that the natural philosopher Empedocles jumped into the crater 2,500 years ago. What he found there remained his secret, because he never returned. All that remained of him were his iron shoes, which the mountain later spat out.

A Champagne Bottle under Pressure

For many geologists today, Etna is still the most inscrutable volcano in the world. The mountain is located at precisely the spot where the African and European tectonic plates rub against each other like two giant ice floes. At this plate margin, lava with low viscosity flows upward from a depth of 30 kilometers into a reservoir of magma two kilometers beneath the summit.

"The stream of magma doesn't move uniformly, but in spurts, vibrating as if it were in a hydraulic pump," explains Stuttgart geophysicist Rolf Schick. "This makes Etna so unpredictable." Schick has been a star among volcanologists since 1972, when he caused a stir with his new discoveries about Etna. Using seismic sensors, he discovered a "pulse rate" of sorts in the stream of magma, which is forced through the vent at a rate of 72 beats per minute -- coincidentally, at a rate similar to that of the human heartbeat.

Schick spent 40 years traveling repeatedly to Sicily to explore Etna. "I used to believe that we would soon be able to predict volcanic eruptions," says the scientist, who turns 80 next month. "Today, I'm no longer certain that we'll ever succeed."

On one trip, Schick was traveling near the town of Nicolósi, which has been repeatedly destroyed by streams of lava. Based on the volcanic pulse he had measured, the geophysicist recognized that a molten heart was beating underneath him. The magma was only 400 meters beneath the surface, and an outbreak seemed imminent.

Etna is currently behaving like a champagne bottle under pressure. The magma, a foam-like brew of gas and red-hot molten rock, has been flowing to the surface more quickly in recent years.

"At the moment the mountain is more stable than it has been in 20 years," the scientist says. "But at some point in the not too distant future this will end and then, maybe within months or years, Etna will begin to prepare for the next flank eruption." Such an outbreak would be particularly destructive if it occurred on the southern or southeastern flank, Behnke says. "This is relatively normal for Etna, but society has changed tremendously. It's become much more difficult today to carry out an evacuation."