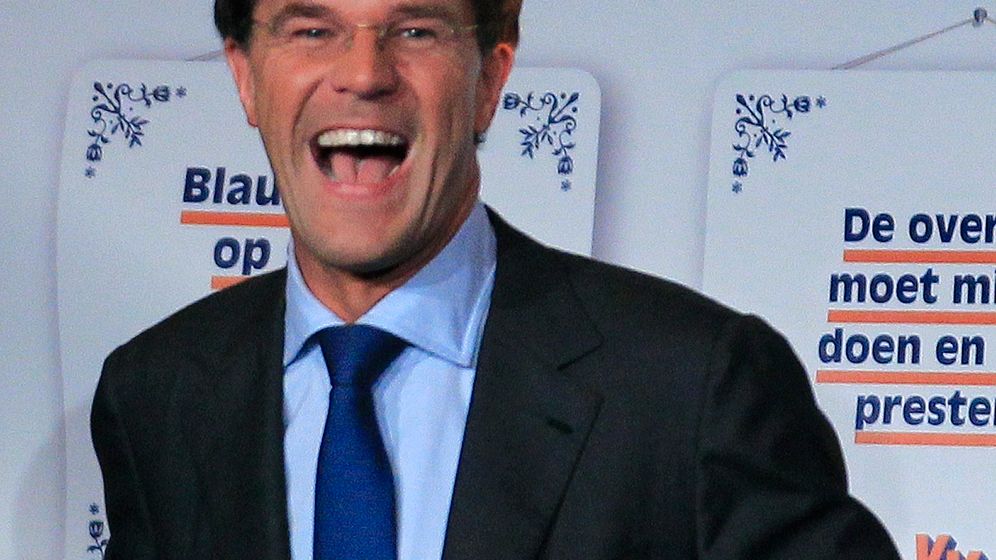 Photo Gallery: A Vote for Europe

The euro crisis had been the dominant theme in the run-up to Wednesday's parliamentary elections in the Netherlands. In the end, Dutch voters rejected euroskeptic parties and voted for a continuation of the current government's austerity-focused policies.

The incumbent prime minister, Mark Rutte, declared victory for his conservative-liberal People's Party for Freedom and Democracy (VVD) Wednesday night. Early Thursday morning, Rutte said his challenger, Diederik Samsom, of the center-left Labor Party (PVDA), had called him and congratulated him on his election victory.

According to preliminary results from Thursday morning, the VVD have won 41 seats in the 150-member lower house of parliament, with 26.6 percent of the vote. That gives them two more seats than the PVDA, which won 39 seats (24.7 percent).

Both of the two major parties were able to make greater gains than had been predicted in pre-election opinion polls. The Labor Party especially had seen significant gains in the days before the election.

Chances of a Stable Government

"Let us celebrate today," Rutte told cheering supporters in The Hague. "Tomorrow, we will get to work so we can form a stable cabinet as soon as possible." He also said he would help lead the Netherlands out of the crisis.

Rutte described the VVD's election victory as a vote of confidence in his government's policies. The result was a call on him to continue his work, he said. The VVD has so far supported the euro-crisis policies of German Chancellor Angela Merkel and drastic austerity measures.

The VVD and PVDA are now expected to form a coalition that will have a stable majority in parliament, with 80 seats between them, significantly more than the 75 seats needed for a majority. In the run-up to the election, Rutte and Samsom had not ruled out such a pairing, even if it is a marriage born of necessity rather than love. "We are ready to form a stable government," Samsom said.

Rutte said he would not yet comment on a possible coalition. Coalition negotiations can only begin once the official election results have been confirmed on Monday. Observers consider it possible that the social-liberal D66 party, which saw its support rise from 10 to 12 seats, may also join the coalition.

The Netherlands now seems to have a good chance of having a stable government for the first time in years. Wednesday's elections were the fifth in 10 years. The previous minority government of the VVD and Christian Democrats collapsed in April after just 18 months in power after Geert Wilders' Party of Freedom (PVV) withdrew its support for Rutte's austerity measures.

The main loser of the election was Wilders himself, the right-wing populist who is known for his anti-Islamic views and who had waged a euroskeptic election campaign. His PVV party won 15 seats, down from 24. On Wednesday evening, Wilders described the preliminary result as "a very big defeat." He added that his party would not give up, saying: "We will come back hard."

The Christian Democrats, which had been part of the last government, suffered a historic defeat. It won just 13 seats, eight fewer than in 2010.

Emile Roemer's Socialist Party, which has been critical of euro-rescue efforts, won 15 seats, the same result as in the 2010 election. It was a disappointing result for the Socialists, which had been leading in the polls for a period. Roemer had even been touted as a potential prime minister.

But the mood in the Netherlands had changed dramatically in the last few days before the election, with support shifting from the euroskeptics to the mainstream parties. Claes de Vreese, a professor for political communication at Amsterdam University, told the newspaper De Volkskrant that the election showed a deliberate choice against populists and in favor of future-oriented politicians who were capable of taking action.

One reason for the surprising result could be that 40 percent of voters were undecided right up to polling day. The Netherlands has around 12.7 million voters, and turnout on Wednesday was around 74 percent.

Swedish Foreign Minister Carl Bildt welcomed the election results. "Looks as if populist anti-Europeans are losing big time in Dutch election. Distinctly good news," he wrote in a Twitter message. European Commissioner Neelie Kroes, a member of the VVD, said it was a "fantastic result for the Netherlands and Europe." She added that her party could now build a cabinet that will be taken seriously in Brussels "because no anti-European party will be in power."

Moving Away from Merkel

But the new government faces major challenges. Economic growth is weak, health care costs are threatening to get spiral of control, and there is the danger of a real-estate bubble.

Although Mark Rutte will remain prime minister, the new Dutch government may take a slightly different course in the euro crisis. Up to now, the Netherlands has been a strong ally of Germany in fighting for the fiscal pact, austerity in the crisis-hit countries and budgetary discipline. But this position may soon change. Both Rutte and Samson have announced that they will not necessarily follow the German lead in the euro crisis going forward. They both want to move away from Angela Merkel's focus on austerity and granting more oversight to Brussels.

During the campaign, Rutte already announced that he wouldn't support giving more financial aid to Greece. He also spoke out against giving Brussels more power. Samson favors greater European integration but is against the current austerity-focused strategy. His party wants to fight unemployment through more investment.

Given these circumstances, the new government in The Hague looks set to pivot away from Merkel and more toward supporting the policies of French President François Hollande. That would leave only Austria and Finland as staunch allies of Germany.

With reporting by Benjamin Dürr in The Hague