Roberto Oligeri still lives in the small village in Toscana where his family was murdered. The killers marched into the hamlet on Aug. 19, 1944. Held at gunpoint, his father, who ran a small inn, was forced to serve Sturmbahnführer Walter Reder and his underlings a meal. As they dined on roast chicken and regional wine, soldiers from the 16th SS Mechanized Infantry Division combed through the village and surrounding area and rounded up women, children and a handful of old men. When Reder had finished his meal, he gave the order that all of them be killed.

"On that day, 160 people in our village were muredered, including my five siblings -- two brothers and three sisters. The oldest was 19 and the youngest just three," says Oligeri.

Neighboring villages experienced the same fate as SS troops beat, murdered and burned men, women and babies in that August of 1944. Some 560 people died in the mountain village of Sant'Anna di Stazzema on August 12 alone.

The crimes have never been atoned for nor have they been adequately addressed by the judiciary. An Italian court did sentence 10 of the SS thugs involved in the Sant'Anna di Stazzema massacre to life in prison in abstentia, but Germany never extradited them. And just recently, a court in Stuttgart refused to pursue the case, saying that murderous intent could not be proven.

It was a decision that enraged Oligeri as a slew of similar failures by the judiciary have enraged him before. He says that survivors of the massacre were left alone to deal with their pain and nightmares while the perpetrators returned home to a normal, peaceful life. He has pursued the case in multiple courts, but has never found success. He has also written endless letters to politicians and newspapers. "We don't want revenge," he says. "We want justice."

It might still be awhile before he gets it. On Wednesday, a new report was released on the crimes committed by Germany during its occupation of Italy shortly before the end of World War II. Historians from both countries spent some four years examining original sources to determine exactly what happened in Italy after the country's fascist government -- until then an ally of Nazi Germany -- changed sides in September 1943 and negotiated a truce with the Allies.

The more difficult the situation for German troops in Italy became, the more brutal their murderous behavior. They declared more than 600,000 Italian soldiers as "military internees," denying them the status of prisoners of war, and shipped them to Germany or the Balkans to perform forced labor. Thousands died.

The Germans also descended on the Italian civilian population with homicidal ferocity. One example is the "revenge operation" of March 24, 1944: Some 335 people were dragged to the Ardeatine Caves on the outskirts of Rome and shot before the caves were then blown up. To this day the victims are buried there.

One historian estimates that, on average, the Germans killed165 civilians, prisoners of war and military internees every day between Sept. 8, 1943 and May 8, 1945. That figure doesn't include victims from skirmishes between the German army and Italian soliders and guerillas. "The massacre was on the whole thoroughly organized and followed tight military procedure," according to Carlo Gentile, a professor of Italian history at the University of Cologne. It is even known who the killers are, along with their units, their commanders and other information. And yet there have still, to this day, been but a very few convictions.

For years after the war, political expediency dictated that the issue was largely ignored in Italy. In the postwar conflict between East and West, Germany was to be rearmed so as to play a meaningful role in the new North Atlantic Treaty Organization. Focusing attention on German war crimes would have generated substantial opposition among the Italian population.

Not a Single Verdict

Only much later did significant public pressure force Rome to initiate a handfull of proceedings -- and a few German perpetrators were finally punished. Erich Priebke, for example, one of the SS officers who participated in the Ardeatine Caves massacre, received a life long sentence. At the age of 99, he is still alive today and remains under house arrest in Rome.

In Germany, however, not a single, legally binding verdict related to the war crimes committed in Italy was handed down.

Resentment in Italy has occasionally boiled over. Such was the case four years ago, when Germany successfully avoided paying reparations to the relatives of murdered civilians in a case at the European Court of Justice. States are "immune" to such civil claims, Berlin's lawyers successfully argued.

Italians were outraged, and the German government made an effort to show some understanding. "The unresolved World War past holds some potential to strain German-Italian relations," said Michael Steiner, who was the German Ambassador to Rome at the time. But morality and justice must not be confused, he said. In an attempt to calm the situation, a historical commission was appointed to begin an "intensive, trusting dialogue."

This Wednesday when the report was presented, German Foreign Minister Guido Westerwelle said that he deeply regretted the "terrible war crimes" committed by the Germans in Italy. He also expressed an understanding for the anger of the Italian public over the ruling in the case against the murders in von Sant'Anna di Stazzema, he said.

There are now plans to erect a memorial at the site of the forced labor camp in Berlin's Niederschöneweide district to honor the fate of Italian soldiers captured by the Nazis. There is also be a small memorial created in Italy. 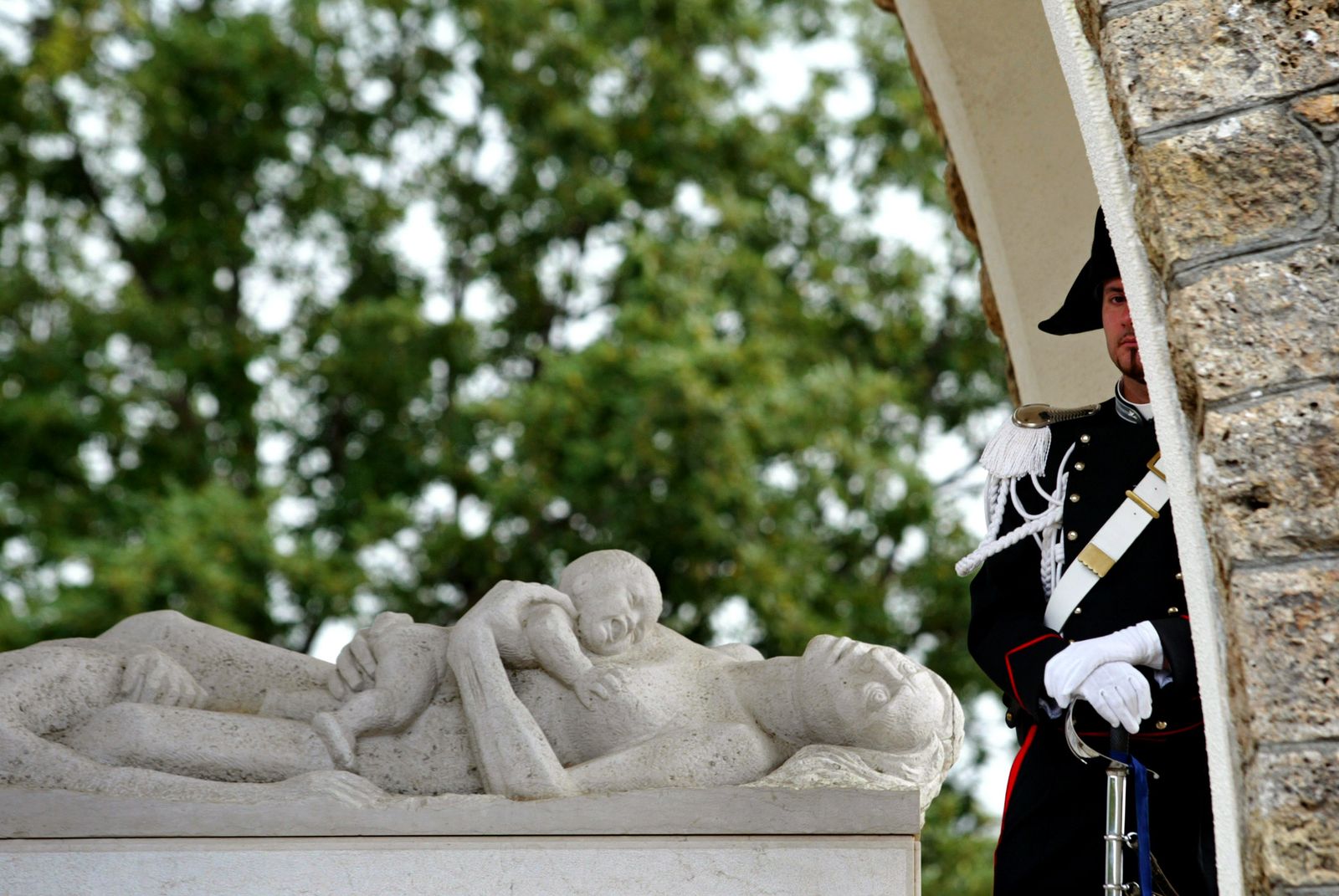 A momument to the victims of Nazi war crimes in Sant'Anna di Stazzema.