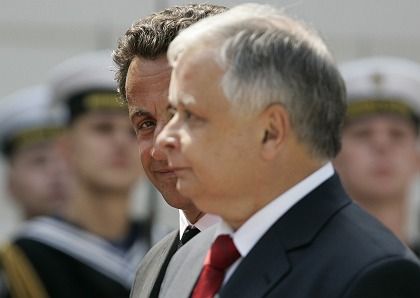 French President Nicolas Sarkozy was in Warsaw on Thursday to meet with his Polish counterpart Lech Kaczynski.

Perhaps the European Union will be able to agree on a new treaty after all. With time growing short before leaders from the EU member-states gather in Brussels next week to agree on a blue-print for future decision-making, Poland on Thursday signalled its hope that a compromise can be reached in its continued opposition to some elements of the draft treaty.

With newly crowned French President Nicolas Sarkozy in Warsaw to convince Poland not to veto the draft treaty, President Lech Kaczynski indicated that he is not interested in standing in the way of a solution.

"We don't want to be isolated. We want to achieve a solution," Kaczynski said on Thursday. "We want a compromise under which all countries will be happy."

The tone was a far cry from previous statements out of Warsaw. Poland had been fighting to change the draft treaty to raise its profile in the EU decision-making process. Kaczynski had even said that the alteration was "worth dying for." Still, just what the Polish compromise mentioned by Kaczynski might look like remains unclear.

Poland's apparent softening comes after weeks of growing pressure and pleas from around Europe. Indeed, prior to Sarkozy's Thursday visit, which commentators had seen as the last, best chance to lobby Poland to give ground on its position, both Austrian Chancellor Alfred Gusenbauer and European Parliament President Hans-Gert Pöttering had blasted Warsaw in the German press for its obstinacy.

Sarkozy himself had made clear what the tenor of his visit was going to be. "Poland cannot block the European Union," Sarkozy told the Polish daily Gazeta Wyborcza in an interview printed to coincide with his first trip to Poland as French president. "If every one of us shows total intransigence  the question arises: What are we doing together?"

After meeting with Kaczynski, Sarkozy's tone had noticeably changed. "I am confident that a solution can be found," he said in Warsaw. "We were not able to solve all of the problems, but I believe that we understand each other's points of view better."

German Chancellor Angela Merkel, current holder of the rotating EU presidency, had likewise urged her neighbors to the east on Thursday to compromise on their opposition to the new treaty. "We want to take a clear step forward next week. We want to agree upon a roadmap," Merkel told Germany's parliament, the Bundestag. She admitted that, with Poland, "a solution is not yet in sight."

Poland's beef is with the new rules on voting called for in the new draft treaty. Virtually unchanged from the previous "constitution," the treaty calls for laws to be passed with a double majority -- meaning at least 55 percent of EU member states representing at least 65 percent of its population would have to support a bill in the European Union Council for it to become law.

Even though the system gives Poland relatively generous voting rights -- 27 votes compared to 29 for Germany, the EU's most-populous country -- it would rather see votes calculated based on a country's inhabitants in relation to its surface area, the so-called "square root system."

The country has received some luke-warm support from the Czech Republic for its position, though many think that Prague might abandon Warsaw at the coming EU summit.

But Poland may not just be concerned about the intricacies of EU voting procedures. Austrian Chancellor Gusenbauer told the German daily Süddeutsche Zeitung on Thursday that the Polish government, led by President Lech Kaczynski and his twin brother Prime Minister Jaroslaw, may be unwilling to compromise because they don't want Germany to be the country praised for saving the EU treaty.

"One gets the impression," Gusenbauer said, "that Poland's leadership under the Kaczynski twins doesn't want to grant the Germans the success of injecting momentum into the reforms. They have harshly criticized the German (EU) presidency."

He also said that the Polish people were not completely behind their government. "Sixty-five percent are in favor of ratifying the treaty as it is. It is absurd: the most pro-European population has the most Euro-sceptic government."

Pöttering, who has been vocal in his criticism of Warsaw all week, once again lent his voice to the chorus of those calling for compromise. "I sincerely hope," Pöttering told the German paper Passauer Neue Presse, "that the Poles realize that they can't go it alone against all the other member states and EU institutions."

There is hope that Poland now might back away from its threats to block the treaty. But the damage in relations with the rest of the EU may already have been done. In addition to saying he was anxious to avoid isolation, Kaczynski also added that Poland "will not be threatened."