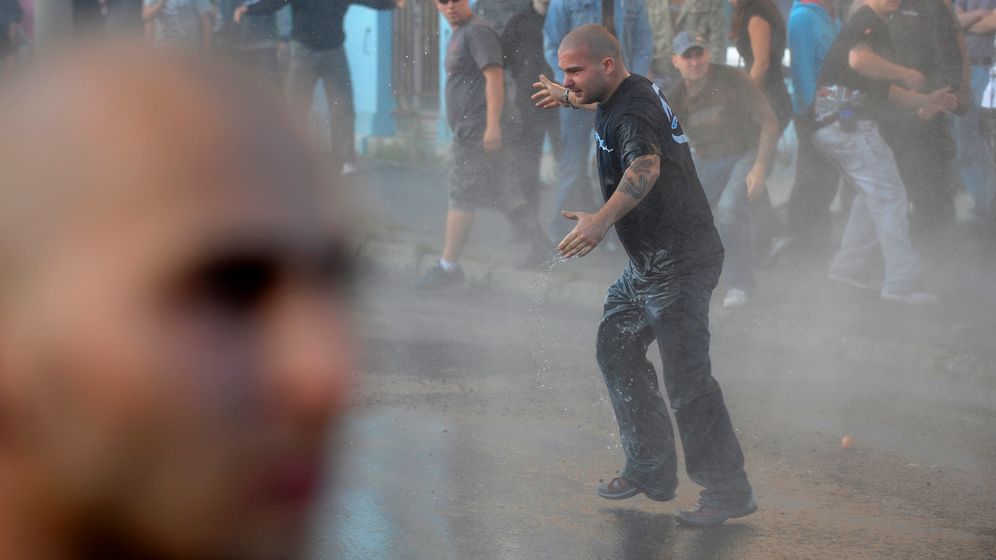 No, Jindich Nestler wouldn't call himself a racist. "The good gypsies can stay," he says. "But most of them are lazy or criminals or even terrorists. They have to disappear."

Nestler is a 36-year-old official of the far-right "Workers' Party for Social Justice," or DSSS, by its Czech initials. DSSS is a successor party to the neo-Nazi group Dlnická Strana (DS), which was banned a year and a half ago by the highest Czech administrative court. One reason the court gave for the ban was that Dlnická Strana organized rallies that led to pogrom-like riots against the Roma.

For the last several weeks, far-right extremists have been back on the offensive. They're worried -- again -- about the Roma minority in the Czech Republic. In a part of Bohemia called Šluknovský výbžek, near the border with the eastern German state of Saxony, a bitter feud is raging between ethnic Czech locals and several hundred Roma. Interior Minister Jan Kubice has sent a detachment of 250 police to the region to quell any more problems, but he's had to admit that the situation had lurched out of control.

So far, the massive police presence has not calmed things down. One center of violence is Nový Bor. Some 300 neo-Nazis, most of them young men with bald heads and black jackets, marched alone last Saturday through the small town roughly 50 kilometers (31 miles) from the German border. The right-wing extremists chanted "Gypsies must go" and "Free, social and national" -- a phrase also used by members of the right-wing extremist National Democratic Party of Germany (NPD).

"We are the voice of the people," claimed Nestler, the DSSS official. And several hundred locals, in fact, stand by the road to applaud the neo-Nazis.

Machetes in a Bar

Around 600 police officers, many in riot gear, tried to keep the situation under control. Some German police also stood at roadblocks on the road to Nový Bor. "We're here to give administrative assistance," one female officer from Saxony said.

By the end of the day, more serious outbursts of violence had been sparked a few kilometers away. Such strong anti-Roma sentiment has generally been associated with other parts of Europe, like Hungary, where for years bloody riots against them have taken place. But the current outbreak started several months ago, when more and more Roma families started moving to Šluknovský výbžek.

Police noticed a sharp uptick in crime -- theft above all -- and at the start of August, several Roma boys armed with machetes attacked a bar in Nový Bor, where a fight had previously broken out between Roma and some other guests. "You white pigs," the young men reportedly hollered; three patrons were injured.

The far-right DSSS likes doesn't mind fanning the fears of ordinary Czechs. Tomáš Vandas, who leads the party, likes to sharpen the tone. He's declared Nový Bor the site of a "battle for the future."

Roma representatives, on the other hand, complain of exposure to a constant discrimination which has never been taken seriously by Czech society. Neo-Nazis threw Molotov cocktails at the house of a Roma family in the eastern Czech town of Ostrava, for example. A two-year old girl suffered serious burns.

The Roma in Nový Bor sit in front of a dilapidated barracks on the edge of town. No one wants to talk with journalists. "Please don't take our picture," a young woman says.

A social worker, who doesn't want to be named, points at the house. The living conditions are catastrophic: Some families with two children live in single rooms. "Of course a lot of Roma are criminals," the social worker says. But she can't stand the DSSS. "You lock people in a place like this and you wonder why they have social problems."

Around 250,000 Roma live among 10 million Czechs, and it's no coincidence that more and more of the ethnic minority have come to this part of northern Bohemia. There are 300 similar slums around the country. Several can be found in big-city centers. Real-estate companies pay the Roma -- or offer to forgive their debts -- if they abandon potentially lucrative buildings in city centers and move to remote regions near the German border. The companies even bring them to specific abandoned houses, then charge high rents -- or even claim welfare subsidies directly from the state.

Some homeowners "exploit" the Roma, says Martin Šimáek, director of a state agency for social integration. Real-estate speculators charge them unprecedented, sky-high rents and excessive rates for water and power, he says. "This leads to unrest and creates problems for coexistence throughout the entire town," Šimáek told a Czech radio station.

Jirí Moravec won't deny these root causes for the violence. He's the head of the DSSS in Varnsdorf, 20 kilometers north of Nový Bor, right on the German border. "A lazy government and clever real-estate firms have brought us the Roma problem," he admits. "Now we have to take the law into our own hands."

Moravec won't elaborate on just what he means by this, but what he could be alluding to is on display the following Sunday. Dozens of neo-Nazis tried to storm the former Hotel Sport, where Varndorf's Roma live. The ground floor of the collapsed building had been walled shut; heavily armed police secured the surrounding streets. Officers in civilian clothing guarded the door. The extremists didn't seem to mind. They threw stones and firecrackers at the guards. Officials only managed to drive away the DSSS members with firehoses; police said 41 arrests were made.

To enter the Hotel Sport you have to climb into the rear courtyard. A man named Roman sits there. He's 27 and unemployed, like most of the hotel guests. When Roman receives money, he sends a friend to a nearby supermarket for food. "I'm a gypsy, no one would ever give me a job," he says. Even black-market construction work goes to Ukrainian workers before it would go to him, he says. He and his wife and their two kids need to get by on 2,000 koruna per month (about €80 or $112).

He doesn't want to blame all his Czech neighbors wholesale. But he says about half the people in Varnsdorf are racist. "I'm a gypsy," Roman says again. "When it gets to be too much, I just move to another country."